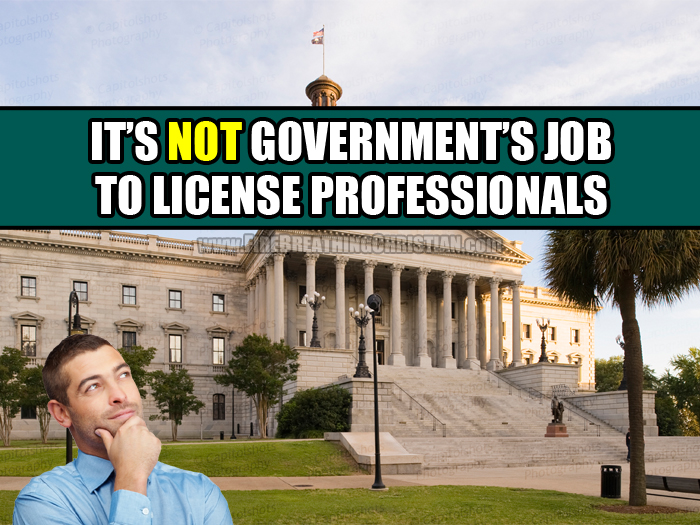 Free men and women don’t go to the State for permission to pursue a profession.

They simply pursue the profession.

Free men and women aren’t required to submit to the State in order to earn the right to use their God-given talents and abilities.

They simply use their God-given talents and abilities.

Free men are – get this – free to use their God-given talents and abilities to pursue professional activities knowing that other free men and women will test, judge, reward, and/or punish them according to standards of quality and honesty freely established in the free market.

See how this freedom thing works?

See how it just cuts the State out entirely where things like regulating and licensing professions are concerned?

If you do see how freedom works in this most basic sense, then you should also be able to see why the State hates freedom.

The State desperately wants you and I to believe that without the State there to “protect” us from unqualified, shabby, deceptive, dishonest people by way of State licensing, State regulation, and State control over every meaningful aspect of economic life and culture, we would suffer immense unnecessary harm. . .

. . . as if we’re incapable of establishing things like standards, regulations, licensing bodies, and regulatory agencies on our own as free people apart from the State.

. . . as if voluntary organizations and free associations simply cannot produce high standards of quality and safety.

. . . as if “freedom” and “liberty” itself are the property of the State rather than the people living under the State.

It’s amazing to see just how shell-shocked and confused even the typical politically active “conservative Christian” becomes when the State’s presumptive regulatory role in the professional lives of people is challenged at its foundation – a foundation that has become so blindly assumed after generations of State-run “education” that just noting its existence if often quite jarring for the average American “conservative”.

Even though Scripture gives no warrant for State management and control over professions and careers, we have been convinced to assume such State control as being necessary to the health and progress of culture and civilization.

But what if Scripture is correct in its description and limitation of civil government (the role of the State)? What if God’s Word on these things really is the perfect, sufficient path toward the type of civil government that actually promotes true freedom, liberty, prosperity, and security?

We touched on this aspect of government last year in Why not revoke the government’s license to issue licenses?, where we asked and explored some relevant questions:

“What could be more idiotic than the notion of requiring a professional to attain a license from the U.S. government in order to practice their craft in “the land of the free”?

And we should never give it that power again…even if it does one day learn the difference between a boy and a girl.”

We really do need to ask ourselves the question: Do we want to be free?

Or do we want the sort of counterfeit freedom routinely dispensed through unbiblical approaches to State power?

Do we want to have a vibrant, beautifully diverse culture in all the right ways?

Or do we want to be the kept cattle of a culture going to hell on a rocket fueled by pride, arrogance, and open rebellion against God?

Do we want to recognize and repent of our idolatry of the State in America?

Or do we want to prop it up and try to “make it work”?

At this point, it seems as though most definitely want to prop up the idol and “make it work”, which only delays the inevitable and amplifies the consequences to life and culture when the America Idol finally does come crashing down.

During this time before that fall, however, we’ve all been graced with an incredible opportunity to contemplate and prepare for what’s coming.

Two things that we should be contemplating is the role of biblically sound government and the consequences of unbiblical approaches to government so that, in whatever landscape we find ourselves occupying after the fall of great idols in the land, we are well equipped to lay a new and solid foundation upon which to build the beautiful culture and civilization that will one day rise over the rubble of what came crashing down before.

In that context, the hope in this series of articles is to consider ten things that are not the job of the State.

We began last week in It’s Not Government’s Job To Protect Us From Weeds and we hope to run through eight more after this one, culminating in a handy, easy to share Top Ten post that will provoke thought and, Lord willing, positive action.

Thank you for your interest in true freedom, liberty, and adulthood. May God soon grace us with the opportunity to pursue such things unfettered by unbiblical approaches to civil government.

In the meantime, we have a lot of work to do, so…