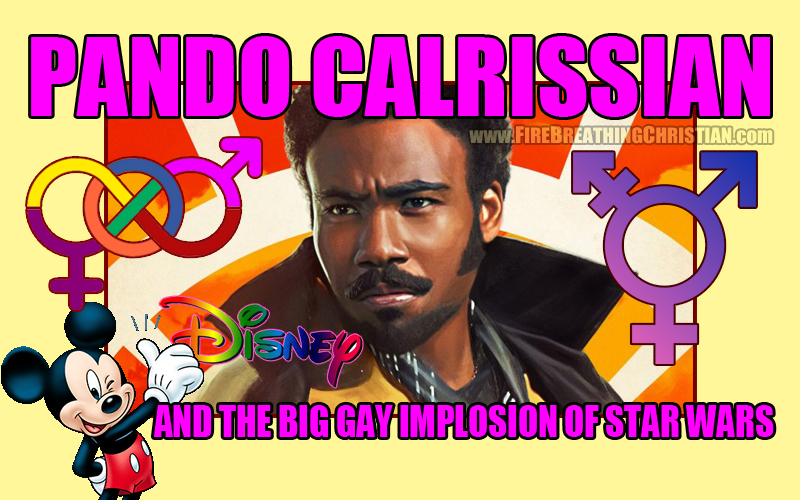 Let’s begin with the obvious: Disney loves to sexualize children.

Disney also loves to bring chaos (“fluidity”) to the foundations of healthy sexuality, healthy family life, and healthy culture in general both through the sexualization of children and as the means by which more and more children might be sexualized in the future.

So now that Disney owns Star Wars we shouldn’t be the least little bit surprised that it’s in the process of molesting, perverting, and corrupting the once brilliant franchise into a tool for the promotion and normalization of rank sexual depravity.

The latest example comes by way of the new Solo: A Star Wars Story flick coming out this weekend, which features Donald Glover playing a young Lando Calrissian, who we are now being told (and emphatically confirmed) is “pansexual”.

Who is telling us this?

“Co-writer Jonathan Kasdan says yes. He “emphatically” confirmed to HuffPost last week that the suave smuggler, played in “Solo” by Donald Glover and in the original trilogy by Billy Dee Williams, is pansexual.

“There’s a fluidity to Donald and Billy Dee’s [portrayal of Lando’s] sexuality,” Kasdan said. “I mean, I would have loved to have gotten a more explicitly LGBT character into this movie. I think it’s time, certainly, for that, and I love the fluidity — sort of the spectrum of sexuality that Donald appeals to and that droids are a part of. He doesn’t make any hard and fast rules. I think it’s fun.”

Yay for gayness, polygamy, pedophilia, and sex with robots and/or anything/anyone else!

So says Disney…and make no mistake, they’ve been saying these sorts of things about Star Wars’ “new direction” since they purchased the right to rape and pillage the franchise.

As we noted back in February of 2016 in J.J. Abrams Prepares to Sodomize Star Wars:

“J.J. Abrams is paving the way for Star Wars to be sodomized.

In the months since the release of Star Wars Episode VIII: The Least Jedi, a huge portion of the Star Wars fanbase has been pushing back against the ridiculously flagrant SJW/Feminist/Pansexual flavor of Star Wars’ new direction as dictated by the Mickey Mouse Club.

This has led to amping up of the whole “you must just be afraid of strong women/gays/pansexuals” line in response from Disney and its shills, but the tactic isn’t working and the Star Wars ship once thought an unsinkable vessel of perpetual profit and cultural influence is taking on water fast.

It’s actually sinking, and much more quickly than anyone would have imagined possible just three short years, and three terrible films, ago.

But are the SJW goons and pansexuality advocates driving the creepy white Mickey Mouse van down the street trolling for kiddies reversing course or even slowing it up a bit? Are they backing down?

They’re not backing down.

They’re doubling down, as reflected in a recent tweet from Disney’s Kasdan:

“Sorry to have brought identity/gender politics into… NOPE. Not sorry AT ALL ’cause I think the GALAXY George gave birth to in ’77 is big enough for EVERYONE: straight, gay, black, white, brown, Twi’lek, Sullustan, Wookiee, DROID & anything inbetween. #droidrights #weAREsentient”

Sex with whatever/whomever/whenever is just a part of the deal, and if you don’t like it, you’re the problem.

If you’re not down with homosexuality and pedophilia, among other (literally limitless) options, you’re bad.

This is the new spirit of Star Wars.

But before you let it get ya down, remember: It will die, and soon.

The question then becomes: What we as Christians will do?

Will we create and nurture the next culture moving sci-fi mega-franchise?

Or will we keep running away from such challenges and let the culture continue its rocket ride to hell around us while we wait to escape by way of “the rapture”?

Maybe, just maybe, Christians will finally step up to the plate, write some excellent sci-fi, produce some excellent films, and, you know, take the Great Commission seriously when it comes to engaging every area of life for Christ so that we might actually have the thriving culture that must inevitably flow from such an approach.

Wouldn’t it be cool – and beautifully ironic – if that giant u-turn in Christian thinking (and action) was the greatest lasting legacy of Jon Kasdan and Pando Calrissian?