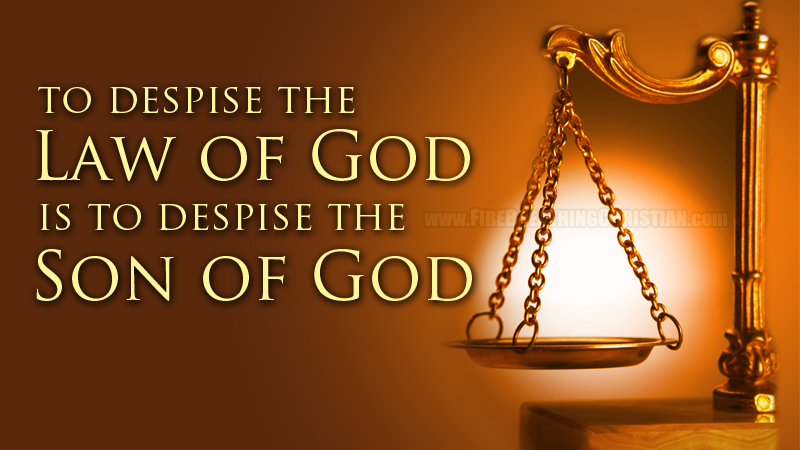 We don’t hear that much from American church pulpits these days, do we?

Yet few truths are more clearly conveyed in God’s Word.

Again and again, Jesus is described as the embodiment and fulfillment of what? The Law.

Again and again, Jesus warns us not to think that He has come to abolish the Law (Matthew 5:17-18).

Again and again, Jesus describes His Gospel-fueled Great Commission as being centered on teaching everyone everywhere to obey His every command in every area of life (Matthew 28:18-20).

Because His Law is life.

Because all of His creation is defined, sustained, and consecrated to the service of His Nature (Colossians 1:15-20).

That’s why it’s completely and perfectly loving to drive people toward His Word and His Law as the only means by which they might find true peace, love, prosperity, security, and joy anywhere in His creation.

This is why Jesus loves the Law.

This is why King David loved – and gushed on at length in song – over the matchless beauty displayed in God’s Law.

This is also why we are told again and again that those who claim to love Jesus while rejecting or dismissing His Law are, in fact, liars (1 John 2:3-6).

To truly love Jesus is to desire to know Him more and more accurately as He has revealed Himself in His Word.

To truly love Jesus is to submit to what we learn of His Nature through His Word, growing in love for what He loves, and growing in hatred for what He hates.

To truly love Jesus is to sincerely love His Law.

To have been truly saved by Jesus is to have been transformed by His grace alone from a self-centered creature hell-bent on rebellion against His rule into a spiritually resurrected, Christ-centered being who clings to him lovingly as the source and sustainer of every good thing in creation.

While we are certainly not saved by obedience to the Law (we can only be condemned by it apart from Christ’s supernatural saving grace in our lives), we are just as certainly saved unto obedience to the Law. This obedience is not the means by which we preserve or earn our salvation. It is not pursued out of dry, legalistic obligation to the Judge above us. It is instead embraced as a life long mission born of love for the One who saved us even while we still hated and rebelled against Him.

But these days in a (not so coincidentally) dying American culture, few pulpits preach the truth of God’s Law, preferring instead any of a million cheap, easy, and lawless counterfeits in its place.

This is one of the most obvious and flagrant signs of God’s judgment upon America.

Enter: Psalm 2 (For more on this, please read Want to see America in Scripture? Try Psalm 2.)

We’re getting exactly the rapidly disintegrating zombie culture that most of our “Christian conservative church leaders” have been begging for over generations of practical abandonment and rejection of God’s Law.

And here we are.

So what are we supposed to do about it?

Wait for the rapture?

Instead, we’re supposed to embrace the mission and the great opportunity before us to explore, learn, and share the beautiful, deep, life-resurrecting power of Jesus’ Nature as revealed in His Word and Law.

Back in 2015 in an article entitled Presuppositional Law: Where we begin with law determines where we end., we tried to helpfully address the subject of how law and culture function in God’s creation:

Law belongs to God. It is a reflection of Him in His creation. It is born from, bound to, defined by and dependent upon His Nature.

What else could we have ever expected from a land proudly and defiantly built upon the “virtue” of religious pluralism? What else could have ever come to any land whose people claim the “right” (God-given, even) to openly worship false gods?

This is the lesson of America…a lesson that the Church is well served to note and apply as we move forward through this temporary wreckage and toward the supernatural victories and restoration to come, all by His grace, all for His glory, and all to the eternal benefit of His people.”

Jesus really is the personal and exclusive way, truth, and life of law, politics, education, economics, and everything else in His creation.

The sooner we submit to that inescapable, unbreakable, and incomparably beautiful truth in legal, political, economic and educational practice, the better.