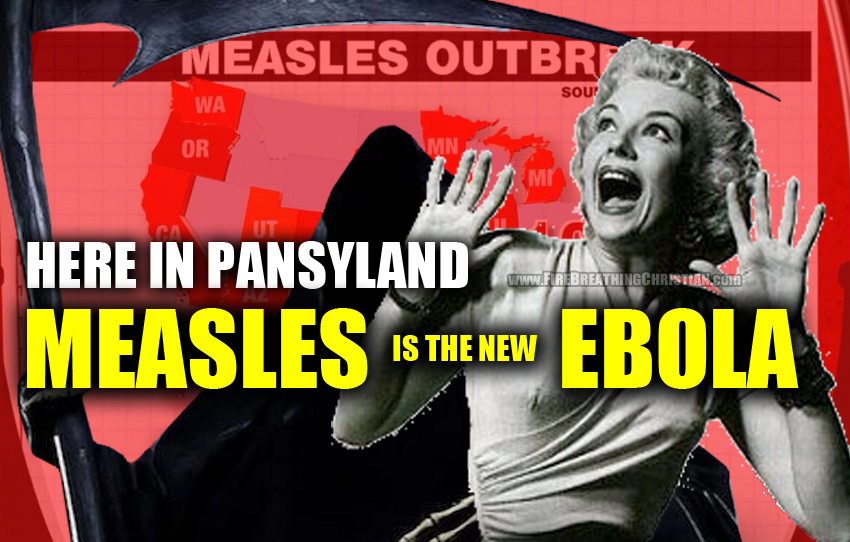 If there was any doubt remaining as to whether the “professionals” permeating mainstream media were little more than moronic drones programmed and deployed by their corporate masters to mindlessly spew wave after wave of increasingly imbecilic propaganda for the purpose of nudging us toward an age of complete childlike dependence upon the matriarchal Mommy State, one need only consider…the measles.

Which is basically Ebola in Snowflake America.

Worse, apparently, based on the coverage Ebola actually got from the genius guardians of truth in mainstream media when the infamously hellish hemorrhagic fever-inducing virus arrived in America a few years back. We were assured at the time that it was no big deal. Sure, it may have a fatality rate of 50% or more, and it may have earned a grisly reputation for quickly and efficiently killing people by having them dramatically bleed out of their pores and various orifices in agonizing fashion, but no worries. Nothing to see here.

But the measles…well…that’s a whole ‘nother story…

The measles are serious, you see.

A regular existential threat to humanity.

At least that’s what the “experts” and “professionals” in mainstream media seem to want us to think.

Check out this brilliant bit of work from ABC “News” earlier this week under the headline “Measles cases confirmed in 3 new states amid Washington outbreak”:

“Health officials in Georgia, Hawaii and Oregon have now reported that there have been at least one — if not multiple — confirmed cases of measles in their states. . . “

Gotta love the “if not multiple” insertion there. As in: There might be more than one case of measles involved. [insert shriek of horror here]

“This comes amid an outbreak in Clark County, Washington, where there have been 38 confirmed cases of measles and 13 suspected cases. . . “

Yes, this article is centers on an outbreak totaling 51 cases…at worst…

“The presence of the highly-contagious disease in other states is prompting warning calls. . . “

“Highly contagious”…like Ebola, the 50+% fatality rate virus we were told not to worry about by the same “experts” a little while back?

Or maybe just the kind of “highly contagious” needed to help scare us into a vaccine product or two or…maybe 2-3 dozen by the time your kiddo is 15 months old. (Yes, I said months.)

“This active cluster comes on the heels of 187 confirmed cases of measles in New York State this winter clustered in New York City and Rockland County in unvaccinated communities. . . “

They’re way more dangerous than Ebola…not that Ebola is all that dangerous, especially when compared to measles.

The ABC “News” idiocy rolls on:

In Hawaii, state health officials warned that two unvaccinated visitors traveled to the Big Island and had confirmed cases of measles. These two cases are connected to the outbreak in Clark County.

The individuals, whose genders and ages were not released, “were exposed in their home state to an infected international guest,” Hawaiian state epidemiologist Sarah Park wrote in a letter to health providers, which was obtained by ABC News. . . “

First off, what’s a gender?

Remember: The same morons/”professionals” who write this most humorously incompetent of propagandistic bilge also think  – and insist that we all think – that Bruce Jenner is a woman.

Interestingly enough, the fundamental craziness of these people on both TransJennerism and the measles has been on full display for years. Back in 2015 in a post soothingly entitled MEASLES!!! RUN FOR YOUR LIVES!!!, we chronicled the unintentionally comedic “pro” media spin on measles as follows:

“Can you feel it?

1. The System is desperate. I mean, the measles?! Time is slipping by and people are waking up. The State and Statists are making mad, measley grabs for power while they can, because they know that trends are working against them. They have to move quickly and they know it. Hence: The Great Measles Apocalypse.
.

2. Popular propagandists on the secular Right are being revealed as every bit the Statists as those on the Left. Fox News “conservatives” like Megyn Kelly are increasingly coming out in MSNBC-esque support of State-as-parent positions. This is only helping the awakening process mentioned in point #1.
.

3. The overall stupidity of the State- and Corporate-contrived and controlled artificial culture in which we have been submerged is being made apparent. While the vast majority of people are still clinging to their denial and idolatry of The Matrix, more and more are being shaken into consciousness by the grace of God through the flagrant idiocy of the pagan worldviews trying to hold them down and keep them in the system. The biblical foolishness of unrepentant man really is highlighted quite beautifully in situations such as The Great Measles Apocalypse.

Powerful for the moment, to be sure, but desperately and terminally foolish nonetheless.”

Remember always: The Category 5 stupidity of these people infects every subject that they touch, and the disease they spread only gets worse and worse until it either, A) finishes off the host culture, or B) is identified, isolated, and excreted as the toxic waste that it is.

So the next time you read some similarly insane bit of Measles As Ebola “professional journalism” from the nutcases manning the propaganda cannons for Big Brother, remember to wash your hands thoroughly while laughing out loud.

Then flush and get on with life.