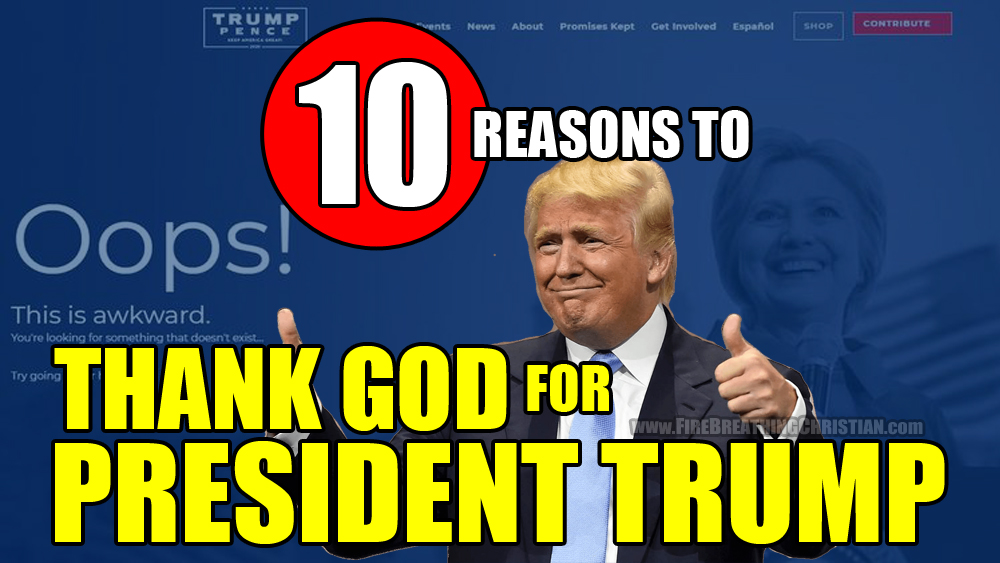 With the Deep State deploying its Fake News and Leftist pop culture assets for yet another desperation assault to take down the President, it seems like a good time to take stock of the many significant reasons We the People should thank God for President Trump.

While I’ve expressed many serious concerns about Mr. Trump in the past, and the fundamentals of those concerns still exist, I’ve been very impressed with the way he’s handled several important subjects and opportunities. For all of his faults, which are numerous and often quite well documented, he’s already accomplished much more than seemed even remotely possible just…well…roughly three years ago. Not to lay it on too thick, but as his first term has rolled on, I’ve become convinced that the man is a genius.

A proud genius who needs to repent and do his best to lead this proud, dying nation to do the same? Yes.

But a genius nonetheless, all by God’s grace and ultimately all for God’s glory, whether President Trump (or anyone else) likes it that way or not.

That said, as the Deep State and its numerous tools take their next flurry of flailing swipes at President Trump, I’d like to offer a list of reasons why you and I should thank God for this particular President, even if, like me, you didn’t vote for him. The list is not intended to be comprehensive, of course, though I’ve tried to arrange it in order of importance (from my perspective, anyway), building up from #10 to #1. I’m going to keep the descriptions fairly brief, though I’ll probably elaborate on specific points in future posts. Finally, in a spirit of full disclosure, I should admit up front that a couple of the entries are actually 2-for-1 tie-in deals, so keep that in mind. (Yes, that last item is kind of a cheat, but hey, we’re talkin’ politics, right?)

Before getting into the list, let me cheat one more time by adding a general thought that could well be included as a major reason to thank God for President Trump: The man is a fighter. A serious fighter. In many ways, he’s an inspiring example of just the sort of bare-knuckle, bring-it-to-the-enemy brawler that we need right now. His tenacity and bulletproof persona have allowed him to expose the globalist/Marxist Left as nobody else on the world stage has come close to doing in recent memory.

Along these lines it’s also worth noting that Mr. Trump needs none of this stuff. The man is a billionaire who could be spending his time doing almost anything that he (or any other living human) can imagine. Yet he chooses to go to the heart of Mordor and at least try to drain The Swamp. Now that’s impressive!

That said, let’s get on with the program…

Ladies and gentlemen, I offer for your consideration these Ten Reasons To Thank God For President Trump:

10. The Bizarre Beauty of Stage 1 Trump Derangement Syndrome – Leftist heads across the nation and the globe nearly exploded en masse on Election Day 2016. Really. It was a magical night that way.

9. The Promise of Stage 2 Trump Derangement Syndrome – Leftist heads across the nation and the globe are likely to actually explode en masse on Election Day 2020.
.
Try to imagine, if you can, a meltdown that makes the mass Leftist breakdown of 2016 look chill and downright reasonable by comparison, as if the Left’s reaction to 2016 was an inspiring display of responsible, mature adults who calmly processed and respectfully accepted the verdict of fellow citizens in a manner that acknowledged understandable disappointment in defeat while accepting that defeat with honor and dignity. Okay, after you finish laughing, take a deep breath and try to imagine a mass Leftist meltdown roughly 10,000% more dramatic and hysterical than that offered up by Team Hillary in 2016. It’ll be at least that much worse (or better, depending on how you look at it) for the Left when President Trump is re-elected in 2020.

8. President Trump’s reshaping of U.S. courts. While it may well yield far less significant action than it should, the fact is that President Trump has already profoundly impacted the composition of federal courts in (what should be) a very favorable way, which is (or should be) a big deal since the Left has relied on the court for generations now to impose its radical agenda against the will of the vast majority of U.S. citizens.

7. President Trump’s exposure of the Establishment GOP brand as just as Swamp-based and Swamp-protecting as Establishment Democrats. The Progressive Political Left and Progressive Political Right are two wings of the same dragon. In both intentional and unintentional ways, President Trump has made the inherently evil/globalist nature of both major political parties plain (at least as they were composed before Trump’s election).

6. President Trump’s exposure of the Fake News Propaganda Complex (largely through his mastery of social media) – The “Fake News” label is but one great example of many Leftists propaganda tools that have backfired spectacularly on the Left as they’ve attempted to deploy them against the President. President Trump’s ability to catch an arrow shot from his enemies, reshape that arrow into a cruise missile, and then launch it right back at the enemies who inadvertently gifted it to him has been nothing short of awesome to behold. His ability to use Leftist Big Tech tools against the very elites who provide them has also been inspiring on many levels. Sure, sometimes The Most Powerful Twitter Feed in the Universe gets a bit off track, but overall (and far more often than even many Trump fans appreciate) President Trump is proving to be something of a Jedi-level master when it comes to social media, which has proven incalculably valuable in allowing him to either bypass or manipulate the Fake News Propaganda Complex as needed.

5. President Trump’s exposure of several tech giants’ radical Leftist political agenda and open disdain for the free flow of information and opinion. Thanks in large part to President Trump, Facebook, Twitter, and Google, to name a few relevant Big Tech overlord wannabes, are now commonly and accurately perceived as Deep State Fake News tools committed to the suppression of dissent from their Orwellian/Progressive narrative. In this, the President has made yet another powerful case (whether fully intended or not) for the decentralization of power, and that’s a very good thing.

4. President Trump’s unabashed, full-throated rejection of globalism in favor of nationalism. Again we see the decentralization theme on full display here, and while great evils have been and continue to be done in the name of nationalism (or through national-level institutions), movement from globalism toward nationalism is movement in the right direction.
.
The Deep State is thoroughly globalist, as are most Progressives and other Marxists. President Trump’s nationalism is arguably the thing they hate most about him (which is saying something, considering the loooooooong list of things they hate about the man).

3. President Trump’s general resistance to the Neo-Con/Liberal Establishment’s relentless push for new and/or perpetual wars. Neo-Cons want war in Iran, Russia, Syria, Afghanistan, and various other places while ramping up for war with China. Even the Establishment Left is now angling for war in many of the same places. It’s a straight up miracle that Trump has managed to resist the relentless call to war from all sides/puppets of the Deep State.
.
Put another way: Buh-bye, Bolton. Don’t let the door hit you on the way out.

2. President Trump’s ongoing attack on the Federal Reserve (and shifting at least toward a gold standard). This is yuge. The black magic fiat currency that fuels our ever-growing Orwellian welfare/warfare state is also the peg upon which the entire global fiat ponzi scheme hinges (for now, anyway). Trump’s increasingly heated war with The Fed is one of the most encouraging developments in U.S. (and global) politics since The Fed was unconstitutionally empowered over 100 years ago. (For more on the significance of this issue, please check out Fiat $lavery: We have been bought and paid for…with nothing.)

1. President Trump’s prevention of President Hillary. Am I endorsing the “lesser of two evils” approach to voting that’s led us down the rathole of increasingly Orwellian statism by constantly justifying terrible options as candidates that we “must support” simply because the other major Progressive party’s candidate is even worse? Nope. Am I glad that Donald Trump is in the White House rather than Hillary Clinton. Yes, and yugely so – at least 1,000%.
.
While we’re on the subject, this seems like a perfect opportunity to close with a shot of what I believe to be one of the most brilliant design concepts to hit the interwebs in a very long time, courtesy of the Trump/Pence campaign site…: 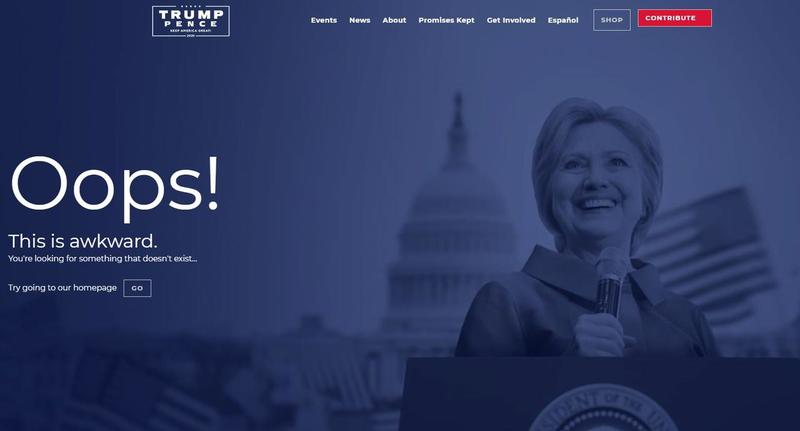 Please pray for President Trump’s salvation, repentance, and personal reformation so that he might, by God’s grace, strive earnestly to lead our proud, dying culture toward true, loving, and complete submission to Christ as King in every area of life…while there’s yet time…