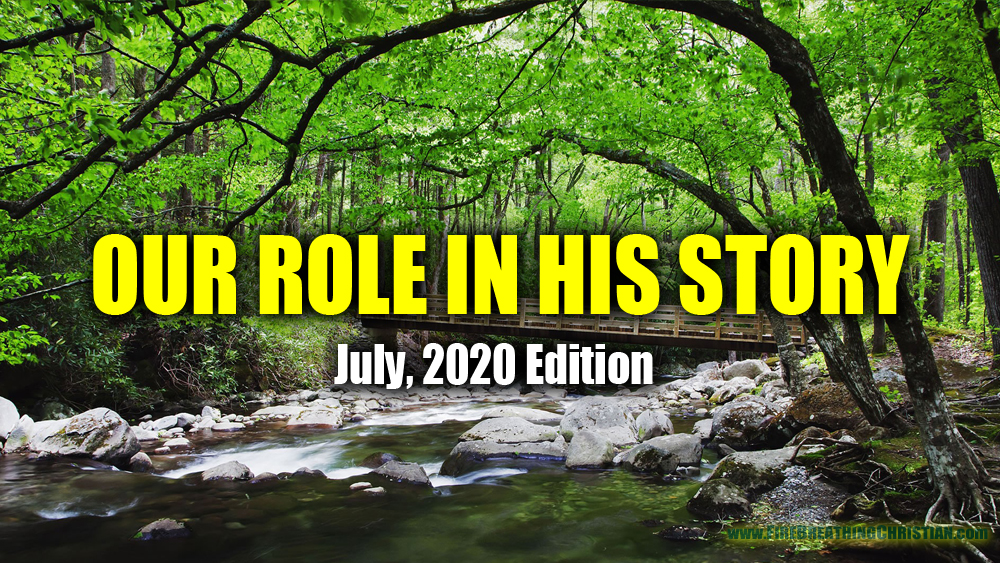 “A hundred years from now, there will be history professors who specialize in the study of one quarter of the year 2020.”

I remember instantly thinking, “Yeah, that’s about right” as I read that a few weeks back, on Twitter I think. It’s a paraphrase, but you get the idea: We are living in an amazing time – the kind of time when things shift into a crazy high gear, unleashing changes of great significance in a quantity and at a pace that seemed unthinkable just a short while back.

A certain Lenin quote leaps to mind in this context, especially with so much of the craziness unfolding now having its roots in the Marxist/Wokeness vibe that has been metastasizing in the land (and its churches) for generations: “There are decades where nothing happens; and there are weeks where decades happen.”

We are living in one of those high-octane, open-the-floodgates times now.

This is an exciting point in history in many ways, and as I write here in the late evening of Saturday, July 25, 2020, I want to find a way to convey the excitement, happiness, and confidence that I have even against the backdrop of a whole lot of dark drama and flat out craziness swirling about and seeming to intensify by the week, if not by the day.

I’m excited because of the opportunities that are now coming into focus – opportunities so great and numerous that it’s hard to believe.

I’m happy because of the good things that will soon come through the dark times we face now, even though there will no doubt be great pain along the way.

I’m confident because I know that all of this apparent chaos is ultimately purposeful and will benefit God’s people – and this confidence doesn’t linger up in the clouds of that concept at the macro level. Rather, it’s rooted in the knowledge that King Jesus is actively engaged at this very moment in the process of redeeming his creations of economics, politics, education, art, and everything else in every vivid, infinitesimally small detail, and that me and my family, if we’re taking Him at His Word and are guided by His Spirit, can expect to find incalculably valuable detailed information in that Word as to how we can play a very real role in the redemption of those areas of His creation in accordance with His Gospel-fueled Great Commission.

So yeah, I’m excited, happy, and confident that the zombie apocalypse is on the horizon, if not yet completely upon us.

These remarkable, historic times in which we have been providentially placed have inspired me to shift, plan, and prepare new schedules and new strategies for new adventures that I hope will be beneficial to the cause of advancing the Kingdom right here and now in the middle of Hurricane 2020 (likely to be followed by an even larger Hurricane 2021).

This vibe had taken root in my life and home a little while before I shared the post entitled What I want my kids to know about how I saw the world on April 4, 2020. Since sharing that post, I’ve been prepping new projects and material (some of which I will write about soon), but all along the way I’ve been feeling a pressure to record and share some thoughts on the different areas of madness/opportunity blowing up all around us.

So here I am now, composing what will surely be much more of a stream-of-consciousness deal and less structured of an article than I usually aim for, asking for your patience as I touch base on some items that I think are noteworthy in the moment, hopefully with a thought and/or prediction attached that will make them at least slightly less boring than a bullet point list of obviously crazy things about the Year of our Lord 2020.

I’m also viewing this as a sort of quarterly installment on how I see the world and where I think things will go from here, perhaps having been prompted by that tweeted line to offer up real-time, in-the-moment thoughts for those professors to kick around a hundred years from now.

More to the point, I really want to preserve these thoughts for my children, grandchildren, and the future generations that flow through them, so that they might get a taste of how crazy, brilliant, prophetic, and/or clueless I was “back in the day”…July 25, 2020, to be precise.

So with that said, here we go…:

I could go on, and I look forward to sharing and interacting more with you in the future, but I’ll pause here and hang it up for the night.

Lord willing, I’ll be following up soon with additional details on other projects aimed at tackling the opportunities that God is placing before us at this point in His creations of time and history. In the meantime, have a great weekend, a wonderful Lord’s Day, and remember: He has us right when and where He wants us.