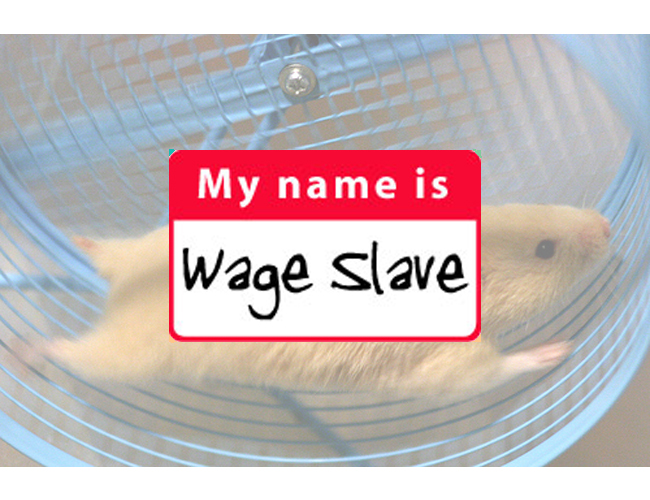 How do you destroy the beauty of labor?

How do you so radically corrupt every fundamental of economics that everything from investment and business practices to the work ethic itself is left in smoldering ruin?

How do you take such wonderful concepts as hard work, wise investing, and the pursuit of material prosperity – each of which are given life by God in His Word for the purpose of advancing civilization – and corrupt these beauties into rank tools of oppression and darkness?

Well, first off, you set aside that Word as your guide in these areas. That’ll pretty much do the trick right there.

Just ask America. (Or, more specifically, the powers that have been purposefully steering her in an explicitly anti-Christian economic direction for generations now.)

America should know by experience better than any civilization in human history that the first step toward economic darkness is the abandonment of God’s nature (as defined in His Word) as the ultimate, authoritative foundation in matters of money and business.

Our Purposeful March to Economic Oblivion

Economics, labor, the work ethic, sound investment principles…you leave these and all related things to be defined by the world. That is Step 1.

After that critical first step away from God’s nature as revealed in His Word is taken, then all bad things become possible.

While there are many downward steps that can follow quite naturally once Step 1 is done, we’d be well served to take a moment on this”Labor Day” holiday to consider what is likely the greatest and most destructive step taken in America’s approach to all things economic since we decided as a people to openly Him as our guide in economic matters.

The U.S. dollar as we know it is a currency based on nothing more or better than the “full faith and credit” of the United States of America. Since its introduction through the Federal Reserve Bank (which is not a bank, has no reserves, and is no more federal than Federal Express) in the early twentieth century, the U.S. dollar has lost well over 90% of its purchasing power through the purposeful transfer of wealth known as inflation. While initially the dollar was pegged to gold and silver as the objective foundation of its value, since Republican President Richard Nixon severed the dollar from the gold standard in 1971, the U.S. dollar has become free-floating; attached to nothing and limited by nothing.

The U.S. dollar is also the current global reserve currency, which means that it is recognized and used globally as the standard setter for all currencies. Foreign markets rely on the dollar as the standard against which they measure all other currencies.

This unique situation is why the dollar has been able to retain any real value while the powers that be continue to create trillions upon trillions of them out of thin air in order to facilitate their power over others.

Here we should pause to make one very simple, but very important thing very, very clear:

The purpose of any true fiat currency, like the U.S. dollar, is to produce fiat ownership of the masses. (See: Fiat $lavery: We have been bought and paid for…with nothing.)

The few with the power to create “money” out of nothing whatsoever are then able to effectively own the masses who must spend their life energy pursuing that which the few have created effortlessly.

This is a profound evil and it is the incontrovertible core of all fiat currency, certainly including the U.S. dollar.

The U.S. dollar could not be more diametrically opposed to the Lord’s will in the realm of economics, as it represents a complete repudiation and reversal of the crystal clear command of God in, among many places, Proverbs 11:1, which tells us, “A false balance is an abomination to the LORD…”

[Tweet “Fiat currency is crafted by some to enable their fiat ownership of all others. The US dollar is an abomination (Proverbs 11:1).”]

The same people who own this system of fiat currency also own the systems designed to distract us from this profound, fundamental biblical truth. Everything from CNN to Fox News to both wholly owned political parties in the controlled, contrived puppet show known as “American politics” is owned and operated by the people who have claimed for themselves the power to own everything and everyone beneath them…with “wealth” created from nothing.

Everything they do is aimed at keeping us all happy, content, malleable little slaves.

The more the system appears to “fail”, the more successful it truly becomes. As its systems constrict around our necks, forcing us to spend more and more of our life energy chasing after increasingly (and purposefully) devalued Monopoly money, the weaker our homes, families and communities will be come. We will become more and more dependent on the Corporate State, which produces its “wealth” out of thin air at the top, and we will be left with less biblically instructed and mature homes and families…all by design. (See also: Our Big Fat Greek Economic Future.)

As the only solution to this unfolding Orwellian nightmare in America is the faithful proclamation and application of the Gospel, we should find it anything but surprising that every part of the modern American Corporate State System is aimed at dismissing the Word of God entirely in practice while doing everything possible to prevent its slaves from finding the time to even begin to spend time in that life-giving Word.

Until and unless we repent of our rebellion and complicity in this wicked system of fiat slavery and apply the whole, undiluted Gospel of Jesus to every realm in His creation, including economics, slaves is exactly what we will be and what we will deserve to be.

So Happy Labor Day to you, my fellow slave.

May God soon grace His people with the Spirit and opportunity to break every rebellion-forged chain in creation (America included).