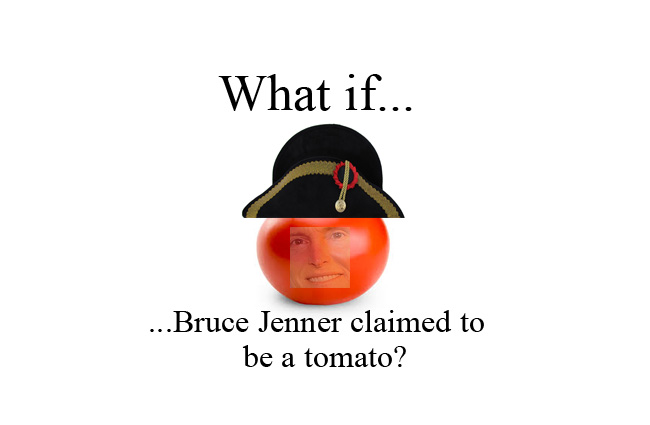 So what if Jenner claims to be Napoleon?

Well then, in that case, it seems clear now that by the “conservative Christian logic” employed by the likes of Rick Santorum, Jenner would then be a Napoleonic tomato woman.

The tragic/comedic reality as to what counts for “conservative Christian” perspectives and principles in America these days was once again highlighted by recent coverage of comments made by one of the many American “conservative Christian leaders” who is all about helping likeminded “conservative Christians” to remember that we must always be willing to set aside the crystal clarity of Scripture and rely on good ol’ secular pragmatism in order to get things done here in “the real world”.

According to an article published yesterday by Time (and covered broadly by many others), “conservative Christian leader” Rick Santorum – one of the guys to sign onto the also tragic/comedic “We will not obey!” proclamation that we covered here last week – has taken the politically pragmatic position that, “if [Jenner] says he’s a woman, then he’s a woman.”

This line of secular accommodation is accompanied hand in glove with its favored escort: an appeal to a satanic counterfeit of love:

“My responsibility as a human being is to love and accept everybody. Not to criticize people for who they are.” The former lawmaker is said to be eyeing a 2016 presidential bid after losing the 2012 Republican nomination to Mitt Romney.

Rick is being loving.

He’s just doin’ what has to be done to get votes and keep “conservatism” viable in America, dontcha know.

And if you don’t agree with his loving, strategic capitulation on actual Christian principles as defined by Christ in His Word, well, then you’re not being a very good Christian…as most modern American “conservative Christian leaders” define such things, anyway. And you probably hate children, kittens and bunny rabbits, too

You see, if you really loved Jenner – and America – you’d just let him be a woman.

To deny his claim to Napoleonic tomato-womanhood would be a crime against American-style freedom, liberty, and love, you see.

This is what happens to language, gender, family, patriotism and conservatism when we refuse to submit them to the Nature of God as revealed in His Word as our actual standard for testing all claims and concepts.

This is the kind of “leadership” that we are justly punished with when our itching little ears desire anything but the call to repentance and submission to Christ as King in practice in every realm of our lives.

This is the kind of delusional, destructive approach to “the real world” that we can expect to continue from our “good conservative Christian leaders” until we repent, believe, and reject the replacement of God’s Word with secular pragmatism in the name of satanic “love”.

Until and unless we repent and believe upon the Word of God as our guide to all of real world life in practice, the judgment of God will (and should) continue to pour out upon us, bringing us more “Republican Christian women” like Bruce Jenner and more “conservative Christian leaders” like Rick Santorum