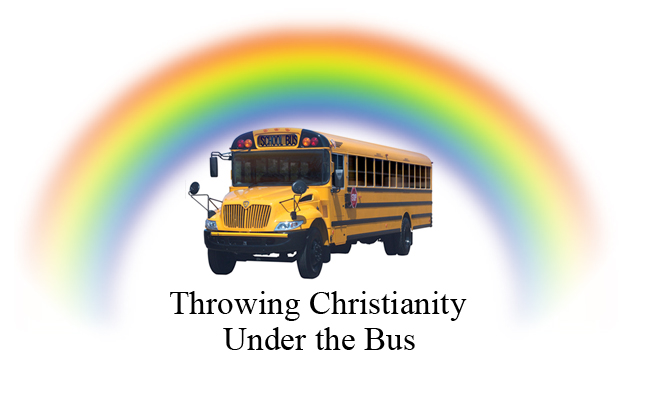 Leonard Ravenhill once said, “If Jesus had preached the same message that ministers preach today, He would never have been crucified.”

This is something to think about as we live in a very proud America defined by three things:

Today in America we have Transgender Kindergarten, enforced cross-dressing in our Army, Transgender Girl(?) Scouts, a lesbian Army general, purposeful , systematic economic bondage through man-made fiat currency, perpetual war in the name of peace, the perpetual surrender of freedom/liberty at home in the name of preserving freedom/liberty, the free (and often happy) surrender of our children to the anti-Christian State for Statist/satanic “education”, a national government that spies on us at a level that would make the KGB or Gestapo weep with envy, and a so-called “Christian” religion that enables and encourages all of it.

But everybody loves Jesus.

Well, nearly everybody anyway, or so they say. Apparently, Leonard Ravenhill was on to something.

While for generations now we’ve been attending churches, reading Bibles, watching Veggie Tales, going to church camps, “getting saved” and laying claim to something we imagine and therefore proclaim to be Christianity, it seems fairly obvious, especially in this late hour, that many of us who dearly adore and regularly attend even the most “conservative Christian” churches in America are not actually down with biblically-defined Christianity. Not at all.

Truth be told, we seem to hate it; we seem to have a visceral disdain for the concept of Christ as King in practice right here and now in every realm of His creation (think: law, politics and economics). We tend to openly recoil at the mere suggestion that His people have been lovingly commanded and equipped to make disciples of the nations, teaching them to obey all that He has commanded, right here and now in every area of live, including law, economics, art, education and everything else. No, that Christianity is something that we were born hating, continue to hate, and have been conditioned to persistently reject at every turn through immersion in things like State-controlled “schools”, Corporate-controlled pop-culture, and, most importantly, professing Christian “churches” who are as opposed to the true life- and culture-changing Gospel-fueled Great Commission as anyone else.

It is these American churches and professing Christians are those most responsible for all of the rest; they are the gatekeepers between the Gospel and the world, and they have chosen to close the gate between the two, keeping the world “safe” from the confrontational, corrective Gospel command and rule of Christ the King. They’ve replaced the Gospel of the Kingdom of God with any number of convenient, marketable, man-centered and inherently popular counterfeits. They aim to give us just enough to “get us saved” and make us feel good about doing…well…pretty much whatever we want to do. I mean, if we’re saved and the Gospel is only about getting us saved, then what’s the big deal, right? Live and let live. Don’t sweat the details. Just go with the flow.

So it is that we have not sweated the details of the true Gospel and gone with the flow of the anti-Christian worldviews that are actively working to shape and dominate the culture in which we live. And we seem to love it even now – this tiny little fake gospel of ours – at least enough to clamp down on those annoying “religious zealots” and the “extreme” perspectives of some who actually, you know, take the Great Commission seriously.

We just love our Candy Christianity, our Toy Box Christianity, our Easy Button Christianity, our Magic Christianity, and our “Gospel in a Bottle” Christianity, each featuring our own personally assembled and diligently customized Mr. Potato Jesus-type toy savior. We love these play gospels and toy Jesuses, and we will defend what we love. So it is that we – the professing Christian church in America – have enabled and often ourselves become the most vigorous persecutors of those who really, truly stand for the Gospel of Jesus Christ.

In loving, promoting and living out our favored counterfeit gospels rather than the Gospel, we’ve thrown biblical Christianity and, by natural extension, true Christians under the bus…a bus that is driven by professing Christians.

They’re the ones sending their kids to the State for anti-Christian “education” and tired of hearing that sort of thing called “sin”.

They’re the ones who love their contrived political theater and look to their favored Pagan Right/Pagan Left political and economic “experts” to save the day here in “the real world”. (See: Confronting the Gay Orwellian Party: Dragging the Pagan Right out of the closet and into the light.)

They’re the ones who want to keep their Mr. Potato Jesus in the safe position of being lord over their hearts, they prayer closets, their church activities, and some future heaven-type place out there somewhere, but never as lord over their approach to politics, business and education right here and now.

They’re the ones who want a “Kingdom of God” that is always out there…separate…safely away from them. (See: Christianity in a Box: Containing the Contagion of Obedience to Christ.)

And they’re willing to run over anyone who gets in the way of that delusion.

Which brings us neatly ’round to one of the major duties of true Christians: Lovingly confronting and correcting the self-serving delusions of the proud and rebellious with the Gospel commands of Christ the King.

Even if doing so gets us thrown under the bus.

Ultimately, every knee will bow, every tongue will confess, and every artistic, political, economic and scientific thought will bow to Him as His Gospel conquers and makes all things new through His obedient people, all by His grace, all for His glory, and all to their eternal benefit.