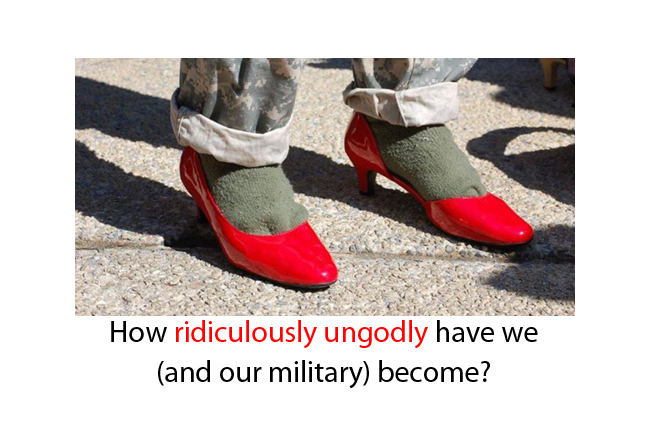 This week we’ve already touched on the gloriously progressive turn that has come to and through American culture by way of “Transgender” approaches to Kindergarten. Last week it was the launch of a “Transgender” Girl(?) Scouts program in Utah(!). Today we’re acknowledging America’s fabulous new high heels wearing crop of U.S. Army cadets.

Now that we’re shifting into the higher half of the gearbox on our proud, happy rocket ride to cultural oblivion, things are getting crazy and weird in ways so bizarre that it’s hard not to laugh before or while weeping at the ridiculousness that is emerging as the new normal in America.

This “new” normal has been brewing and building for a very long time, thanks to generations of progressive abandonment of the Gospel-fueled Great Commission as the basis for life, culture, and civilization. Having long since traded in that Gospel for a weak, watery, self-centered and emotion-driven counterfeit, we’ve swung the door wide open for the “American State as god in practice” worldview that now dominates and defines even most professing “conservative Christian” hearts and minds.

As such, things are going from bad to worse to “you have got to be kidding me!” right before our unbelieving eyes. We are now being “treated” to the tragically comedic consequences of our pride and rebellion as the whole “America Idol” show enters into its climactic convulsions of suicidal idiocy.

Where once a character like M*A*S*H‘s Corporal Klinger was presented as something to laugh at, we are now moving closer and closer to cross-dressing (and all that comes with it) being viewed as legitimate (and eventually normative) within the ranks of the armed forces of the good ol’ U. S. of A. 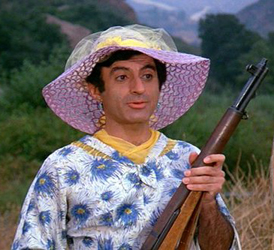 Way to be progressive and proud!

What better way to demonstrate American-style, America-defined freedom and liberty to the world!

After all, we’re free to do whatever we want here (or so we think), including worshipping any god we like. And, as we are seeing with increasing frequency and in increasingly dramatic fashion, once we agreed that American-style freedom included the “right” to worship false gods, we embraced a worldview centered on the notion that the one true (and exclusive) God’s Nature is non-essential. As such, at that point everything else in life became untethered to His Nature as defined in His Word and therefore destined for the disintegration that we are experiencing now. (See: Openly Reject God’s First Commandment? YES! WE! CAN!)

It is in this context that we have come to the point of Army cadets in heels.

“Cadets were threatened that their careers would be finished if they refused to participate in a feminist campaign to promote the completely debunked college rape culture myth by wearing red spray painted high heels.”

This is just the latest in a long and sad line of regression into darkness brought about in the name of modern American-style love, liberty and freedom.

Back in 2012, we were treated to the joyous news of the U.S. Army’s first openly lesbian general. As giddily reported by the New York Times (and a gajillion other progressive tools), this development was presented as yet another fine example of American liberty, freedom, and progress on display. And let’s be clear here: These presentations were (and are) completely consistent with an America that centers itself plainly and proudly on the “freedom” to worship (and therefore) submit to any god or no god at all (effectively – and not accidentally – making the American State into the one true god in practice, since all other gods are optional extras to be regarded as equally submissive to the status of the State).

“The officer, Brig. Gen. Tammy S. Smith, 49, a 26-year veteran of the Army, was promoted in a ceremony at the women’s memorial at Arlington National Cemetery. The star was affixed by Tracey Hepner, who was a co-founder last year of the Military Partners and Families Coalition, which “provides support, resources, education and advocacy for lesbian, gay, bisexual and transgender military partners and their families,” according to its Web site.

The couple married in March 2012 in the District of Columbia.”

How can you possibly be opposed to this?

What are you, heartless or something?

This is where the emotion-driven “argument” always goes, and it now finds very fertile ground prepared by generations of God-dismissing, emotion-driven approaches to everything from children’s education to civil government.

Until and unless the true Church leads this culture in repentance, there will be no turning back. There will be no relief. There will be no salvation from the comically suicidal route proudly embraced by a culture that has from all points on the political spectrum – Left to Right – made the State god. (See: Judgment begins with the Church…not the Democrats.)

Until and unless we repent and take up the Gospel-fueled Great Commission, we will reap our deserved doom and witness increasingly sad and bizarre displays of disintegration all along the way.