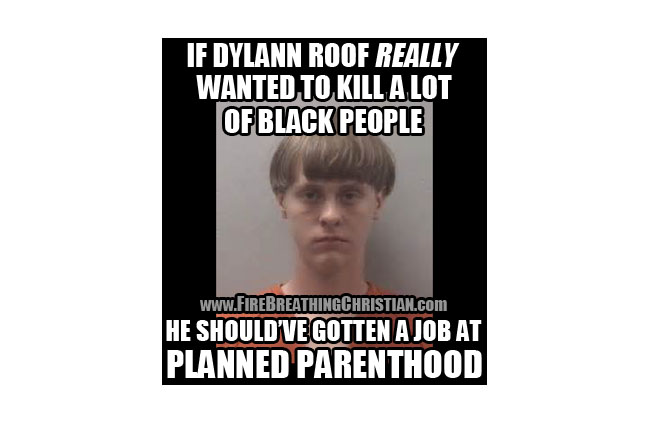 [To better understand this post in context, readers are highly encouraged to consider the accompanying article: Black Lives Matter (Even in the Womb). Thank you.]

Shooter Dylann Roof, perpetrator of the horrific murder of nine at a place of worship in Charleston last night is by all early accounts a thoroughly troubled character with a seething hatred toward black people.

Which then begs the question: Why didn’t he just get a job with Planned Parenthood?

I mean, they murder black people by the millions.

Margaret Sanger, founder of the organization, frequently made it plain that eliminating blacks was a primary motivation for Planned Parenthood’s formation. Here are but a couple of samples of the worldview behind Planned Parenthood in its founder’s own words:

“We should hire three or four colored ministers, preferably with social-service backgrounds, and with engaging personalities.  The most successful educational approach to the Negro is through a religious appeal. We don’t want the word to go out that we want to exterminate the Negro population, and the minister is the man who can straighten out that idea if it ever occurs to any of their more rebellious members.”

“Birth control must lead ultimately to a cleaner race.”

So if Roof had just taken a job with Planned Parenthood, he would have been protected by American “law” and adored by a great many American people as a champion of “freedom” and “liberty” while he went about the business of “exterminating the Negro population” and “cleaning up” the human race. (See: Our Murderous Hypocrisy: How America is “outraged” by ISIS…while strangely comfortable with mass baby butchering at home.)

He could have helped to murder blacks each and every day of his “legally” protected professional life. (See also: 51,000,003 reasons why America owes Nazi Germany an apology.)

But instead, he failed to think things through and killed nine.

Coulda been thousands instead.

Maybe even tens of thousands over the course of a career.

He could have had his hands personally involved in the murder of a mountain of black people.

And he would have been paid for his work.

So while we rightfully mourn the loss of the nine image-bearers of God that this monster did murder, let’s take a moment to reflect upon and pray for God’s judgment upon the unrepentant mass murderers who operate openly all around us today in “the land of the free” and the home of NSA, systematically murdering babies by the tens of millions in the name of protecting American “freedom”, “liberty” and “human rights”.

Click here to continue on to the following (and related) post: Black Lives Matter (Even in the Womb)