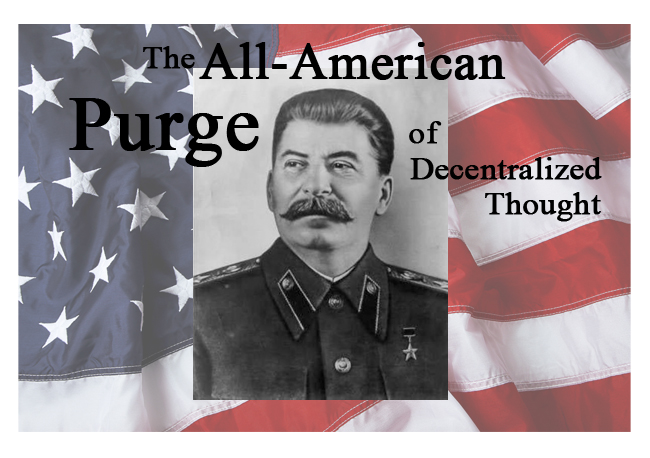 It must be killed, buried, then exhumed, re-killed, cremated and scattered to the wind, never to be even considered again. That’s the hope of the modern American Statist, anyway.

As we allow it to go on, it will continue to consume every threat (real or imagined) to the supremacy of the indivisible American Corporate State.

Yesterday the New York Post even opined that “Gone With the Wind should go the way of the Confederate flag”, and it isn’t gonna get any better from there.

Every icon or work of art even remotely perceived to be associated with radical decentralization of the “indivisible” political power of the American Corporate State will indeed become a target of The Purge.

So as the Stalin-esque weirdness and wackiness rolls on, let’s take a moment to remember and remind ourselves of exactly how deeply buried in the tentacles of centralized Corporate State Power we have become here in America…and why that Corporate State is so determined to nip any seed of dissent in the bud.

Here are three examples of radically centralized power in the “land of the free” and the home of the NSA:

These are but three of the many profoundly powerful realms that we have allowed to be captured for the American Corporate Statists through the application of centralized power.

These are also three great reasons as to why the American Corporate State is doing what it is doing where the profanation of decentralization as a concept is concerned.

The radical decentralization of their power is their ultimate fear.

So don’t let ’em get you down. Don’t let ’em distract or depress you. Keep your eye on the ball and know this: Their pathetic little empire will fall, and much sooner than perhaps even the most optimistic of Christians may believe.

I suspect that many Statists know this to be true deep down inside…which is why they are so desperately afraid and anxious to destroy the seeds of their soon-to-come destruction.