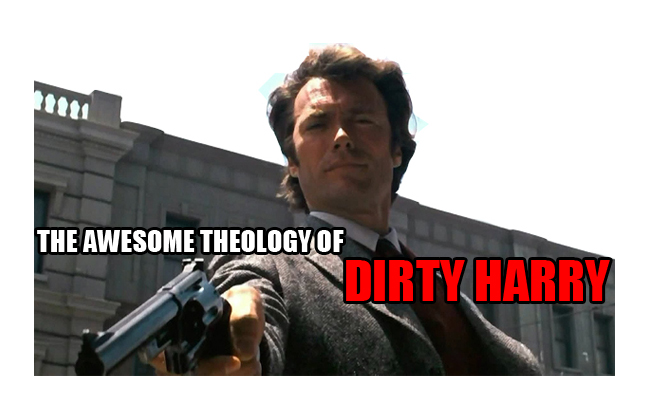 And truer words have never been lost in the fog following a barrage of precisely placed rounds from a .44 Magnum.

But there they stand nonetheless, those powerfully humbling words, haunting and reminding us to this day.

While few may regard “Dirty Harry” Callahan for his deep theological prowess, the good(?) detective here actually serves as a reminder of a handful of profound, unbreakable, and beautiful biblical truths:

So it is that God owns even Dirty Harry and will use him perfectly to convey truth. Often times by way of contrast and freely chosen futile opposition. And at other times through “accidental” affirmation of the beautiful truths of Scripture, like…”A man’s got to know his limitations.”

Okay, so maybe this is more like “the unintentionally (and quite infrequently) awesome theology of Dirty Harry”, but you get the point. And it’s an important point to get.

Art, film, fiction, drama, science, technology, law, politics, guns, ammo and everything else belong to God. They are all His property.

His Nature as lovingly, perfectly, and sufficiently revealed in His Word is the binding reality throughout all of His creation.

His command to repent, believe, and submit to His Son as King in practice is something that must be embraced in order to find any true and lasting goodness in any realm of His creation.

Any time that “We the People” think we have a better way or a more “realistic” approach to anything in God’s creation than that which is lovingly and clearly prescribed in His Word, we are buying into the lie of pride. (See: Note to ‘Merica: There is no “God-given right” to worship false gods. Repent accordingly.)

A man’s got to know his limitations.

So let’s repent and believe accordingly.

Thanks for the reminder, Detective Callahan.