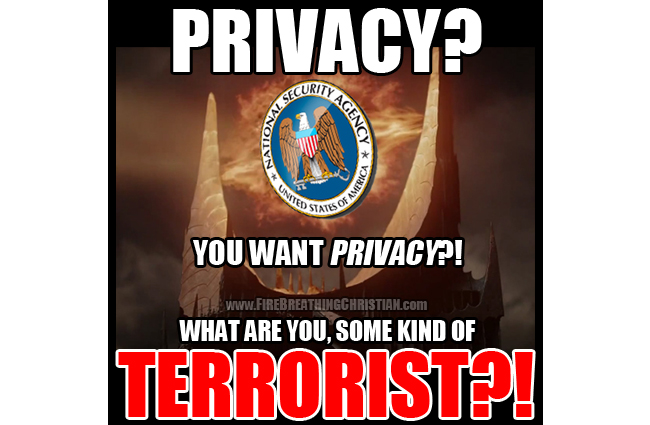 Yeah, it’s those evil terrorists who make use of things like private communications in order to plot, plan, and promote their evil terroristic deeds!

So obviously if we’re gonna deal with terrorists we need to get rid of the terrorist-enabling tool of privacy.

That’s basically the line of State-empowering thought that’s taken off like a rocket since 9/11 and is now about to get a boost into the stratosphere by way of last week’s events in Paris.

In Citing Paris Attack, CIA Director Criticizes Surveillance Reform Efforts, ForeignPolicy.com’s John Hudson noted the CIA’s predictable pouncing upon the opportunity to further eviscerate what’s left of the privacy concept in “the land of the free” and the home of the NSA:

Of course, all of this is “for our own good”:

In his remarks, Brennan said the attacks should serve as a “wake-up call” for those misrepresenting what intelligence services do to protect innocent civilians. He cited “a number of unauthorized disclosures, and a lot of handwringing over the government’s role in the effort to try to uncover these terrorists.”

He added that “policy” and “legal” actions that have since been taken now “make our ability collectively, internationally, to find these terrorists much more challenging.”

Meaning that the backlash and subsequent restrictions proposed against State-spying on American citizens is a “challenge” that our Big Brother keepers simply should not have to deal with. They should be able to go right on spying on us on a scale that would make any past Gestapo or KGP agent weep with envy, thank you very much.

This is what “freedom” now means in “the land of the free”. (See: Are we really free? Do we even want to know?)

And if you think it’s gonna get anything but much worse over time apart from the radical, supernatural intervention of God through His people repenting, rising up, and casting off the chains of American Statism, you are…well…exactly where they want you to be.