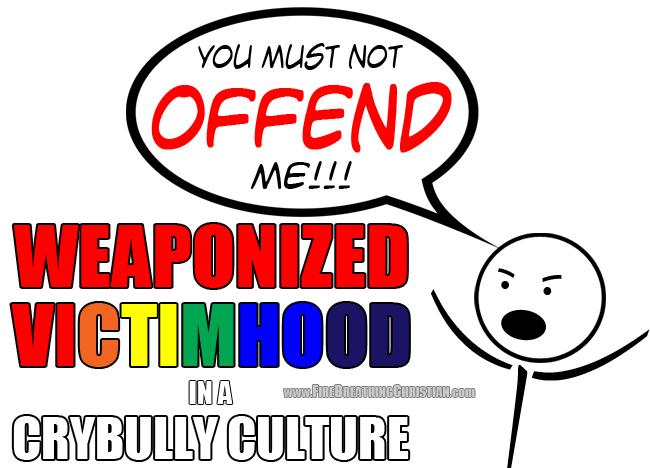 If there’s one thing that oughta be painfully clear by now, it’s that there are some whose precious feelings, emotions and desires are to be diligently treasured and vigorously protected as delicate, fragile little shards of goodness essential to humanity’s progress. These carriers of the Progressive Spirit that is humanity’s one true hope must be shielded, coddled, and accommodated at all costs. And I do mean all costs.

As for those whose feelings, emotions and desires don’t line up with this enlightened, progressive, Precious Snowflake class of humanity, well…let’s talk…

Let’s talk, while we can, about how the self-appointed Forces of Tolerance aren’t really all that keen on tolerating anyone who dares to publicly disagree with them on core worldview issues.

Or the sin of child sacrifice in the name of “freedom”, “liberty”, and the “right to choose” to murder a child for convenience.

Or the sin of State-run children’s “education”, lifted directly from the pages of The Communist Manifesto and the serpent’s tongue in Eden.

And that picture centers on the everything-touching, everything-defining Gospel of Jesus Christ. You know, the most powerfully and purposefully offensive message to ever hit the self-serving, sensitive ears of unrepentant mankind.

Confronting and correcting the world – one person and issue at a time – by the Spirit and grace of God in accordance with His Word and Gospel-fueled Great Commission is something that the Forces of Tolerance in our culture simply cannot tolerate.

So they devise schemes and invent weapons to help them enforce uniformity of unbelief, purge Christ-centered dissent, and place more and more barriers between the public square and the supremely threatening Gospel command to repent of sin and submit to Christ as King in practice. They do this all in the name of love, happiness, peace, and tolerance, of course. (See: Judge not! Unless you agree with me, of course.)

One of the devices currently deployed with great success by the Forces of Tolerance is that of weaponized victimhood.

Through weaponized victimhood, the smiling fascistic Forces of Tolerance claim that the mere acknowledgment of certain concepts or the mere utterance of certain words is so inherently hurtful and painful to their sweet little loving sensibilities that all such concepts and words must be banned and blotted out; they must be disallowed from presentation, much less consideration, in any “good and decent” culture and society.

So forget publicly presenting or exploring the historic human understanding of something like homosexuality as sinful and therefore inherently destructive.

These days in “the land of the free” and the home of the self-described “brave”, we’re often not allowed to even begin to share the long-held Christian view on a subject like that without being shouted down or silenced by whatever means available…again, all in the name of peace, love, and tolerance.

The fact that their feelings are “deeply hurt” is more than enough to justify our being silenced. And punished. And ostracized. And worse. (Much worse, if the Forces of Tolerance ultimately manage to find their way to the highest levels of unrestricted power over the culture.)

The fact that their sensibilities have been “deeply wounded” is more than enough to make the purging of our perspective from public discourse not merely a desirable preference, but an absolute necessity for the betterment and advance of humanity.

This is what happens after generations of immersion in State-run children’s “education” and Corporate-managed pop-culture.

Some recent reminders of this ongoing cultural trainwreck scenario come by way of numerous protest groups forming at various college campuses across the nation.

In the “Bible Belt” heartland of America, for example, we saw the tragi-comedic pouting of students at Mizzou who were upset at the way the Paris shootings on Friday had horned in on their “struggle” against what Breitbart reported as “a poop swastika of unknown provenance and unsubstantiated claims of racially-charged remarks somewhere near Missouri’s campus”:

Campus activists in America showed their true faces during an international tragedy last night: they are the selfish, spoiled children we always knew they were.

Black Lives Matter and Mizzou protesters responded to the murder of scores of people in Paris at the hands of Islamic extremists by complaining about losing the spotlight and saying their “struggles” were being “erased.” Their struggles, remember, consist of a poop swastika of unknown provenance and unsubstantiated claims of racially-charged remarks somewhere near Missouri’s campus.

So debased has the language on American campuses become that these incidents, which many observers believe to be hoaxes, just like previous campus scandals celebrated by progressive media, are being referred to as “terrorism” and a “tragedy” by moronic 20-year-olds who have never been told, “No.”

Now before we go jumping up and down and shouting amen in response to such “moronic 20-year-olds”, we might want to ask a few questions, like:

Who raised them and how did they raise them? (See: Pansy Nation: Young Americans protest and pout to take parents’ Socialism to the next level.)

By what standard were they educated? (See: Statism 101: State-run “education” makes a State-dependent population.)

Why are we surprised that each successive generation of Americans is more liberal, more progressive, and more openly anti-Christian than the last? (See: Why is the beast of Socialism eating our children? Ask your pastor.)

So while I’m all for being appropriately critical of the insanity unfolding around us on college campuses here and there across the fruited plain, it’s very important that we care enough about the situation to pursue a true solution – a solution will only be found through the Gospel-fueled Great Commission of Jesus Christ.

That means we have to lead the way not merely in criticism of the mountain of cultural wreckage smoldering around us, but in personal repentance for our personal roles in making that wreckage happen in the first place.

The collapse of this culture is first and foremost our fault and responsibility as Christians. Culture is the Church’s report card. (See: Judgment begins with the Church…not the Democrats.)

I’d say “I’m sorry if that offends you” if I was sorry that it offended you.

I hope it “offends” and convicts you as it does me, and that God might graciously inspire us to repent and reform accordingly.