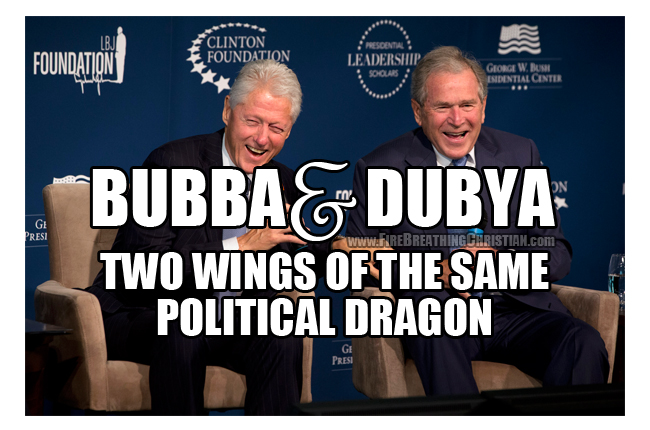 So why do self-described conservatives in America tend to openly (and often quite proudly) favor rank Socialistic/Marxist programs like Social Security and Public Schools? Why do they tend to automatically favor building a larger military and engaging in even more wars when we are, in a word, broke? (See yesterday’s How can a “broke” country have the biggest military in the world?)

Why do most American “conservative Christians” support some of the most insanely irresponsible and wildly unbiblical approaches to economics, civil government, law, and education?

The answer is as simple as it is convicting: American “conservatives” – a camp that includes many professing Christians – has detached the meaning of concepts like “fiscal responsibility”, “the role of the family”, and “the role of the State” from God’s Word. In this, they’ve enabled and promoted the fundamental perversion of their beloved “conservatism” in the same way that those who seek to divorce sexuality from Christ end up destroying the meaning and function of gender, marriage, family, and ultimately sexuality itself.

And how could it not?

So dismissing Him as King in practice and in detail while presuming to deal with things like law, life, and liberty is never a good idea. Such an approach is never going to end well. (See: Presuppositional Law: Where we begin with law determines where we end.)

Over time, idols – even when named “America” or promoted in the name of Ronald Reagan- always lead to the degradation and eventual death of everything that they’re allowed to dominate.

Here in the U.S. the big red glaring signs of our long degradation and now near death culture are flashing and waving all around us…but we barely seem to notice them for what they are.

Instead, when we do allow ourselves to take note of the smoldering wreckage piling up around us, we’re prone (and programmed) to see it not as a sign of God’s judgment upon us or as a sign of our desperate need to repent and submit to Christ as King in practice when it comes to defining and pursuing law, logic, economics, education, and everything else. No, rather than interpret these clear, lovingly provided signs as undeserved warnings from God and a clarion call to repentance, we instead see them as signs that we need to keep doing some version – the “good” version – of the same basic thing that’s brought us to this point.

So we keep playing the same political games, following the same “leaders”, and looking to the same “experts” for salvation…rather than repenting, turning around and submitting to Christ as Lord in political practice.

We keep looking to the State for a top-down solution that might finally come if we just vote for one…more…Republican… (Oh, if only there could be another Ronald Reagan to save us!)

We do this instead of focusing our time, talent, treasure and passion on our lives, homes, families, and churches in accordance with Scripture and the matchlessly transformative power of the Gospel-fueled Great Commission, which supernaturally changes cultures from the bottom up rather than from DC on down. (See also: Cruz Control: How Ted Cruz is positioned to win the GOP nomination…and why Christians shouldn’t pin their hopes on it.)

This is why the power of the State relentlessly grows in America.

This is why true liberty, privacy, and freedom are relentlessly eroded in “the land of the free” and the home of the NSA.

This is why each successive generation of State-“educated” Americans becomes more State-dependent, more biblically illiterate, and more proudly Statist than the last. (See: Statism 101: State-run “education” makes a State-dependent population.)

This all happens year after year and generation after generation as the vast majority of “conservative Christians” pour their time, treasure, and passion into a political system designed by the enemies of Christ for the purpose of making His people slaves. (See: How’s that Pagan “conservatism” workin’ out for ya, Christian?)

I was once firmly and passionately in this camp.

I bought all the lies…then dutifully regurgitated and applied ’em.

I lived, thought, and acted with real zeal within the confines of this artificial (and decidedly unbiblical) political paradigm from the first moment of activism I can remember as a kid (placing a Reagan/Bush bumper sticker on my grandpa’s pickup) to the last time I cast a ballot for a “major party” candidate for President (McCain in 2008).

While thankfully by God’s grace I’ve repented of my personal role in enabling the System of systems that’s led us to where we are now, for most of my life I bought into the contrived and controlled Left/Right paradigm and political puppet show in America while never even stopping to notice, much less consider, that the Pagan Political Right and the Pagan Political Left are two wings of the same dragon.

And that dragon is killing us.

One murdered concept at a time.

Including the concept of “conservatism”.

Let’s stop allowing any label or brand – be it “America” or “conservatism” – to be used by anyone at any time to distract us from embracing the Nature of God as revealed in His Word as the standard by which all things are to be understood, appreciated, and pursued in every realm of His creation. (See: Do we love America enough to call her to repentance? Or are we too proud for that?)

That’s how we can actually lead this culture out of the darkness and into the light.

That’s how we can model the loving obedience necessary to find, sustain, and expand true life, liberty, happiness, and security in this land or any other in God’s creation.

And that’s something that you will never hear pitched as a solution from the Clintons, Bushes, Trumps, Obamas, Limbaughs, CNNs, and Fox Newses of this world.

There’s no such thing.