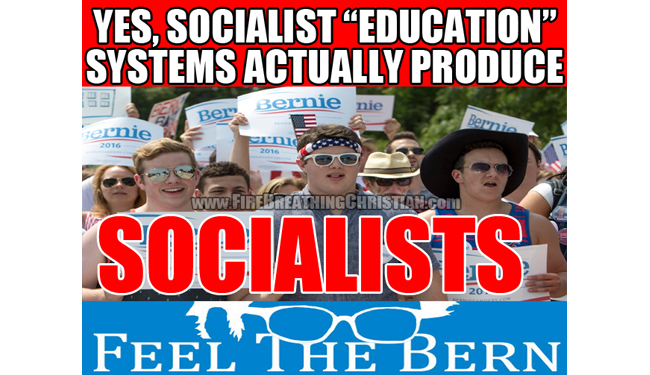 Take, for example, Sanders’ willingness to openly campaign as a Socialist.

This has been seized upon by many as somehow, some way, signaling a significant distinction between Sanders and others operating at the highest levels of US politics. In terms of labeling, such claims are legit. Openly, plainly, and proudly attaching one’s self to the Socialist brand is a big and noteworthy deal. But beyond the label and one’s willingness to associate (or not associate) with a particular brand, it’s vital that we understand that each and every major party candidate for President is, in practice, a stark raving Socialist.

They are all Statists.

They are all Socialists.

They all defend overtly anti-Christian/Socialist/Marxist constructs of State-empowerment and mass enslavement (to the empowered State) like Socialist Security, Medicare, Medicaid and State-run “schools” for children (a concept ripped right out of The Communist Manifesto). In this, all of the Republicans poking and laughing at Sanders’ reveling in the Socialist label reveal themselves even more clearly to be hypocritical liars, and hypocritical liars of a particularly dangerous sort, since these unofficial/informal Socialists then market their refusal to openly attach themselves to the Socialist label or brand as evidence that they are somehow committed to opposing Socialism in practice, while nothing could be further from the truth.

Put another way, one cannot defend or aim to “fix”, “strengthen” or prop up Social Security, Medicare, Medicaid, and/or State-run children’s “education” without being, by definition, a Socialist.

With the Statist/Socialist/Marxist construct of State-run children’s “education” noted, we have a fine transition point into another of the simultaneously tragic and comedic aspects of this episode of As America Circles the Drain, that being the “shock”, “horror” and “disgust” being expressed by countless “conservative Christians” in America over the millions and millions of young Americans who are now all in with Camp Sanders, feeling the Bern and openly advocating for Socialism in the land.

Back in August we chronicled the profound delusion that has come over “conservative Christians” in America who are now so fond of protesting very the fruits that were guaranteed by the path they’ve chosen with each little child they’vefreely  shipped off to the State for explicitly anti-Christian/pro-State mind- and worldview-sculpting:

. . . they continue to feed their children to the beast…all while claiming to “wonder” why the culture seems to be getting worse with each passing day why each generation of Americans seems to inevitably become more inclined towards Secularism, Statism, and Paganism.

How (oh how!) could this possibly be happening in America?

How could State-run “education” possibly produce…more dependence on the State?!

What pride, arrogance and foolishness on display.

What else could we possibly have expected when we freely, happily, and defiantly chose to reject Christ as the essential core of children’s education and replaced Him with the State?

Do we really believe that by denying the label of Socialism while pursuing Socialism in practice we are going to produce anything more than an increasingly Socialist/Statist culture shaped more and more in a Socialist/Statist direction by successive generations of State-“educated” minds who are at least bright enough to see through the label-games being played by professing “conservative Christians” who are no more committed to Christ over the State than they are?

As nutty and confused as these millions of young Socialists may seem, they are often far more coherent and consistent than their professing Christian, professing conservative parents, most of whom are open Socialists and Statists in practice.

Many of these young people understand that their own parents have sold them into a state of bondage to a system built on explicitly unbiblical foundations.

Many of them see plainly that the Social Security Ponzi Scheme that they are to run like a rat on a gerbil wheel to keep going is a sham that will only drain them of life now and deliver nothing to them later.

Many of them understand all too well the fundamental disconnect between the rhetoric of what their “conservative Christian” parents say and the reality of what they do.

So feel the Bern, American “Christians” and “conservatives”.

Your Statist/Socialist chickens are coming home to roost.

Statist/Socialist Republicans cannot save us.

Statist/Socialist Democrats cannot save us.

The only real answer and true solution is repentance and submission to Christ as King in practice in the realms of law, economics, civil government, and everything else.

Only that can save us.

Because only He can save us.

And He will save us…when we repent and believe.

Until by God’s grace that repentance comes, we will continue to Feel The Bern…and the much worse that’s right around the corner.