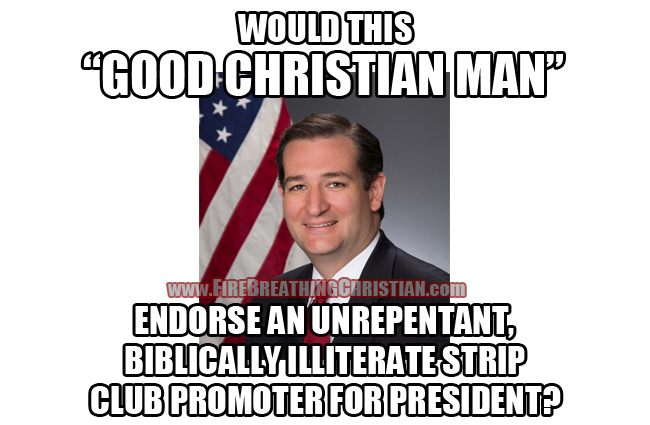 Would Ted Cruz encourage other politically active Christians who “share his values” to support the candidacy of said strip club and casino promoter?

We may soon find out.

With each passing wave of voting in this season’s installment of The Pagan Political Right Wing Puppet Show (now playing alongside The Pagan Political Left Wing Puppet Show over on the Democrat side, as usual), we come another step closer to the delicious/repugnant prospect of a Republican Party National Convention gathered for the purpose of formally nominating Donald Trump for President.

With Trump trouncing all competition – including Ted Cruz – for the coveted evangelical vote in the Republican primaries, American evangelicals have had the “privilege” of playing a major role in crafting this revealingly revolting scenario.

As we noted yesterday in South Carolina Evangelicals Ditch Scripture and Vote Trump:

As I’ve said again and again in previous posts on Senator Cruz: I like the guy. I really do.

But my personally liking the man doesn’t make him a viable candidate for President.

May we earnestly seek the important answers to hard questions such as these. May we repent and reform accordingly.