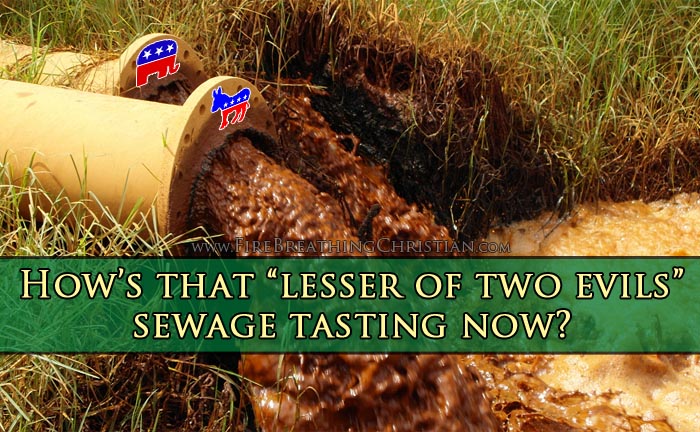 While we may be tempted to feel all dirty, discouraged and downright icky at the prospect of America (led by American evangelicals) choosing Donald Trump and Hillary Clinton as this cycle’s left and right halves of the two-headed dragon that’s dragging what’s left of the culture to hell, it’s important to remember that there is much good that will – and already has begun to – come of this pathetic spectacle.

Though good and proper conviction is a good thing (essential even, since it leads to repentance and restoration), the last thing Christians oughta be known for is fear or depression, since both are the antithesis of faith.

So what good could be coming of Trump v Hillary?

What positives do we have to thankfully embrace through this epically awful clash between The Donald and The Hillary?

Truth be told, there are way too many to list here. But just to help you (and remind myself) not to let the “lesser evil” sewage running on the streets give the impression that “all is lost” or there is no great opportunity to be had, I’d like to share just three:

We are being given the blessing of stark contrast, and I don’t mean between the evils of Hillary and Donald.

I mean between the life and death differences between God’s Word and man’s word on the subject of leadership…and all that flows from it.