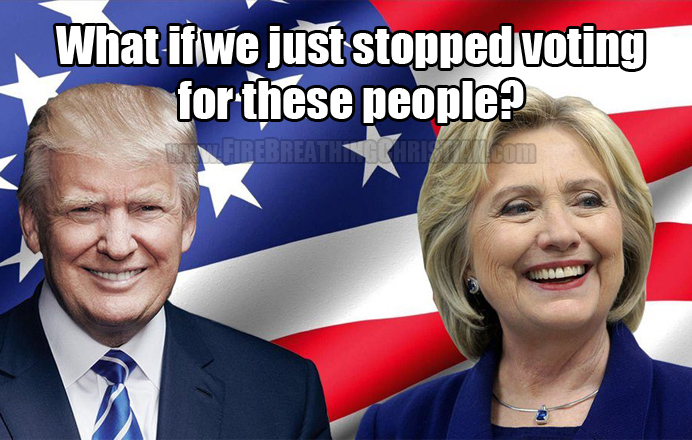 If Batman vs. Superman was bad (and it definitely was), then how should we categorize the ongoing barrage of teaser trailers for Clinton vs. Trump?

How concerned should we be that fellow Christians seem to be once again falling right into the “Must Support The Lesser Evil” line?

How alarmed should we be that American Christians seem to be once again falling for the same old lines and lies that have led them and the rest of the culture so deep into darkness and far into bondage?

And what should we do about it?

For those who are just tuning in now, here are the basics:

What does it mean to the typical American evangelical that Donald Trump openly, proudly, and unrepentantly profits personally (thus helping him to be “a winner”) from the promotion and operation of things like strippers in the strip clubs in the casinos that he owns?

That’s business, you see, and we can’t have our religion get all mixed up in our business.

Which brings us back to Clinton vs. Trump and American Christians vs. God.

As we watch the terrifying Trump/Clinton teasers roll in, we are also being graced by God with excruciating amounts of clarity as to who we are as a people, why our culture is going to Hell on a rocket, and why it’s not about to turn around anytime soon.

As one of many examples provided just this week in Strip club in Harrison enrages residents with sign, the Detroit Free Press reported that:

Miceli’s Corner, an adult entertainment spot in Harrison, located in Clare County, recently updated its street sign to say “Now hiring Class of 2016” with its phone number, encouraging young women from the graduating Class of 2016 to apply.

According to a report from WNEM 5 out of the Tri-Cities area (Saginaw/Bay City/Midland), many residents are asking Miceli’s Corner to change the sign.

“Children fresh out of high school shouldn’t be taking their clothes off for money,” resident Lisa Dickerson told WNEM. “I think it’s sickening.”

But what’s so stunning about a “legal” American business seeking to provide gainful employment to graduating (or not graduating) high school seniors?

What’s so wrong with a “legal” American operation like that seeking to have your daughter or mine take their clothes off and dance in front of degenerates for money?

Isn’t that the American way?

Isn’t that just the sort of thing that We the People proudly claim the “right” to openly participate in?

Early this month in Yes “Christian” Trump supporters, your daughters notice your hypocrisy…and are stripping accordingly, we wrote the following:

Who do we think we are?

These really are stupid questions.

But, then again, we are a stupid people.

What evidence is there of such intense, pride-driven delusion that we may not be long for this world as an identifiable nation state? (Not that that’s necessarily a bad thing – see: The Kingdom of God vs. The (Collapsing) Empire of America.)

Well, for starters, 90+% of American professing Christians voting in November will almost certainly choose either Donald Trump or Hillary Clinton to lead.

And then, if we manage to make it another four years, they will rationalize choosing from between even more overtly evil options than Trump and Clinton as we know them now.

Unless, of course, God moves…

Unless by His grace we actually repent of our America idolatry, stop fearing man, believe the Word of God, submit to Christ as King in practice, and stop actively supporting people who openly aim to lead us away from Him.