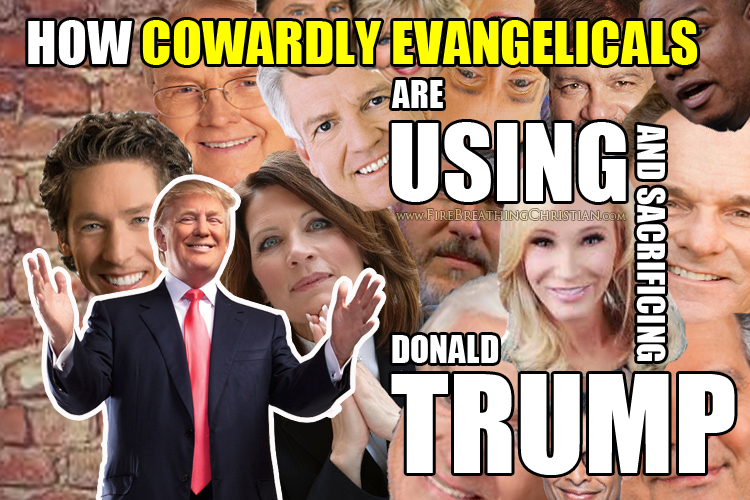 Is Donald Trump playing America’s politically obsessed and thoroughly paganized evangelicals like a bunch of cheap fiddles, just like pretty much every GOP nominee before him?

No doubt about it.

But could it be that these evangelicals – particularly the leaders of American evangelicalism – are actually playing Trump?

Could it be that they are using him?

And again: No surprise there.

It takes two to do these sorts of ridiculous tangos.

But could it be that American evangelical leaders are using Trump in a much more egregious and destructive sense than he is using them?

Sure, Trump is doing what Republican pagans always do: Court (and generally win) the support of professing evangelical voters in America.

Who would expect anything different from Trump?

But what of the professing evangelical leaders now propping him up and defending his laughably indefensible claims to Christ? What of those people?

What of those leaders?

What are we learning now about their priorities?

What are we learning now about what they’re willing to do for their true cause?

What are we learning now about who and what they’re willing to sacrifice for their true cause?

And what are these revelations telling us about the true nature and identity of their cause?

Consider this carefully, Christian: These people are willing to protect Donald Trump from being tested in accordance with the Word of God and confronted with the Gospel command to repent and submit to Christ as King.

Because their primary goal – their true cause – is not the Gospel, and their primary love is neither for Christ nor for the man whom they strive to “protect” from the true Gospel, Donald Trump.

No, their primary goal is power. Political power.

And how pathetic is that?

How much of a betrayal of Christ, the Gospel, and even Donald Trump is that?

To care so much about a presidential campaign that any coherent, biblical presentation of the true, all-encompassing Gospel command to repent, submit, and be saved is…well…just sort of ignored. Set aside. Dismissed.

After all, we have more important things to do.

The man (Trump) is practically screaming for loving confrontation and correction in accordance with the Gospel with every statement he makes, but where are his “preacher firiends”?

Why they’re spinning his rank anti-Christian worldview as something we just have to put up with since he’s “a baby Christian”, as Dr. James Dobson recently explained.

A “baby Christian” who was supposedly “personally led to Christ” by Paula White.

This is how thoroughly Donald Trump is being misled and practically escorted to Hell…by America’s favorite evangelical leaders.

The force of this has hit me hard over the past few days, and I hope that it will hit you, too. The need to pray for Donald Trump has been radically amplified by the eternal threat to his soul posed by the faux-evangelical leaders surrounding, promoting, and protecting him now.

This is what American evangelicalism has become.

May God help us.

Please pray that Mr. Trump will be saved from the evangelical leaders who are willing to sacrifice him along with the rest of us to their true god: political power.

Please pray that someone close to him will share that true Gospel with him, in all of its confrontational glory, no matter the cost to their access or political aspirations.

Please pray that he will repent, believe, and be saved.