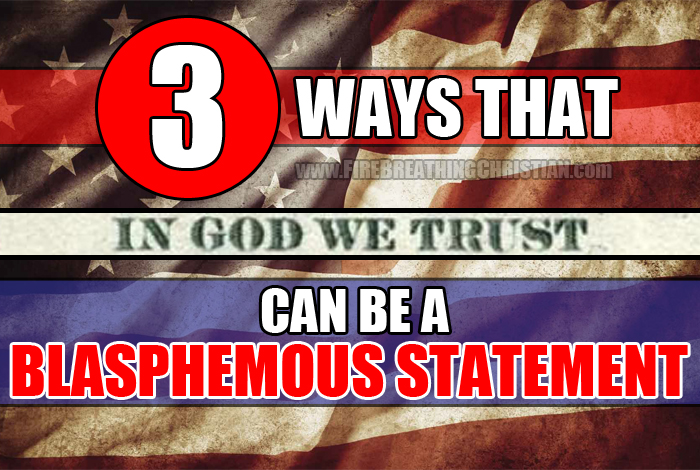 One of the most useful tools the enemy has deployed over (at least) the past 150+ years of American history is conflation.

We’ve been encouraged to conflate America with Christianity, and thereby conflate the American State with God.

That’s how we ended up a land loaded with professing Christians who mostly cherish and defend overtly Marxist/satanic constructs like public schools and Social Security.

This conflation of God with America has played a central role in bringing us to where we are today, which is: Circling the drain, clinging to our pride and refusing to repent even as we circle faster and are now on the verge of going down.

Where the Word of God plainly conflicts with American traditions or American documents or American icons, even most American professing Christians choose American things over Scripture and are far more inclined to shield or defend American icons from biblical testing than they are to welcome it. These days in America, it is very difficult to even find a self-identified conservative Christian who would welcome the testing of the Founding Fathers or the Constitution by the perfect light of the Word of God.

Yet, as Christians, we know (or are supposed to know) that we must test all things in light of the Word of God.

How else can we ultimately know whether a thing is right, true, and good?

To avoid or fear such examination (and the subsequent need for biblical reformation it will reveal) is a sure sign of pride and idolatry.

And if there’s anything “We the people” seem to be all about these days, it’s pride.

Pride fueled by our idolatry of, among other things, America.

Through this pride-fueled idolatry, we have been easily led down a path that has us doing and enabling all manner of lawlessness (as biblically defined) while, at the same time, loudly and proudly citing the name of God or Jesus as we go about doing and championing the very things that He hates.

Our eagerness to attach ourselves to the name of God while openly rebelling against the Word of God has placed us in a particularly dark place; a place far more dangerous and deserving of judgment than the openly unbelieving cultures that don’t even pretend to be Christian by association.

Along these lines, I’d like to offer for your consideration the following three examples of how our often thoughtless use of profoundly important terms like “in God we trust” (or some similar claim to God-centeredness) can, in fact and in practice, become a blasphemous statement on our part:

So why don’t we do it? Why don’t we just read and obey His loving, life-giving Word?

Because we’re Americans who have been conditioned to think a certain way, and that American way is all about an approach to the pursuit of knowledge and happiness lifted straight from the serpent’s tongue in Genesis 3.

We want God to bless us with “good stuff”, but “We the People” want to live life our way on our terms as we see fit.

We want God as our Savior, but we hate the thought of Him as our Lord in any detailed sense of the term.

We want God as a prop.

Not as a lawgiver.

We want God as our enabler.

Not as our ruler.

“In God We Trust”, as we use it in America, has become one of the most loud, proud, and clear proclamations that we do not trust in God.

We do not fear the Lord.

We fear everything and everyone but the Lord.

Few things make that as plan as the way we sprinkle His name around the things He hates and promises to destroy.

May the God we’ve mocked so proudly, so relentlessly, and for so very long grace us with conviction, repentance, and broken submission to His Son as King in practice, rather than delivering us to the judgment and destruction that we so completely deserve.