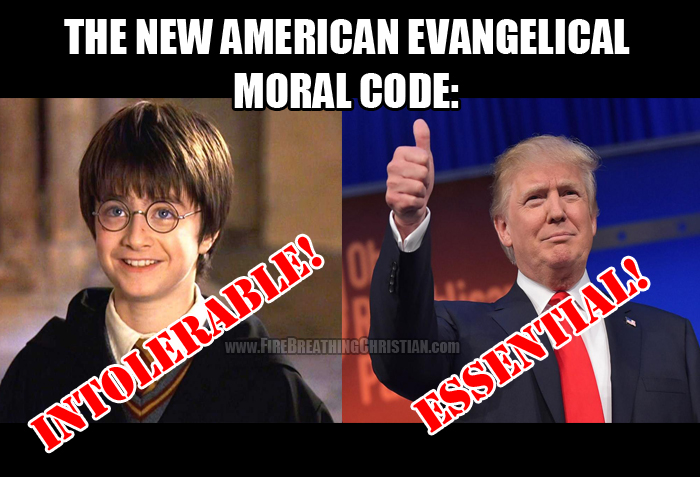 When Politico (Politico!) becomes way more theologically coherent than the majority of politically active professing conservative Christians in America, you know the end is near.

The end of America, I mean, not to be confused with the Kingdom of God, which will advance and conquer everything everywhere whether America makes it or not.

In a recent article appropriately entitled Evangelicals Without Standards, Politico made the following often painfully accurate observations about a politically active professing Christian American subculture that is now completely detached from biblical Christianity:

Davis must be dizzy from the déjà vu.

Davis was a famously stalwart defender of Bill Clinton during the scandals of the 1990s. Little did he know that the excuses and rationalizations made for Clinton then would be repurposed by some of Clinton’s harshest and most moralistic critics for a Republican presidential nominee.

Such are the gymnastics that Donald Trump requires of his most loyal evangelical backers. One day, historians will puzzle over how a man representing the mores of a debased celebrity culture became not just the nominee of the Republican Party, but the candidate of the religious right. After the “Access Hollywood” tape emerged of Trump bragging about an act of attempted adultery and getting away with groping women, representatives of “values voters” jumped most eagerly to his defense. . .

The salt has lost its savor as the price of a place at the table on the Trump Train.

This is Politico(!) noticing this, remember.

The article continued (with bold emphasis added by me):

The leading evangelical defender of Trump is vice presidential nominee Mike Pence, who could sound like he’s delivering a sermon when ordering a cup of coffee. The first step in Pence’s highly principled, faith-based testimonial for Trump was to wait to see how he did in the second presidential debate—in case Trump blew himself up and Pence had to craft a highly principled, faith-based way off the ticket. The second step was to pretend as though a penitent Trump was Henry IV standing barefoot in the snow begging forgiveness.

Pence said it takes a “big”—not to mention, broad-shouldered—man “to know when he is wrong.” As if it were a difficult call whether Trump was wrong to try to seduce a married woman or, as he put it, “move on her like a b****.” According to Pence, “My running mate showed humility, showed what was in his heart to the American people.” Actually, Trump expressed the minimum remorse possible.

When the tape first surfaced last Friday afternoon, Trump’s reaction wasn’t contrite at all. He gave a pro forma “if anyone was offended” apology and slammed Bill Clinton for saying far worse things to him on the golf course. It wasn’t until after midnight that his aides extracted from him a fuller apology in a video, although it included another denunciation of Bill Clinton.

Throughout, Trump gave off a sense of underlying anger at being caught. Bill Clinton sounded exactly the same way in the 1990s when he could no longer deny his affair with Monica Lewinsky. Not surprisingly, Trump was in Clinton’s camp back in the day (their “locker-room talk” together must have indeed been something to behold). Trump said at the time that Clinton’s conduct was no big deal and—true to form—dismissed the women he preyed on as unattractive.

Clinton’s defenders used to wheel out the King David defense, and Trump supporters have used it in recent days. . .

Jerry Falwell Jr., president of Liberty University, likes the King David comparison, which he floated even before the release of the tape. Falwell endorsed Trump in the primaries, apparently on the counterintuitive theory that the man with the lowest character in the field who had the least genuine conviction on social-conservative issues would best serve the interests of the religious right. Falwell’s take on the tape is that its emergence might be a conspiracy of the GOP establishment, which is a little like blaming King David’s scandal on a honey trap set up by the Ammonites.

The other common line of Clinton and Trump defenders is that we are all sinners.

This is, of course, profoundly true. And people do change. But there is zero evidence that Trump has undergone any transformation. Despite all the hours spent with leaders of the religious right, Trump evidently still doesn’t have the slightest inkling that Christians aren’t supposed to be vindictive, dishonest, insulting, bullying, greedy or boastful, among other things.

This is how much of a dark comedy we’ve become: We actually have folks who won’t tolerate a Harry Potter book in their home actively campaigning for Donald Trump to become President. We have people who wouldn’t be caught dead with a beer championing an utterly unrepentant, vice-peddling, casino- and strip club-promoting woman (ab)user to lead their precious and adored America.

‘Cause he’s not Hillary Clinton, that’s why.

Who cares what the Bible has to say about any of this in detail? We can save the Bible studies for later, after we save America!

This is what happens when politically active Christians allow themselves to be driven by the fear of man rather than a fear of the Lord and subsequently ditch any semblance of a coherent biblical worldview in favor of political expediency.

This is what a watching world of anti-Christians (including many at Politico) is seeing modeled by millions of Christ-claiming evangelicals.

There’s something to think about.