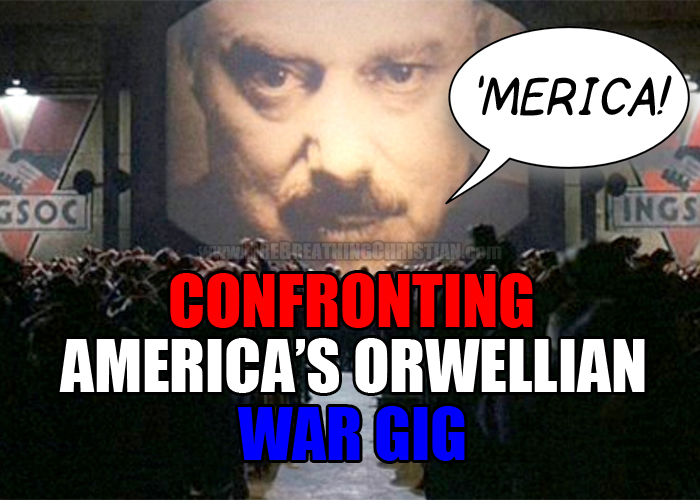 In Orwell’s Nineteen Eighty-Four, the author presents us with a dystopic future in which a Western Super-state pursues perpetual war and public manipulation through, among other things, the use of omnipresent government surveillance.

Once something’s successfully wrapped in or identified with the American flag, we’re supposed to assume it is good. To question it’s goodness is problematic. It’s thoughtcrime.

This is why even for most self-identified “conservative Christians” living in America today, they simply will not allow themselves to critique some of the most cherished (and overtly unbiblical) Marxist/Socialist/Statists constructs in the land, like Social Security and public schools. These “conservative Christians” are, knowingly or not, thoroughly programmed disciples of an anti-Christ State system. Usually the programming is so thorough and deep that they don’t even know it’s there, and will likely become (understandably) offended if and when it’s pointed out.

You just don’t question the inherent superiority and goodness of America.

Especially if you’re a Christian in America.

And you definitely don’t tackle the perpetual war machine, which is another way of describing our massive, globe-spanning, globe-dominating military.

It is this combination of profound, pervasive State-programming of Christians that has led us to where we are now as a people, and it is the intersection of these realities with the currently unfolding “Russian crisis” that is worthy of note as we are, once again, poked and prodded toward hostility with “the evil Russians” (who are actually wanting to wipe out ISIS) while coddling the likes of “our good friend” Turkey.

To get a better sense of the Orwellian insanity of the bilge we’re being peddled where “The Russian Threat” and “The Turkish Friendship” are considered, especially in light of this week’s attack in London, consider the following from an International Scope article entitled Did President Erdogan Threaten Europe Amid London Terror Attack?:

The Turkish President Recep Tayyip Erdogan warned Europeans in a speech given Wednesday in Ankara of the danger they court if the West does not change its behavior towards Turkey. Particularly, Ankara has blasted Europe for barring the government from directly lobbying European Turks to vote “yes” in a referendum taking place next month that would expand the powers of the office of the president.

“If you continue to behave like this, tomorrow in no part of the world, no European, no Westerner will be able to take steps on the street safely and peacefully,” Erdogan said during a speech in Ankara.

The Agence France-Presse (AFP) ran the story, where Erdogan again made comparisons of today’s Europe to Nazi Germany, around 9:00 am. a few hours later, dozens of casualties and at least 4 dead were reported in a terror attack on London’s streets.

Remember: Turkey is our friend.

Now contrast this approach to our “friend” Turkey with the way that the American Corporate State (including it’s wholly owned pawns dominating the Republican and Democrat Party establishments) encourages us to fear, suspect, and practically beg to put a smack down on Russia.

You know, the Russia who is actually aiming to destroy the (oft US-supplied and enabled) bad-guy-puppet-of-the-moment known as ISIS.

We have chronicled this overtly Orwellian “Evil Russians!” perpetual war vibe again and again and again in articles like Just a quick reminder: The American State desperately wants war with Russia., Begging For War (Again): Russian jet shot down by “accomplices of terrorists”., Those Evil Russians Are Doing Military Things Near The Russian Border Again, and Russians Launch Plot to Kill Neo-Con GOP Senators…by way of Syrian Air Strikes.

So the next time you’re tempted to jump at the prompt to beg for war with those “bloodthirsty, dirty Russkies” because they’ve dared to…conduct military maneuvers in or near their borders within sight of our troops parked thousands of miles from ‘Merica, or because they’ve dared to put a serious military smackdown on ISIS in spite of American protestations, please stop to think.

Connect the dots and act accordingly.

We need to stop being tools of Statism through the Corporate-State’s use of patriotism and tradition to suppress dissent and avoid critique (especially biblical critique).

We need to stop fearing and worshiping the American State.

We need to stop being its compliant little enabling slaves.

We need to stop playing its games.

And make no mistake, contrary to the pathetically sub-biblical views of most professing Christians in America, the Great Commission is not a mission of failure. It is a mission of success; guaranteed success secured by Christ.

We need to believe this and act accordingly.

That’s what we need to understand.

That’s where we need to go.

And that’s where we will go, all by God’s grace and all for His glory.

(See also: The Kingdom of God vs. The (Collapsing) Empire of America).