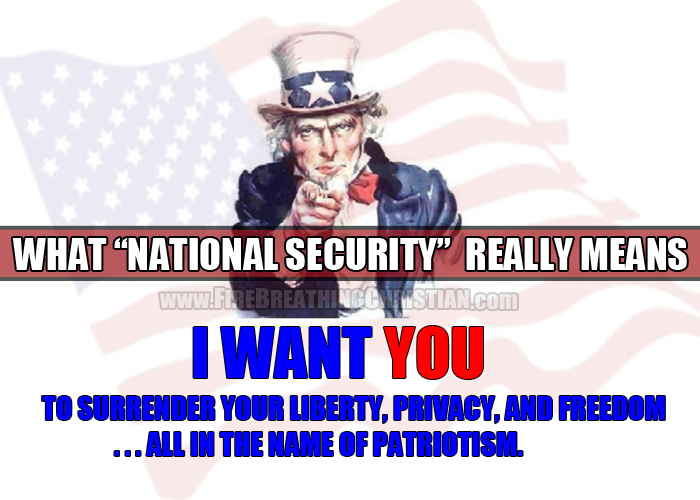 One of the Pavlovian trigger phrases routinely deployed to promote our blind adoration and defense of The Establishment ruling over us is the notion of “national security”.

This phrase and concept – “national security” – has been and continues to be used regularly to consistently nudge us toward accepting and even advocating scores of systems and programs that have been quite literally designed to eviscerate our liberty, obliterate our privacy, and generally make us increasingly dependent slaves of the State above us.

While the term “national security” can refer to the physical defense of our physical land and physical people from a physical threat of some sort, perhaps even a physical army send to physically invade us, what the term “national security” almost always actually means is a defense of the status quo. Specifically the political and economic status quo. More specifically, the thoroughly centralized political and economic systems under which we now labor.

So it is that when someone from the Pagan Political Right or Pagan Political Left talks about “preserving national security”, they mean preserving things like public schools, Social Security, the welfare state, the military industrial complex, and the fiat currency fueled economic construct that keeps all of these State-empowering, individual liberty crushing systems going.

To the political leaders permeating leadership positions atop both major political parties in America, preserving, protecting, and even expanding Marxist/satanic systems like Social Security and public schools is a matter of “national security” since, if said Marxist/Collectivist systems were not in place or a part of American life, the nation that they adore and have built over generations of steady erosion of liberty and growth of State power – a nation State of unquestioned indivisible power, in fact (see: Would the Founding Fathers say the Pledge of Allegiance?) – that nation could not continue to exist.

A Socialist/Marxist nation state that no longer is empowered to “legally” counterfeit wealth out of thin air through the black magic of fiat economics is a nation state that is perhaps only months (or weeks or days) away from utter collapse, since its scores of State-empowering, citizen-enslaving programs and systems simply could not continue if they had to be funded by legitimate means.

These are the realities of “national security” in Socialist/Marxist America.

The sooner we understand this, the better.