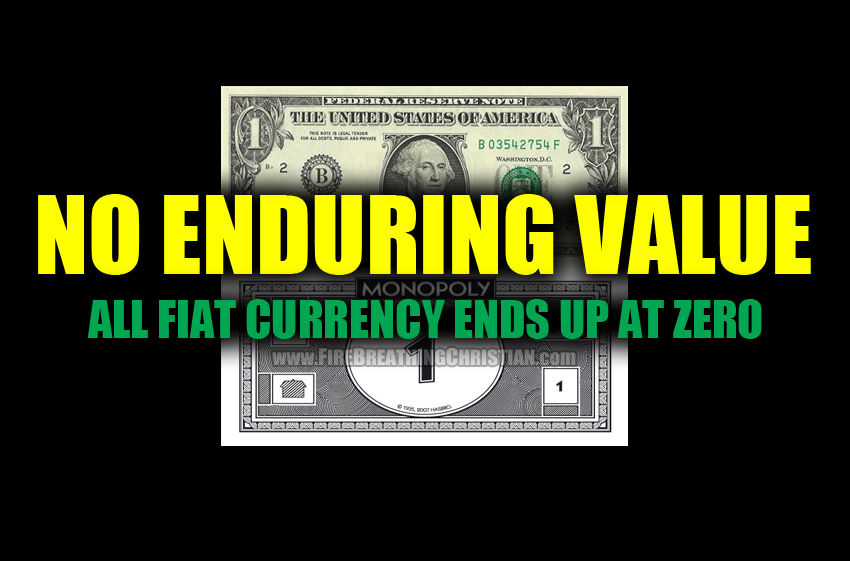 What happens when an entire economic system is built upon an empowered elite’s ability to literally craft wealth out of thin air?

What happens when governments (and their mega-corporation sponsors) are empowered to create infinite indebtedness to fund their ever-growing warfare and welfare state ambitions in the present?

A whole lot of pain, that’s what.

And a whole lot of slavery.

But ultimately the slavery ends.

Ultimately the fake wealth and all the fake prosperity, fake security, fake status and fake happiness it bought is exposed. At the end of the day, the inescapable economic realities defining all of God’s creation will grind to dust every man-made attempt to create wealth (or anything else) out of nothingness.

While black magic economics always ultimately fails, the path to its grave is usually marked by the same telltale indicators, many of which are easy to see sprinkled all over our economy and culture right about now. Artificial asset bubbles (homes, stocks, etc.) inflated and propped up by the Federal Reserve for years are popping and deflating under the weight of reality. Massive unfunded or underfunded pension and benefit programs are becoming more clearly insolvent. Promises made by thieved and liars operating in the political realm for generations are increasingly being exposed as then lies that they’ve always been.

The jig is almost up. The Jenga tower is teetering. Reality is looming on the horizon.

In recent months the chinks in our Dollar façade have appeared in larger sizes and more frequent bursts. Various second-and third-tier world powers are making moves toward “de-dollarization”, threatening the global reserve currency status that allows us to print “money” in ways that no other nation can. Whether we like it or not or are interested in it or not, these developments will profoundly shape the future of our homes, families, businesses and culture.

So we need to pay attention and prepare accordingly, not out of fear or anxiety, but out of thankfulness to God and anticipation of what He’s doing to break the chains of fiat currency.

We have to understand and help others to understand that the US Dollar is a manmade construct without inherent value, designed as a debt-instrument by which an elite few can literally own and control everyone and everything beneath them by virtue of their power to magically (and quite effortlessly) craft “money” out of thin air.

What you and I pay for in time, effort, and creativity, they create out of nothing without any work at all.

That’s what we’re living under…for a little while longer, anyway.

That’s what we’re about to be delivered from.

With every country moving away from Dollar dependence and with every artificially inflated asset bubble’s pop, we are one step closer to the exposure and death of black magic fiat economics.

In the wake of building momentum and increasing news coverage of related developments, I wanted to take a moment to remind and encourage others to prepare as they are able, not out of panic or dread, but out of a place of confidence and hope that only the Author of economics can (and does) provide for His people even in the mist of the sometimes violent storms He uses to accomplish His goals on His earth on behalf of His people.

For more thoughts on the nature of fiat currency, please check out or other articles on the subject, including:

What is the primary goal of business? (Hint: It’s NOT What Rush Limbaugh, CNBC and Forbes Are Telling Us)