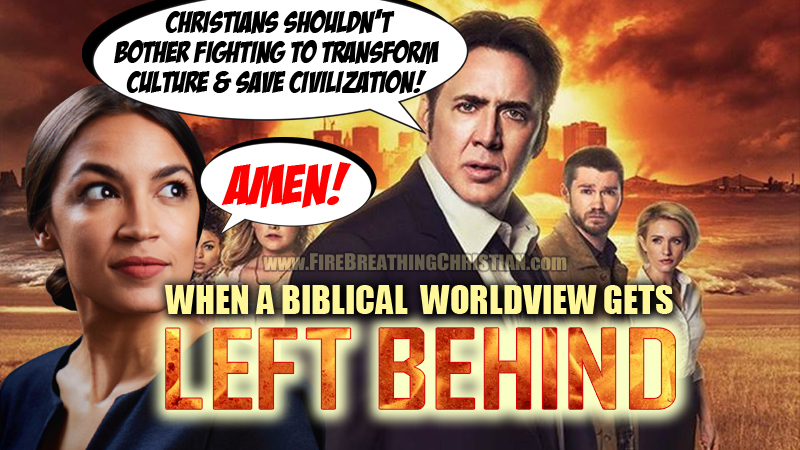 On the way to death it leads its adherents deeper and deeper into bondage and darkness. Kinda like what we have going on in America right about now.

For those new to the term, eschatology is just a big way of saying “future things” or “the future of humanity”. It’s a category of thought dealing with what some like to label “end times” or “future path” stuff. It’s about where we’re ultimately going as people and what the path to that destination looks like.

In a recent ZeroHedge article entitled Young People Are Increasingly Blaming “Climate Change” For Not Saving For Retirement, I was reminded of both the destructive power of bad eschatology and the pessimistic views on culture and civilization shared by most American evangelicals and leftist wackos like Al Gore and Alexandria Ocasio-Cortez (AOC).

The article in question launched with the following:

“An increasing number of younger Americans are blaming climate change for not putting away money for their own retirement.  They say that because the world won’t exist when they retire (because of climate change) there’s no need to save any money.”

If all is lost, why do much of anything beyond the bare bones basics?

Why bother even thinking much about the long haul?

Why bother with multigenerational plans?

Why bother having a large family?

Why sacrifice now to pursue depth and maturity when there’s no future to be deep and mature in?

Put another way: Why take the hard work and everything-touching detail of the Gospel-fueled Great Commission seriously?

Why spend yourself – every bit of yourself – trying to make every area of life and culture more Christ-centered when you can just…settle for minimum effort while waiting for the rapture?

More importantly, do you see the consequences of having such a pessimistic view of culture and its future?

The point/concept that I’d like to focus on in this context is the Great Commission (see: Matthew 28:18-20).

How does the pessimism of Americanized Christians and front line leftists help or hinder the Great Commission?

What does their shared pessimism say about their (shared?) view of the Great Commission?

Let’s explore these questions a bit…

One of the telltale signs of an unbiblical eschatology is an assumption (or even outright proclamation) that the Gospel-fueled Great Commission simply will not work – that it can’t happen here in “the real world”.

For American evangelicals, it’s a little more slippery and convoluted, with claims of love for Jesus schizophrenically accompanied by explicit and/or implicit denials of the power and inevitable success of His Gospel-fueled Great Commission, often manifested in a personal refusal to submit to Christ as King in politics, education, economics, art, and pretty much every other area of life not labeled “church”.

Where the leftist proudly and openly rebels against Christ, most Americanized Christians claim to love Him as Savior while routinely denying Him as Lord, justifying their dismissal of the challenging, work-requiring, everything-transforming Great Commission by claiming that “there’s no point in fighting for culture and civilization” because it’s “going to hell anyway”. Pessimism where culture is concerned is the shared gateway through which both Americanized Christians and anti-Christian leftists are presently escorting our culture to hell.

For the Americanized Christians in question, this path amounts to self-fulfilling bad prophecy. “See,” they say as they abandon the culture to lawlessness through their personal abandonment of the Great Commission, “we told you it was all going to hell anyway!”

I explored these ideas in several articles a few years back, including Our “End Times” Madness: American Pessimillennialism vs. Biblical Optimillennialism and The True Gospel Conquers Everything; The Modern American “Gospel”…Not So Much. You might want to take a moment to read through those if this subject is intriguing to you.

Where leftists and other overt anti-Christians often use the pessimism in question as a lever by which to promote fear and manipulate people, Americanized evangelicals regularly use pessimillennialism to justify laziness, apathy, shallowness, and a general lameness when it comes to the pursuit of depth and maturity.

If all we’re supposed to do as Christians is “get people saved” as the culture goes to hell around us, why would we spend much time, energy, or resources fighting to make art, politics, music, literature, architecture, games, sports, technology, and civil government more Christ-centered? Why bother? And if we do bother at all, we sure shouldn’t bother too much, right? No need to put too much time, evergy, and resources into that stuff since…[*drumroll*]…it’s all going to hell anyway.

What do American Christians tend to believe most about the Great Commission?

That it can’t be done. (For an earlier FBC article elaborating on this sad reality, click here.)

In this, Americanized Christians and Alexandria Ocasio-Cortez are in complete agreement.