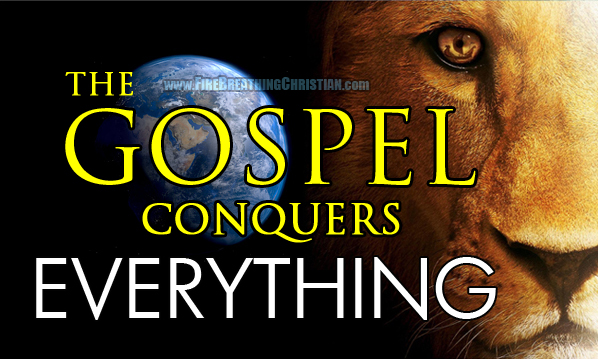 Here’s some good news about the Good News of the Gospel: It’s about much more than your precious personal salvation.

The Gospel of King Jesus touches, purifies and conquers everything.

The Gospel of King Jesus centers on His Kingdom as it has come into the world, invading and conquering all that it touches, all by His grace and for His glory through His people’s faithful application of His Gospel-fueled Great Commission.

Every enemy of Christ will be put under His foot through His people’s faithful application of His Gospel:

That means all art, law, economics, games, technology, literature, science, and everything else will be brought under His rule.

Everything will be brought under His feet.

This includes every nation and every land:

I will tell of the decree:
The LORD said to me, “You are my Son;
today I have begotten you.
Ask of me, and I will make the nations your heritage,
and the ends of the earth your possession.

These are the things of Christ prophesied in the Psalms. These are the beautiful truths of His rule made plain in His mission statement to His people before He ascended to the right hand of the Father, where He now sits empowering and awaiting the completion of His footstool:

So then the Lord Jesus, after he had spoken to them, was taken up into heaven and sat down at the right hand of God.

This is His place now – at the right hand of the Father – where He is waiting for His enemies – all of them – to be made His footstool. Remember always: “Sit at my right hand, until I make your enemies your footstool.” (Psalm 110:1)

This is why we are command to pray that His will be done right here and right now on His earth:

Our Father in heaven,
hallowed be your name.
Your kingdom come,
your will be done,
on earth as it is in heaven. . .”

Which part of His will?

All of it, in accordance with His Great Commission: “Go therefore and make disciples of all nations, baptizing them in the name of the Father and of the Son and of the Holy Spirit, teaching them to obey all that I have commanded you.” (Matthew 28:19-20)

The early church knew and built its everything upon this beautiful, comprehensive truth:

This Jesus God raised up, and of that we all are witnesses. Being therefore exalted at the right hand of God, and having received from the Father the promise of the Holy Spirit, he has poured out this that you yourselves are seeing and hearing. For David did not ascend into the heavens, but he himself says,

The Spirit of God made plain to them, as it does to us now, that the work of the cross – the true Gospel of Jesus Christ the reigning King of creation – touches, defines, and will ultimately reconcile everything to Him:

We destroy arguments and every lofty opinion raised against the knowledge of God, and take every thought captive to obey Christ…

We do these things by the grace of God and His Spirit within us. God is quite literally within His people; He is therefore very much present through His people in this world. His Spirit is the power by which we ultimately accomplish all that He has commanded…in spite of what any of His enemies may do or desire:

Little children, you are from God and have overcome them, for he who is in you is greater than he who is in the world.

When we submit ourselves to Christ and resist the devil, it is he – not we – who will flee the field of battle:

Submit yourselves therefore to God. Resist the devil, and he will flee from you.

So if you’re one of the many (as I once was myself) who looks around and wonders how things could possibly have gotten so terrible so quick ’round here in a place with the deep Christian tradition of America, well…

So it really isn’t any mystery at all as to why we’re where we are now in America and why we’re roaring headlong into even much darker places.
.
While we talk and hear a lot of noise about the “Christian values” of the Pilgrims and other founders of our culture, we will never have the fruits of their worldview while we persist in rejecting (and often vigorously opposing) it. (See also: Our “End Times” Madness: American Pessimillennialism vs. Biblical Optimillennialism.)
.
There will be no return to anything even remotely resembling the (obviously imperfect) “glory days” of America for as long as we reject the biblical worldview of those who God sent before us – people who built their everything upon His Word and strove by His grace to take every thought and every realm of life captive to Him.
.
As long as we cling to the pathetic little “eek people into Heaven and let everything else go to hell” counterfeit gospel that has come to captivate and define much of even our most “conservative, Bible-believing” churches, then we will get only more of what we’ve been getting – and leading the rest of the American culture into – for hundreds of years now. (See: Encouragement from Satan.)
But this period of American “Christian” apathy, laziness, and self-serving cultural disengagement will too pass.
Perhaps America will pass along with it. This seems likely, but we cannot know.
But come what may to America and any other temporary construct that persists in rebellion against the unbreakable Law and Word of God, we have work to do. We have a Kingdom to build. (See also: Roaring into Post-America Christianity.)
.
A Kingdom that has come.
.
A Kingdom that will never perish.
.
A Kingdom that commands repentance and submission to Christ the King in practice.
.
A Kingdom that will conquer everything in God’s creation, all by His grace, all for His glory, and all to the eternal benefit of His people.
.
So let’s get to it!
.
Soli Deo gloria…and let’s roll!