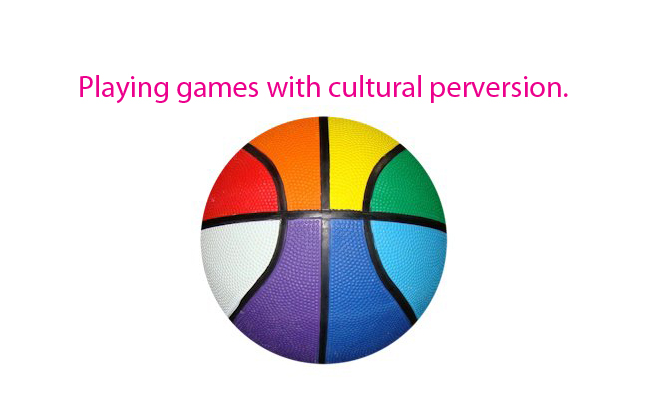 Before we even get started on the latest installment of As The World Turns Gay, let’s start up front by acknowledging the one overarching rule as to how we are all told that we must handle the LGBTQ issue and pretty much any other culturally impactful subject. The Rule of rules is this: Anything but Scripture may be the foundation of our approach.

Our traditions, our opinions, our pragmatism, and most definitely our feelings are in. They’re all allowed and encouraged. Scripture, however, if it even enters the picture at all, is to be kept off to the side, neatly sequestered “in its place”…until it can in due time be eradicated entirely from consideration by the Forces of Tolerance and Progress.

With that Rule of rules understood, on to today’s show…

This week the coaches of the teams that have made it to the Final Four of the NCAA basketball tournament have all signed on to a statement affirming the NCAA’s clear pro-homosexuality, anti-Christian stance. These influential coaches also affirmed the NCAA’s hostile stance toward recently passed legislation in Indiana that would, in the weakest and wateriest of manner in accordance with the American/unbiblical ideal of “religious pluralism”, actually allow a Christian business owner to decline professional participation in something as ludicrous and blasphemous as a “gay wedding”. (For more detail on the nature of the legislation in question, please see: Indiana, Arkansas, and how refusing to stand on the Word of God is killing us. Again.)

Before dwelling too much on this sports themes episode of the ongoing American Corporate/State war against Christ in culture, let’s take a step back and have a look-see at the bigger picture. The bleakness of that picture is getting so clear so quickly that many professing Christians have been left in a state of shock and awe. The most fabulously and flagrantly antagonistic anti-Christians in the land seem to be claiming victory after victory at a Rommel-esque pace. Supposedly “Christian” resistance to this unholy blitzkrieg has been even less impressive than the French Army of ’40.

So what’s a Christian to do?

What’s a Christian parent of small children to do?

Well, as we are told at every opportunity by every organ of the anti-Christian culture around us, there are many, many routes to success and solution, but they all require that we stand on anything but Scripture.

You can’t actually raise your children in accordance with the Word of God! You need “professionals” and “experts” to handle the “education” of your child in State-controlled system, of course. (See: Redeeming Children’s Education: Confronting Our Satanic Approach to the Pursuit of Knowledge.)

You can’t actually govern by the Law of God! How ridiculous! How prejudicial! How intolerant! (See: Will we live by the First Commandment or die by the First Amendment?)

You can’t actually apply the Gospel-fueled Great Commission here in the real world!

You have to be realistic.

Be reasonable. (See: Encouragement from Satan.)

Yes, be realistic, practical, and reasonable…and watch your children and grandchildren finally and fully become the product of a system that we’ve been enabling for generations now through our refusal to stand and build our everything upon the perfect, sufficient Word of God.

If we keep agreeing with everyone who would have us keep our Jesus, our religion, and our Bible “in its place” and rely on the “reasonable”, “practical”, and “realistic” solutions offered by system-appointed, system-serving “experts” and leaders, then it is we who will consign our children and grandchildren to become the pro-perversion, anti-Christian, State-dependent drones that this world is aching for them to become.

As covered earlier this week in Indiana, Arkansas, and how refusing to stand on the Word of God is killing us. Again, until and unless we repent and cling to the Nature of God as lovingly revealed to us for our benefit in His Word, we are (and deserve to be) doomed.

Yes, this means that our ideas and approach to everything – including law, economics, sexuality, and everything else – must be defined and perpetually honed by the lovingly revealed details of Scripture.

That is the answer.

That is the only answer. (See: The Awesome Gospel.)

That is the only place that true life, liberty, joy, and prosperity are to be found in law, economics, education, art, and everything else…including basketball.

Everything belongs to God. Everything.

Anything separated from Him dies and spreads death. Anything. (See: Beware the “Gospel in a Bottle”.)

The all-encompassing Gospel-fueled Great Commission is not an option. It is the only way.