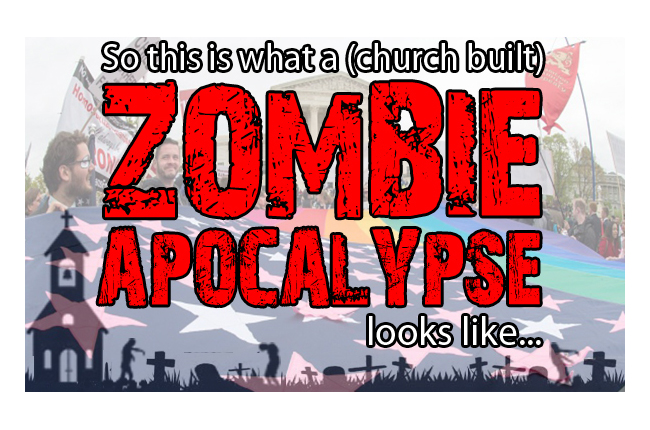 There’s something surreal about what’s happening here in “the land of the free” and the home of the NSA. Something creepy. Something disturbing.

Many are understandably captivated by the looming “Supreme Court” decision as to whether American “law” is going to submit to God’s perfect, unalterable definition of marriage or become further broken by another sad, suicidal attempt to rebel against Truth. But the coming court moment is just one mile marker on a long road that we started down generations ago. It’s a road paved with pride and fueled by the belief that “we the people” are able to define (and perpetually redefine) law, liberty, freedom, justice, family, sexually, gender and life itself. (See: Note to ‘Merica: There is no “God-given right” to worship false gods. Repent accordingly.)

Unwavering belief in our ability to define and redefine reality (in pieces or as a whole) as we see fit is the black heart and cold soul of modern American pride. Whether coming from the Pagan Left or Pagan Right perspective (or anywhere in between), the one thing that Americans tend to blindly believe is that American pride is good and that, by extension, the American State is good.

Those atop the American Corporate State have cultivated this approach to pride and used it to great effect to shape the culture and bring about the big gay zombie apocalypse that seems to be swallowing us up at this very moment.

Around this time of year all across the land we see ever-larger crowds gathered ’round “gay pride” celebratory parades and events. These manifestations of American-style “freedom” and “liberty” have become the new normal even in metro areas located well within “Bible Belt” borders, and they have become more attended and more vigorously supported by average, middle-class Americans.

Each year after the big gay pride wave washes over us, bigger and better attended than the year before, our American calendar the leads to even bigger celebrations of unquestioned pride, with tens of millions of well programmed patriotic people dutifully gathering to pledge allegiance to the indivisible power of the American Corporate State while singing about the “freedom”, “liberty” and “bravery” that they are told defines their lives under the care of said State.

Are these pledging, singing folk bothered much by the fact that the American Corporate State to whom they pledge their allegiance routinely eviscerates their privacy and spies on them on a scale that would make any past agent of the Gestapo or KGB weep with envy? (See: Privacy is for masters. Transparency is for slaves. Welcome to “the land of the free” and the home of the NSA.)

Are they the least little bit concerned about the fact that their economic lives (and therefore their time and energy) are being dictated and controlled by centralized power placed in the hands of bankers who are granted the power to literally create “money” magically out of thin air? Do they even know (or want to know) that this radically unbiblical economic foundation is being used to purposefully direct their lives, making them the practical slaves of those who create dollars out of nothing? (See: Fiat $lavery: We have been bought and paid for…with nothing.)

This is where Christ-less pride and patriotism leads – to a bondage, serfdom and slavery that calls itself “freedom”, “liberty” and “bravery”.

This is zombie culture.