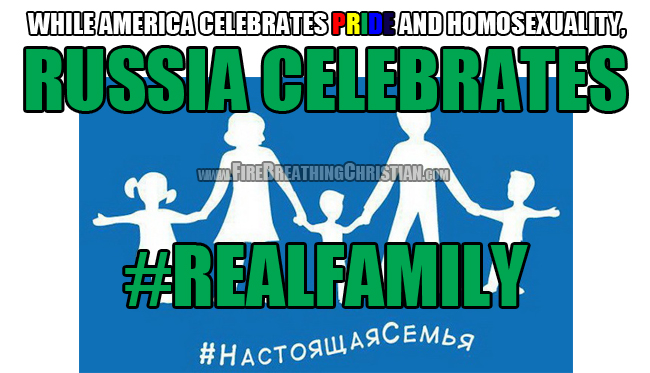 In what must surely be a devious, evil commie plot, the Russkies have shamelessly taken a flagrantly anti-American stand on the definition of family.

More specifically, the malevolent forces of (temporarily undercover) commie-ness have taken a hard line stand both for a biblically coherent definition of family and, even worse, against the legitimacy of the “gay family” paradigm that has become a legally cherished and protected thing here in the “land of the free” and the home of the NSA. (See: “Supreme Court” Votes for Wrath of God Upon America.)

The Moscow branch of Russian political party United Russia unveiled a “heterosexual flag” this week that was designed to counteract the success of the rainbow flag used to celebrate gay rights. The flag shows a man and a woman standing with three children and features the hashtag #НастоящаяСемья, which translates to #RealFamily.

The nerve of those insolent subversive Russians! How dare they!

“This is our response to same-sex marriage, a mockery of the concept of family,” Alexey Lisovenko, deputy head of United Russia’s Moscow branch, explained to pro-Kremlin newspaper Izvestia. “We have to warn about gay fever at home and maintain traditional values.”

See that “pro-Kremlin” part there? That’s s’posed to encourage you to write off and dismiss out of hand anything said or claimed by Mr. Lisovenko. After all, if “Pro-Kremlin Russians” say something, it just can’t be true! Not for Americans, anyway.

And by “not exactly” I mean: Please stop looking at the world through State- and Corporate-designed red, white, and blue glasses.

Test all things (1 Thessalonians 5:21). Including what any Russian or American Statist might have to say. Test all things to see what is true and what is not, and not by standards or traditions or assumptions set forth and encouraged by the States and Statists in question, but by the perfect, sufficient Word of God. It really does have everything covered (see: 2 Timothy 3:16-17)…including the true and unbreakable definition of family and marriage.

Which brings us back to the rightness of Russia and the wrongness of America on this Big Deal of an issue.

One is taking at least some kind of stand for truth, life, liberty, family, and healthy culture

The other is ‘Merica.

Don’t get me wrong here: I am no fan of Russian Statism and its proponents. It’s just that, in this case, Russian Statism is much more sane and far less overtly evil than American Statism.

That is very telling.

May God grace America with broken pride and repentance so that we might throw off the shackles of American Statism and find true life, liberty and happiness in submission to Christ as King in practice…while there is yet time.