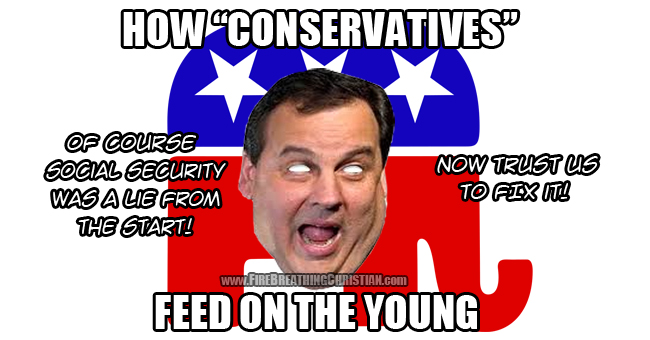 For as long as I’ve been alive and politically aware, Social Security has been known as “the third rail” of American politics, meaning that it is charged, untouchable, and sure to bring death to anyone who tries to grab hold and do something about it.

That third rail is more dangerous and more entrenched than ever, and for reasons rarely acknowledged, much less discussed openly, even in most “conservative Christian” circles.

The handful of times we’ve written about it here, simply calling it what it is (a rank Socialist, State-dependency-fueling Ponzi program pillaging the young to prop up the lies/”promises” made by the thieves who set the whole scam up in the first place), we take a hit. We lose supporters. We get fewer donations. We pay a price.

I’m not asking anyone to break out a little violin and boohoo here for us or anything like that. I only mention this to help shine some light on a very hard and very challenging subject: The Christian perpetuation of increasing economic bondage and State-dependence through Socialist constructs like Social Security and the price that we will pay for even thinking about beginning to seriously tackle this beast biblically. (See: Our “Free Money” Heroin Habit: Why “conservative Christian” Americans sell their own children for just one more hit of Socialism.)

I mention these things because, by God’s grace, “the third rail” got some unexpected and much needed attention at last night’s Republican Debate.

Of all the guys to bring us a serious gem of important and useful info along those lines, I never woulda expected Governor Chris Christie to be that guy. But he was indeed that guy last night.

Oh sure, Ted Cruz had the best night overall and made some nice points about media bias and the general ridiculousness of CNBC.

But rarely – and I mean rarely – will you see a stark raving Statist like Chris Christie cough up some honest, hard and heavy details regarding a deeply entrenched and adored cornerstone of All-American Socialism as he did last night with regard to Socialist Security.

After citing Huckabee’s earlier (and predictable) defense of preserving/strengthening the unworkable, ungodly, future generation raping/enslaving Ponzi program in question, the CNBC moderator asked Christie: “When is it acceptable to break a social compact?”

“Let me be honest with the people who are watching at home. The government has lied to you and they have stolen from you. They told you that your Social security money is in a trust fund. All that’s in that trust fund is a pile of IOU’s for money they spent on something else a long time ago. And they’ve stolen from you because now they now they cannot pay these benefits ’cause Social Security is going to be insolvent in seven to eight years. We’re sitting up here talking about all these other things when 71% of federal spending today is on entitlements and debt service, and that’s with zero percent interest rates.”

He closed with a sweet and significant rhetorical question of his own: If you already know that somebody’s been stealing from you that way, let me ask you: Are you just gonna give them more? Are you just going to keep on enabling the theft?

I am paraphrasing Christie’s question, but you get the point.

And that point is this: Social Security is theft.

Socialist Security was crafted by people to steal from the masses through the coercive power of the State. The money that they stole from folks in the past is now gone.

The thieves took it.

The thieves spent it.

And now the thieves need to keep stealing from masses of people in order to pay “benefits” to those who were stolen from before.

So, as Governor Christie asked, are we now going to keep on feeding the thieves? Are we gonna keep on enabling the theft?

Sadly the answer is, even for most “conservative Christian” Americans: Yes!

Because they are often on the receiving end of the Ponzi scheme’s redistribution program. As for the poor saps on the confiscation end…well…tough luck.

The bottom line is that we all know that Socialist Security is a naked scam being funded now by the pillaging of the working young to cover the “promises” (known as lies) made to the people that they stole from earlier.

Praise God for his use of Chris Christie to remind us of some the truths that we like to pretend we don’t see.

May God grace His people with the active faith necessary to repent of All-American Socialism and trust in Him to perfectly provide all that we need.

May He move His people to demonstrate true love for Him by submitting to His loving commands regarding the roles, responsibilities, and limitations of the Family, Church, and State, so that we might experience true welfare, true peace, true security, true liberty, and true justice for all…as He perfectly defines them.