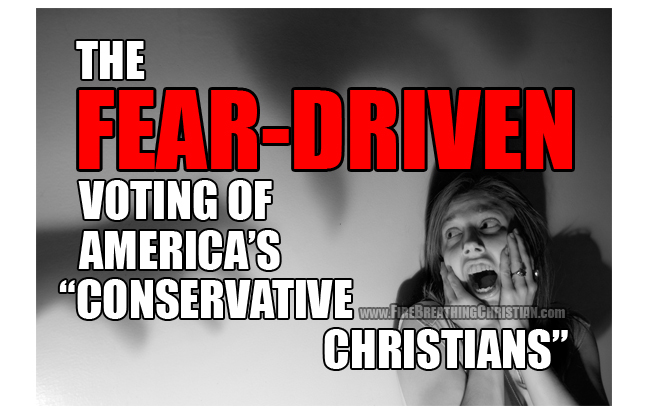 If one thing is plain about the “conservative Christian” portion of America’s electorate, it is that fear is the primary motivator determining how its members spend their energy, resources, and votes. What Scripture refers to as “the fear of man” seems to have completely overtaken a biblically sound “fear of the Lord” as the basis upon which “conservative Christians” conduct business and politics in America.

The fear of the Lord is the beginning of knowledge. (Proverbs 1:7)

The fear of man lays a snare, but whoever trusts in the Lord is safe. (Proverbs 29:25)

While we may be amen-ing, nodding, smiling and such at the sight or mention of these clear and beautiful biblical principles, the sad fact is that the vast majority of amen-ing, nodding, and smiling professing conservative Christians in America seem to openly repudiated the very same principles in political practice at nearly every turn. By surrendering to fear of terrorism, Barack Obama, the gay agenda, or the Evil Democrats as the basis upon which they conduct themselves politically, professing conservative Christians in America have not only modeled an anti-Christian approach to politics for the rest of the American culture to follow, they have also ended up sacrificing and obliterating every “conservative principle” they somehow imagine to be salvageable apart from explicit subjugation to Christ. (See: How’s that Pagan “conservatism” workin’ out for ya, Christian?)

This is why professing conservative Christians – not Democrats – are most responsible for the steady advance of rank Socialism and its attendant cultural rot in America. (See: Judgment begins with the Church…not the Democrats.)

This is how you end up with an American “conservatism” that is all about defending and often expanding clearly Socialist/Marxist constructs like Socialist Security, Medicare, and public schools (which is a concept lifted directly from The Communist Manifesto).

This is how you end up with American “conservative Christians” who dare not stand clearly in opposition to each and every one of these openly Socialist systems of ever-growing State-empowerment over an increasingly State-dependent population.

It’s all about fear.

Fear that biblical approaches to these things just “can’t be done”.

Fear that biblical truths regarding the roles, responsibilities, and limitations of the God-ordained institutions of Family, Church, and State just “can’t be applied” here and now in “the real world”.

Fear that we just can’t let another Democrat in the White House, so we have to support…Donald Trump? Mitt Romney? [insert openly Pagan GOP Statist here]?

We’re all about fear in America.

And pride, of course.

The fear of man that we’ve been conditioned to embrace through State-run “education” and corporate-controlled pop-culture naturally leads us away from “the fear of the Lord” that would actually protect us from the very villains we cower before now and use to justify our rejection of the God who calls us to life- and culture-saving obedience.

Dr. Joel McDurmon of The American Vision touched on the fear-driven/controlled American culture in two recent articles. In Americans’ greatest fear (and greatest failure), McDurmon highlights a beautifully convicting quote from Reformed scholar and minister J. Gresham Machen on the subject of voting one’s biblically grounded Christian conscience in spite of the “fear of man” pitched so relentlessly by the world around us:

“A great many men feel that there is no use in voting against a thing unless you can defeat it. I do not feel that way. I think it is a very important thing to vote exactly in accordance with your conscience, quite irrespective of the immediate success of your vote in your dealing with that measure.”

McDurmon then goes on to connect some important dots:

. . . People know what the problem is, and they know in general what to oppose on principle. When asked in private, they can tell you they oppose it on principle. But when the great machine is running and it looks like standing on principle may be in the minority or unpopular, they fold. They vote for the corrupt government time and again, cajoled by arguments based on unprincipled fears, short-term fears, compromised fears, corrupt fears. They are cajoled by all the things they say they fear the most. They hate socialism with a passion, but they vote for the socialists in both parties and protect socialism in their schools, police forces, health care, retirement, jobs, roads, bridges, agriculture, military, etc.—virtually every place it really matters.

And there we have it.

America is a culture led by its own professing Christians in fear of man and contempt for the Lord.

May God grace His people in America with broken, humble repentance and restoration, so that they might stand, proclaim, and apply His Word as the only life- and culture-saving standard by which we can be saved…while there is yet time…

The fear of man lays a snare,
but whoever trusts in the LORD is safe.