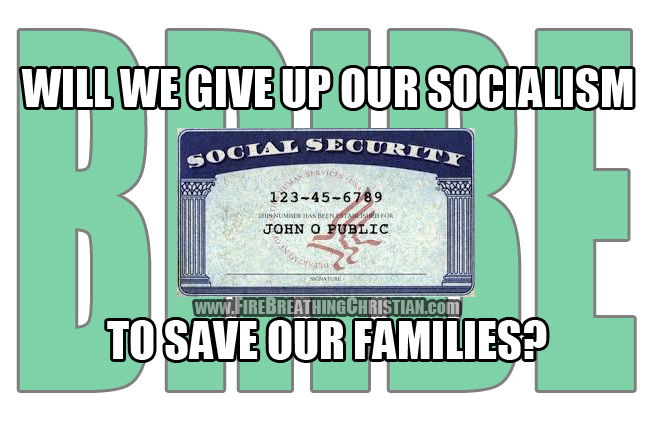 Will we give up our Disability and/or Unemployment and/or Public Schools and/or Food Stamps and/or Medicare and/or Medicaid?

Are we ready to give those things up if that’s what’s required to take a legitimate, winnable stand against the tide of darkness washing over the land?

Are we ready to help others weather the transitional storm that will come if and when they sacrifice those things to take such a stand? (Hello Church and Family – this is your job. You know, the one you abandoned to the State making this whole nightmare scenario possible in the first place.)

Are we as Americans willing to surrender the bonds that keep us under the control of a DC-centralized system that is hell-bent on leading us ever further down a path of “gay marriage”, “legal” child sacrifice, and whatever will come next?

Because make no mistake about it: That is what it will take.

That’s what it will come to.

And that’s why we’ve been led deeper and deeper into the bondage of State dependence by the Pagan Political Right and Pagan Political Left wings of our controlled, contrived puppet show of a political system for many generations now. (See also: What would happen if Christians just said no to American Statism?)

If and when any state or locality gets serious about actively refusing and resisting the evil, lawless “laws” being imposed and enforced from Washington DC, the powers atop the American Socialist State will not hesitate in threatening to yank all of the precious “aid” they’ve made available to “help” us. The All-American happy heroin supply of Socialism will be threatened. And if we don’t shut up and get back in the pro-porn/abortion/”gay marriage” line, then it will be cut off. It will be taken away.

That, my friends, is why there is little, if any, fear in DC of any real, lasting resistance to DC…even from loud and proud “conservative Christians” who are generally as dependent upon Socialism as anyone else in America. (See: How’s that Pagan “conservatism” workin’ out for ya, Christian?)

Ultimately, it is assumed that we will take government payouts over any protracted and potentially very painful stand against the life-, family-, and culture-enslaving religion of Statism. (See: With ObamaCare and “Gay Marriage” upheld, when (if ever) should we simply say no to Federal control?)

So when you ask or hear someone ask a version of the oft-repeated “Why do we keep putting up with this?” or “When will it ever end?”, just remember: The person asking that question is almost certainly dependent – directly or indirectly – upon the continuing flow of Social Security, Unemployment, Disability, Medicare, and/or Medicaid “benefits”. If they themselves are minimally involved, you can be sure that many of their friends, families, and loved ones are almost certainly mired very deep in State dependence. (See also: Kicking the Socialism Habit: Do we love the Lord (and one another) enough to confront and correct our dependence on the State?)

This dependence is paralyzing.

This assumed and accepted reliance upon our DC-based ruling political class to “help” us feed, house, and clothe ourselves is precisely why most of us – including most professing conservative Christians-  are now unable and unwilling to resist.

We’ve been bought and paid for.

Right on schedule and according to plan.

And only the Gospel can change that.

We all have a lot of repenting – and a lot of hard work – to do.

So let’s get to it…all by God’s grace, all for His glory, and all to the benefit of countless generations to come.