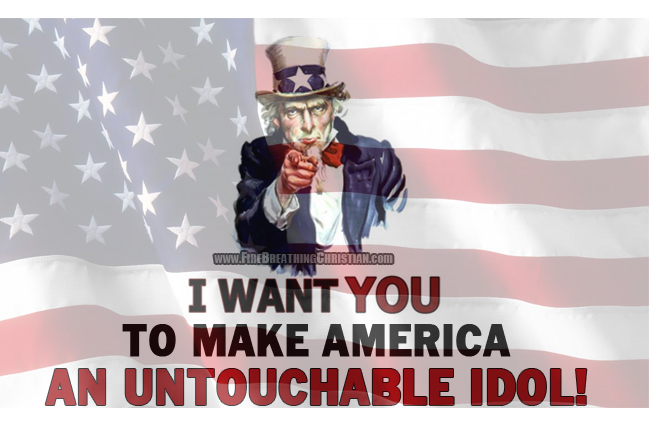 Of the many false religions and anti-Christ worldviews masquerading as Christian in 2016 America, few are as pervasive, impactful and adored as American Statism.

While the name may suggest otherwise, the impact of American Statism is globe-spanning, extending well beyond the borders of the United States. This makes its counterfeit gospel (Statism) and messiah (the American State) all the more dangerous and destructive.

The religion of American Statism has been so successfully taught for so long in “the land of the free” and the home of the NSA, and promoted so aggressively the world over, that most professing Christians in America and many throughout the West have come to conflate America with Christianity.

Back in an early July article entitled Confronting Americult, we tried to tackle this challenging situation in the wake of then-recent Supreme Court decisions that seem to have positioned American culture and civilization on the brink of oblivion:

The one thing to watch for in this or any other culture where death is near and restoration is desperately needed is the one thing that America is in no mood to embrace. That thing is repentance.

Even in the wake of last month’s wave of catastrophically anti-Christian, culture-wrecking edicts from Washington DC, the vast majority of professing “conservative Christian” Americans still took to the streets with their progressive Left brothers and sisters to cheer America on, sing about the awesomeness of America, and generally proclaim by any and all means available the matchless wonder and exceptional greatness of the American State. (See: Are we really free? Do we even want to know?)

After all, who needs repentance when you can have pride instead, right?

And in this prideful, unrepentant approach to dealing with our present situation, the professing Christian church and professing Christians from sea to shining sea have once again chosen to lead the culture further toward death by way of pride rather than leading it away from the darkness by broken repentance and submission to God. (See: Judgment begins with the Church…not the Democrats.)

Where every one of the mountain of relevant biblical reference points should have professing Christians in America in full-blown “sackcloth and ashes” mode, instead we see American Christians leading the culture in blind, unflinching American pride. (See: 13 questions you’re NOT supposed to ask on “Independence Day” in America.)

All while loudly complaining about the state of the culture and looking to their favorite Pagan Political Right “leaders” and “experts” to save the day, of course. (See: Confronting the Gay Orwellian Party: Dragging the Pagan Right out of the closet and into the light.)

And woe unto anyone who dares to point out, much less call to repentance, this Cult of America.

If you speak out against Americult, you are the problem.

So in keeping with our Gospel-fueled mission to be that sort of “problem”, we would like to share here now for your prayerful consideration…The Ten Commandments of American Statism:

I hope that this is helpful, convicting, clarifying and encouraging where appropriate.
.
Repent, America.
.
Or be destroyed.
.
Those are the only two options available, and I share them out of love.