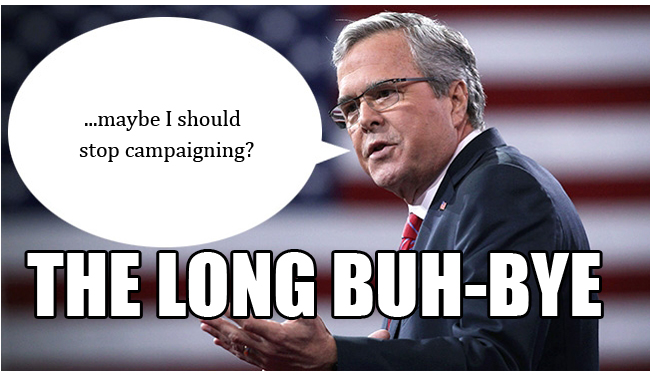 Or 140,258, the number of ballots cast for the top three vote getters in the Iowa Republican Caucus (Cruz, Trump and Rubio).

Or 178,504, the number of ballots cast for the top three vote getters in the New Hampshire Republican Primary (Trump, Kasich and Cruz).

The Weekly Standard recently posted a brief article chronicling the latest sad episode in the slow, forced fade of a persistently clueless Jeb Bush from political relevance. The post (which includes a helpful video link) describes how Jeb recently regaled a (typically) small crowd of supporters with talk of how “It’s all decided, I mean we don’t have to go vote I guess, it’s all finished. I should stop campaigning maybe, huh?”

This may well be the brightest thing Jeb’s had to say so far in 2016. (And perhaps in any other year as well.)

As we noted in Buh-bye, Jeb: Bush gives himself the “warm kiss” of death way back in October:

While Jeb may trudge along a little while longer, fueled by the piles of cash his (increasingly depressed) donor buddies dumped on him over the last year or so, we should take every opportunity to note that the same Statism being pitched by the likes of Bush largely defines the worldviews and campaigns of each and every other candidate for the Republican Party nomination for President.

Jeb may well be a bit more pathetic and sad in certain ways than the more popular political puppets remaining in the contrived race for the GOP nomination, but make no mistake: They are all Statists.

The sooner we all understand that, the better.