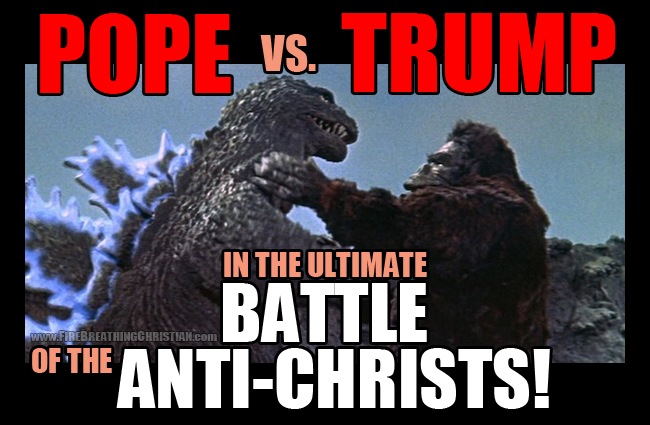 On Thursday, The Pope called The Donald “not a Christian”.

Later on Thursday, The Donald called The Pope’s claim “disgraceful”.

The unstoppable farce of man-made, man-centered religion vs. the immovable, megalomaniacal ego of the ultimate “self-made” casino promoting billionaire.

So yeah, it’s pretty obvious that the wrath of God is pouring out upon America (and much of the rest of the America-led West).

But who ever said that God didn’t have a sense of humor and that it wouldn’t be on display as He “laughs” and “holds us in derision” while grinding us under the heels of His justice, a la Psalm 2?

Which brings us back to Pope vs. Trump.

For those who missed Thursday’s opening night episodes of Battle of the Anti-Christs, things basically kicked off with Socialist/Marxist (and likely Universalist) Pope Francis, who lives in a place with the most restrictive immigration laws in the world and behind fortified walls built to, among other things, help defend against Muslim invasion, calling out Donald Trump for favoring building walls and restricting Muslim immigration.

Not one to take such rank hypocritical idiocy laying down, The Donald responded by pummeling The Pope via public statement, which opened as follows:

“If and when the Vatican is attacked by ISIS, which as everyone knows is ISIS’s ultimate trophy, I can promise you that the Pope would have only wished and prayed that Donald Trump would have been President because this would not have happened. ISIS would have been eradicated unlike what is happening now with our all talk, no action politicians.

The Mexican government and its leadership has made many disparaging remarks about me to the Pope, because they want to continue to rip off the United States, both on trade and at the border, and they understand I am totally wise to them. The Pope only heard one side of the story – he didn’t see the crime, the drug trafficking and the negative economic impact the current policies have on the United States. He doesn’t see how Mexican leadership is outsmarting President Obama and our leadership in every aspect of negotiation.

For a religious leader to question a person’s faith is disgraceful. I am proud to be a Christian . . . “

The Pope, spiritual sith lord over vast swaths of humanity, including a healthy chunk of “We the People” here in the “land of the free” to murder our own children and gawk at strippers working at Trump properties, just got schooled by a biblically illiterate casino promoter who thinks he’s a Christian (and will almost certainly get the vote of millions of professing evangelicals in America).

So is the wrath of God pouring out upon America?

And it is, among other things, hysterical.

May God grace us with repentance and submission to Christ as King in practice before the dark comedy that is America is brought to a close.

May God inspire us to “kiss the Son” while there is yet time, “lest we perish along the way” under the “leadership” of wicked fools like Trump and Francis.