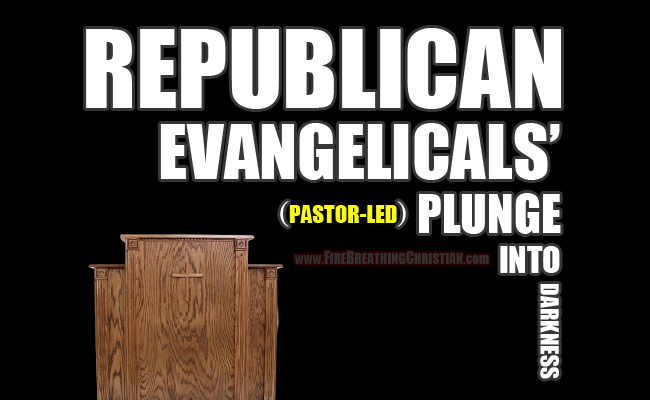 American evangelical leaders have worked very hard for a very long time to get us to where we are now. They’ve done more than anyone else to lead us into the socio-political hellhole in which we find ourselves sinking deeper with each passing Drudge Report refresh, and it’s very important that they get the credit they deserve.

For decades now, these “leaders” have diligently avoided taking every political thought and action captive to Christ as commanded in 2 Corinthians 10:5.

They’ve religiously opposed the Gospel-fueled Great Commission command to model obedience to Christ in every realm of life and lead others to do the same.

Where Christ demands disciples, American evangelicals require only converts…and not true converts to Christ, which would inherently produce disciples, but rather converts to American Evangelicalism.

No wonder The Donald likes “the evangelicals” so much.

They’ve paved the way for him and whatever comes next.

A particularly ugly display of American evangelical “leadership” twisting haplessly and cluelessly in the wind came as Max Lucado decided to “speak up for decency” in politics after Donald Trump so effortlessly captured the hearts (and votes) of truckloads of professing evangelicals, many of whom are led and spiritually fed by the likes of Lucado.

To watch this guy offer little more than nervous laughter in response to the most important questions asked on the subject says it all.  This man is clueless as to his “little gospel’s” role in plunging the culture into darkness…which is precisely why those who rely on him for leadership and instruction tend to be clueless, too.

Here in America we are several generations into a mass discipleship program run by smiling, warm, articulate, charismatic “pastors”, “priests” and such who are pitching a paper-thin, supper-shallow, neatly sequestered phony little gospel that basically says “get saved and be nice”, with “saved” and “nice” defined by the world instead of the Word.

The final façade of decency has now fallen, and Evangelical titans are startled. Leaders like Max Lucado have now taken the unheard-of step of writing about political candidates in the public square. And after all these decades of silence on politics, government, and politicians, what was the final straw that moved Lucado? His title tells all: “Trump doesn’t pass the decency test.”

Decency. That is all. Any candidate can hold any position on any issue and Lucado stays silent. But let a candidate call someone a “bimbo,” and the Lucados of the world speak out.

That’s sad enough, but the ultimate commentary on Lucado’s article is one of utter shame. He literally says that the policies are of secondary concern, if at all: “Could concerns be raised about other Christian candidates? Absolutely. But the concern of this article is not policy but tone and decorum.”

Folks, this is the confession of the great evangelical capitulation in this nation. The most murderous and thieving policies will pass silently under the radar as long as the candidate smiles and shows some restraint of tongue. And this is no hypothetical. This is what has happened. This is what the American pulpit has produced in the American public square.

When Evangelical leaders criticize Trump’s moral failures, they are doing nothing but confessing their own worse failure. They’ve had the chance to build decorum and tone on substance for a hundred years now, and have refused. Now the crumbling foundations are bringing down the edifice of decorum along with them, and the Evangelicals are exposed to the elements.

And you should, too.

American evangelical pastors got us here, and apart from their personally leading the way by modeling repentance and reformation, they will only take us deeper into the darkness, whether they mean to or not.

All with a smile, a warm handshake, and the occasional burst of nervous, clueless laughter, of course.

Donald Trump’s brand of Christianity is the natural product of Max Lucado’s, and until we deal honestly with that hard truth, it’ll only get worse from here.

May God grace His people with broken humility (as opposed to American pride) so that we might finally repent, believe, and be saved through loving obedience to Christ as Lord over every realm of life in practice in accordance with His Gospel-fueled, life- and culture-restoring Great Commission.