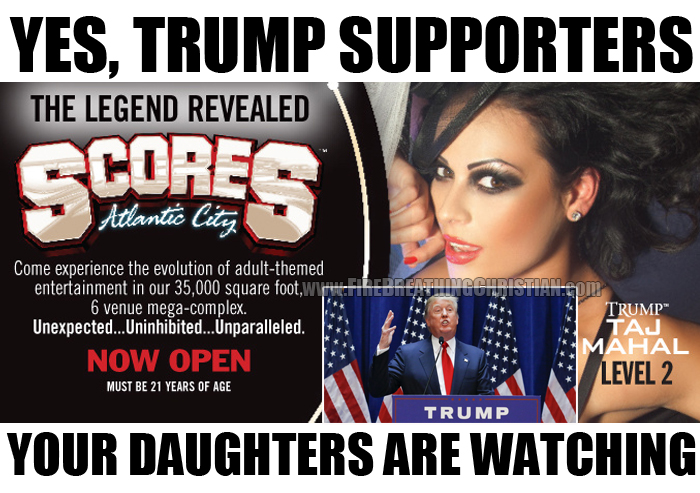 The sad and destructively hypocritical nature of millions of professing Christians who have just swept Donald Trump to the GOP nomination seems important for us to consider, particularly in light of a CBS story posted yesterday entitled Nude Photos Of Nearly 50 Duxbury High Teens Found Online, which reads in part:

Investigators say photos of up to 50 Duxbury High School girls in “varying degrees of undress” were found in a Dropbox page, which has been shut down.

Authorities say there is no indication that any of the students had photos taken of them in an unsuspecting way. Police say some photos are real, while others appear to be fake.

Duxbury Police Chief Matthew Clancy says many of the photos appear to be selfies.

. . . “We would hope that our young girls understand that there are other ways to be popular,” said Duxbury Schools Superintendent Dr. Ben Tantillo during the conference.

Tantillo added, “We want our kids to be safe, (and) we want our boys to know that this is not an appropriate way to treat women.”

So let’s see here, Donald Trump makes a life-long pursuit of infidelity, proudly writes about his extra-marital experiences in his best-selling books (which are then cited as yet another example of his awesomeness), regularly trades in wives, owns and profits from casinos and strip clubs like Scores at the Trump Taj Mahal, and yet his “Christian” supporters expect their daughters to somehow not notice what The Donald might call an “absolutely amazing” level of hypocrisy?

Talk about the judgment of God upon a proud, unrepentant people…talk about God giving people over to themselves a la Romans 1…

Do we really think our daughters don’t notice that we don’t really care all that much about character?

Do we really think our daughters don’t notice that we don’t really care about women’s value and dignity?

Do we really think our daughters don’t notice that our Christianity is a farce?