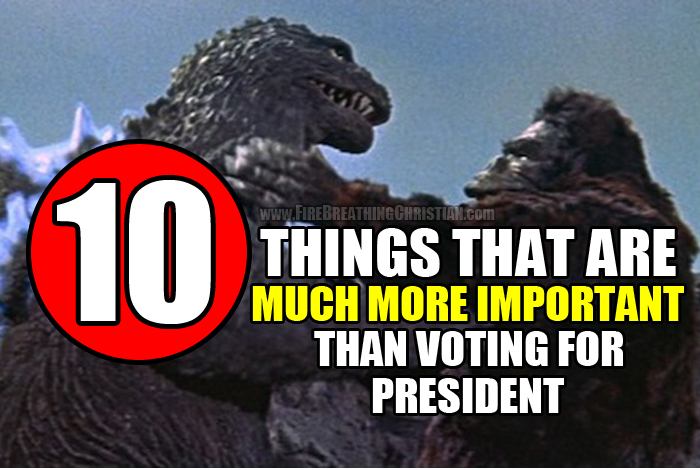 As we collectively lurch like a zombie toward the coronation of either Hillary Clinton or Donald Trump as this cycle’s system-selected counterfeit savior, people are losing their minds.

They’re just going nuts out there.

Which is just the way they like it; with “they” being those who are all about the business of keeping us distracted from a life- and culture-enriching fear of the Lord so that we might be manipulated, controlled, and enslaved through our perpetual fear of everything and everyone but the Lord.

It’s all about distraction.

It’s all about our own enabling of our own slavery through our own willingness (and often eagerness) to be distracted.

One of the greatest purposes of The Great American Political Puppet Show is distraction.

Arguably the single most significant consequence of our tragi-comedic obsession with national-level politics is the way that we happily divert our passion, focus, time, treasure, and energy away from the many things that we can actually do right here and now to radically improve things. Rather than pursuing the many impactful activities readily available to us in the realms of children’s education, economics, law, and civil government – each of which is clearly and lovingly prescribed in those Bibles that evangelicals like to thump and talk about all the time (but apparently don’t actually read much) is all that we need to know in order to actually build something breathtakingly beautiful out of the smoldering, rotting wreckage that is our present American culture.

But that would be hard.

That would take effort.

And, worst of all, it would involve repentance and rejection of the numerous red, white, and blue idols that we’re still clinging to with so much pride.

This is why cycle after cycle, decade after decade, and generation after generation we are so easily steered to pour our passion, energy, time, and treasure into “making America great” by pinning our hopes for the future of culture and civilization to one thoroughly anti-Christ presidential candidate or another.

And generation after generation, while this real-life nightmare scenario rolls on like clockwork, we go right on supporting, defending, and feeding ourselves, our fortunes, our attention and even our little children into the System of systems rather than actually opening our Bibles, seeing what God has said about things like children’s education, economics, law, and the role of civil government, and obeying what He has commanded.

Instead, year after year we dive deeper and deeper into the Political Puppet Show (doubly so in Presidential election cycle years) and year after year we are distracted from doing the very things that God has clearly and lovingly told us and equipped us to do if we really, truly want to see legitimate, lasting peace, security, prosperity and hope in the land.

So here we are again, in 2016 America, with most politically active self-identified conservative Christians still being manipulated (and trying to manipulate others) through fear of everything and anyone but the Lord, pursuing and promoting the many terminal distractions of the enemy while neglecting the very things that God has placed within our reach to actually turn our lives, families, churches and culture around.

In this context, it seems like a good time to share some things that we should be doing that are much, much, much more important and impactful than voting for President – things that if left undone (as they have been left undone by most professing Christians in the land for generations now) will only help to secure the death of American culture that now seems so imminent and obvious, regardless of which anti-Christ is elected President this time around.

Before we get to the list, a couple of important clarifications…

First off, I am in no way advocating that people not vote for President. I plan on voting for President myself in November and have narrowed my choices down to two men, neither of whom are named Trump or Clinton. I hope to write more about this very soon.

But the point here isn’t to direct anyone towards the presidency or the United States on a federal/national level as the source of any real hope. The point here is to direct us all toward the things we can actually do to make a positive change with the time, treasure, passion, energy, and opportunities that God has given us in the places that God has put us.

In order to even see these things, much less pursue them these days, it seems necessary to first force ourselves to look away from the presidential race.

Look away from the White House.

Look away from Donald Trump and Hillary Clinton.

Look away from the American flag.

Look away from the bug zapper that’s killing us again, and start looking toward the life- and culture-restoring Word of God.

That’s the big idea here, however poorly I may express it.

Additionally, it should be noted that this is not anything close to a comprehensive list. There are far more than ten things that are much more important, valuable, and impactful than voting for President of the United States. This list is also not necessarily presented in any order of importance. It’s just ten things that seem to me to be significantly more important than voting for President, that’s all.

With that said, let’s get to it…

10 Things That Are Much More Important Than Voting For President:

That’s how the Kingdom of God advances.

And that’s what we’ve been called and equipped to do right here and now.

The faithfulness of God’s people is all that’s required.

So don’t be distracted.

God has His people exactly where He wants them, and victory has already been secured.