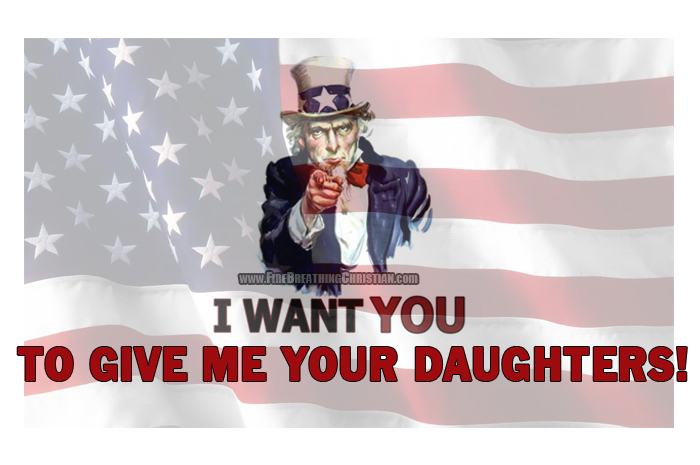 What is the price of Statism?

What is the cost of worshiping the America Idol?

What is the final result of allowing the American State to be treated as God in practice?

With each passing day, we’re discovering the answer to these questions here in “the land of the free” and the home of the NSA.

Early this year in an article entitled American State seeks to extend unbiblical draft registration to women, we chronicled some of the fear-based manipulations that are used to keep us in line with a Big Government Orwellian Nanny State that is becoming more and more blatantly anti-Christian by the minute:

“You know all those wars we keep launching here, there, and everywhere, often times pitched as a part of our effort to stop things like the evils of ISIS, who has been known to butcher thousands in cold blood…while at the very same time we protect the open operation of mass baby butchering facilities “legally” allowed here in “the land of the free” and the home of the self-described “brave”, where we murder on a far more massive scale than anything ISIS has managed?

“Two senior military leaders said Tuesday that women should be required to register for the draft now that the Pentagon had opened all combat roles to them.

Although the move would be largely symbolic — the draft has not been used since the Vietnam War — it would represent another step in the military’s shift toward viewing men and women as equals.”

Then, last summer, we added the following in Biblical Freedom vs. State Compulsion in Military Service (Or: Why the draft is evil.):

Does the state own you or do you own you?

According to most American Christians, particularly those of a self-identified conservative bent, if you are an able bodied male within a certain age range (which is always adjustable, of course), the American State owns you. If you are an able-bodied male within certain parameters (which are always adjustable, of course), the American state has the “right” to take possession of you as its property to use you as it sees fit in its various military adventures, compelling you to serve in its ginormous, globe-spanning military featuring a lesbian general and a new navy vessel proudly named after a gay rapist.

We think we’re free, we sing about our freedom, we take pledges to the Almighty, Indivisible State that “protects” our freedoms, and we gat all uppity with anyone who says anything about how we’re not really very free at all and are getting less free by the second.

We can’t even own a home in America.

And now, thanks to things like the draft (for men and soon women, too), we don’t even own ourselves.”

In this context we thought it worth considering an article posted last week at ZeroHedge entitled Obama Supports Forcing Women To Register For Military Draft, which included some important reminders along these lines:

“Continuing the debate over a massive expansion of the Selective Service, the White House today announced that President Obama is in favor of expanding registration for the military draft to include all women when they turn 18.

“As old barriers for military service are being removed, the administration supports — as a logical next step — women registering for the Selective Service,” said Ned Price, a spokesman for Obama’s National Security Council.”

The White House had previously expressed neutrality on the controversy, but took a position in a statement to USA TODAY on Thursday.

“Under current law, women can volunteer to serve in the military but aren’t required to register for the draft. All adult men must register within 30 days of their 18th birthday.

In other words, as we’ve already covered, the American State claims physical ownership of men.

And we’ve gone along with that for a while now, so it’s only natural that the same State would now be coming for women…all in the name of good ol’ All- American freedom, liberty and equality, of course.

The announcement comes ahead of a planned House vote on a bill to study the expansion of the military draft, or to potentially eliminate the Selective Service outright. The White House has repeatedly insisted they have no plans to bring the draft back, but want to force everyone to register anyhow to “foster a sense of public service.”

The measure had roiled social conservatives, who decried it as another step toward the blurring of gender lines akin to allowing transgender people to use public lavatories and locker rooms. Rep. Pete Sessions, R-Texas, spoke for a number of Republicans when he described the provision as “coercing America’s daughters” into draft registration.

“Conservatives” are funny things. Apparently, these days in America, they’re totally cool with State ownership of males. Oh yeah, that’s just fine. What better way to defend the freedom and liberty of The State than by establishing literal physical ownership of individual men by the collective State.

But such literal ownership of women is wrong?

There’s no solid, sustainable basis in logic to promote the slavery of some without at the very least implying the potential slavery of all, especially when The State is allowed to define, re-define, and re-re-redefine terms (and law) at will.

The ZeroHedge piece went on to close with the following:

But proponents of including women in the draft pool viewed the requirement as a sensible step toward gender equality. They pointed to the Pentagon’s decision last year to open all front-line combat jobs to women as removing any justification for gender restrictions on registration.”

The administration opened all combat roles to women, and officials say they believe expanding the registration system is a “logical next step,” ensuring “gender equality” in forcing the public to register for potential conscription in future wars.

Though there is some call from some in Congress to do away with the Selective Service system entirely as an unused relic of the past, there appears to be considerable support for keeping it in place despite its practical uselessness, simply on the grounds that it doesn’t cost that much.

The Selective Service system was eliminated by President Ford in 1975, two years after the last conscription lottery. President Carter brought the system back in 1980 as part of a show of hostility toward the Soviet Union over the invasion of Afghanistan. The system has remained in place ever since, even though the Soviet occupation ended, the Soviet Union fell, and the US has been occupying Afghanistan themselves for the last 15 years.“

In its exaltation of the State to the position of God in practice, it always brings bondage, slavery, and death.

American Statism is no exception.