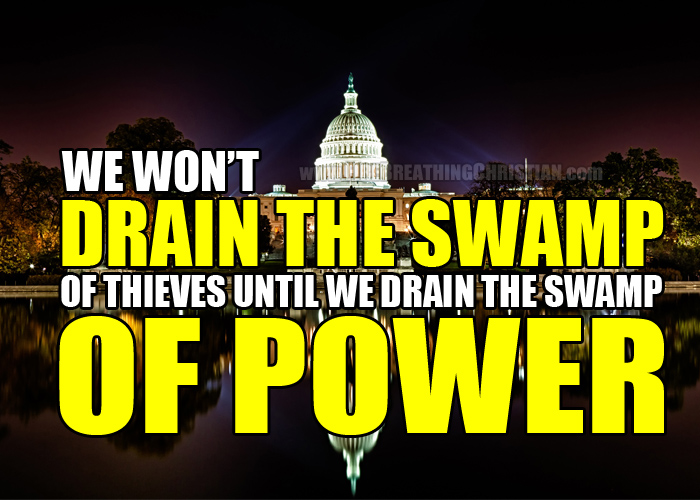 Many who passionately pulled the proverbial lever for The Donald to be come The President did so because they basically wanted to, figuratively if not literally, blow up the DC establishment.

They wanted to drain the swamp.

Or so the slogan went, anyway.

But as with many things in general, and most things DC-specific, the devil is in the details, and those devilish details tend to be very slippery things. In this case, most of those marching under the swamp drainage advocacy banner seem to have bought into a fundamentally flawed notion as to what exactly has to be drained from the swamp in question in order for it to be restored to a place of at least relative peace and harmlessness.

The thing that has to be drained is power.

I would argue in a complete way.

The American DC-centered Roach Motel approach to massively centralized power has to go away.

DC’s power to create magical “money” out of thin air has to go away.

DC’s power to then use that black magic fiat currency to perpetually advance the ever-growing (and otherwise unsustainable) American Orwellian Welfare/Warfare/Security Super-State has to go away.

DC’s power to supervise the education/discipleship of our young in accordance with the official American religion of State-Supervised Polytheism has to go.

DC’s power (which is practically real however illegitimate it may be) to judicially redefine everything from marriage and family to boy and girl has to go away.

With little to no power accrued in DC, few if any professional political thieves will bother to roost and plot there.

Remove State power to magically make fake money out of thin air and then use it to dominate every aspect of the culture and economy, and there will be nothing for tyrant wannabes to feed on.

The trouble is that most of those campaigning the loudest for swamp drainage in DC don’t actually want much of the power to be drained. They want it to stay. They just want “their guys” to use it better in a classic Ring of Power rationalization sense.

They want a massive military.

And they want the black magic economic system that props it all up, no matter how surely that system consigns their own children and grandchildren to an inescapable pit of ever-deepening debt bondage.

Why do they want the State to basically be Mommy and Daddy and God in practice where things like public schools, Social Security, and the Orwellian American Military/Security State are concerned?

Because ‘Merica, that’s why.

Because we’re nowhere near repenting of our Christ-mocking approaches to law, economics, education, and civil government.

So God has given us The Swamp in judgment.

“We the People” will not have Him to rule over us in legislative, economic, and educational practice, so He has given us what we have, and completely deserve, in DC.

He has given us The Swamp.

Until people, families, and the church finally stand up and take their responsibilities back from the State, the Swamp will only continue to fester, reek, and grow in power.

We cannot wait for the swamp to be drained before we seize these responsibilities. It can’t happen in that order. We first must reclaim our roles as people, families, and the church right here and right now, even as the swamp oozes on.

Only when we pursue true maturity and personal responsibility (aka “adulthood”) apart from the dependence-producing, maturity-inhibiting “help” of the State, will we then find the freedom, liberty, peace, security, and prosperity that comes with true biblical adulthood.

The Swamp has little power over such adults.