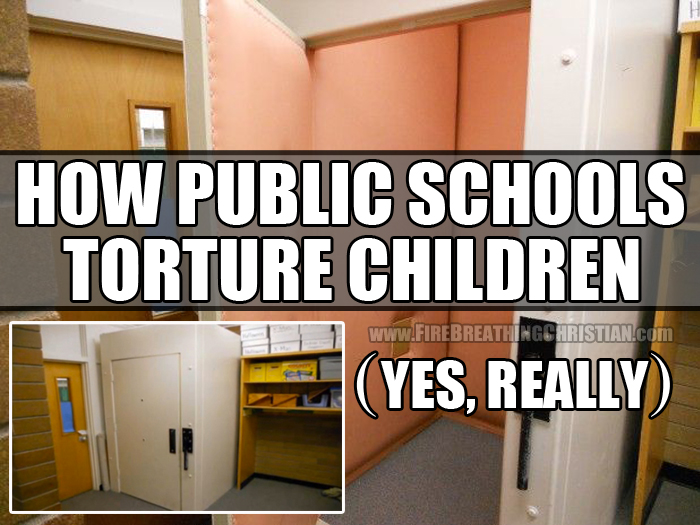 For those of you thinking along those lines, please consider the following:

Imagine that a homeschool family was discovered to have constructed a tiny little windowless padded cell in their basement. Imagine that the homeschooling parents in question openly acknowledged that they used the cell as a “calming place” in which to put unruly children.

What would you think of that?

What would your local mainstream television or radio reporter think of that, and how would they cover it in the news?

And what would your local public school bureaucrats think of that?

Would the word “creepy” come into the conversation? Maybe “disturbing” and “warped”, too?

Howsabout “cruel” and “torture”? Ya think maybe those terms might be found rolling off the lips of public school advocates and homeschool haters upon stumbling across a tiny windowless padded cell built by a homeschooling family for the purpose of calming unruly children?

Early, often, and in print.

Now let’s step away from this hypothetical scenario and move back into the real world – a real world where tiny padded windowless solitary confinement cells are a common part of public school life in America.

Consider a report posted earlier this month by Intellectual Takeout, entitled Solitary Confinement Is Quite Common In Public Schools, which included the following painful-but-necessary-to-confront info:

“If parents were to lock their children in a confined space for a lengthy period of time, it is highly likely that those parents would be arrested for child abuse and their parental rights threatened. (In fact, this just happened in Arizona recently.) If public schools do this, however, the outcome is quite different.

The use of physical restraints, locked “seclusion rooms,” and solitary confinement for children is rampant throughout the nation’s public schools. In a comprehensive 2014 analysis by NPR and ProPublica, analysts found that “restraint and seclusion were used at least 267,000 times nationwide” in the 2011-2012 school year. Schools put children in seclusion rooms approximately 104,000 times in that one year.

ProPublica reports that the restraint and seclusion practices included “pinning uncooperative children facedown on the floor, locking them in dark closets and tying them up with straps, handcuffs, bungee cords or even duct tape.”

Many school officials contend that using restraints and locked seclusion for children are sometimes necessary when children are out of control in the school building and need to calm down. But a 2014 U.S. Senate report on these practices argues that these extreme tactics are unnecessary and damaging to children.

“There is no evidence that physically restraining or putting children in unsupervised seclusion in the K-12 school system provides any educational or therapeutic benefit to a child. In fact, use of either seclusion or restraints in non-emergency situations poses significant physical and psychological danger to students.”

Particularly troubling is that the NPR/Pro Publica analysis of school seclusion and restraint practices found that the vast majority of the cases (75%) involved children with disabilities. In a separate analysis earlier this year, the Education Week Research Center found that 70,000 special education students were restrained or secluded in the 2013-2014 school year.

There Are Serious Consequences for Restraining Children

Beyond the obvious emotional trauma to a child of being physically restrained or locked in a secluded room, these restraint and seclusion practices sometimes result in serious injury.

A 2012 ABC News investigation found that “thousands of autistic and disabled schoolchildren have been injured and dozens have died” from the use of seclusion and restraint protocols in the nation’s public schools.

Writing earlier this week in The Huffington Post, educator Laurie Levy shared a story of a small, first-grade special education girl in her school district who was placed in locked seclusion, “crying hysterically for 45 minutes in what was euphemistically called the ‘Calm Down Room.’”

Levy goes on to write:

“The closet had a panel window that permitted an adult to look in, but the window was blocked by taped-up paper from the floor to four feet from the ground and also at the top, so the child could not look out. This also made the closet rather dark. The child was repeatedly slapping the window with her hands but was not tall enough to see anything.”

Actions that are considered criminal when parents do them are somehow tolerated in the nation’s public schools. Locking children in dark closets or physically restraining them with ropes and ties can cause serious emotional trauma and bodily harm. Parents shouldn’t do it, and neither should the state.”

So now, please ask yourself, using the same standards that we all know would be applied to parents who educate their children at home, is it reasonable to describe the tiny windowless padded cells used to “calm” unruly children in public schools as instruments of abuse or torture?

If words actually mean things (and I know even that’s a stretch in public schools these days, where they can’t even confidently identify a “boy” or a “girl”), then the descriptions of an imaginary homeschool family’s tiny windowless padded solitary confinement cell for children as creepy, dangerous, and abusive should certainly apply to the very real practice of using the same devices in American public schools.

Why is this not obvious?

Why is the consistent application of glaringly relevant terms in situations like this so rigorously avoided by Americans when they are exposed to the truly wicked and dangerous things routinely practiced in their beloved public schools?

Well, there are many reasons for this, but high on the list is that the vast majority of parents have been “educated” (programmed) by the State in State-run public schools.

For more on the vital subject of children’s education, please check out the following articles:

Do you have two hours a day to focus on your children?