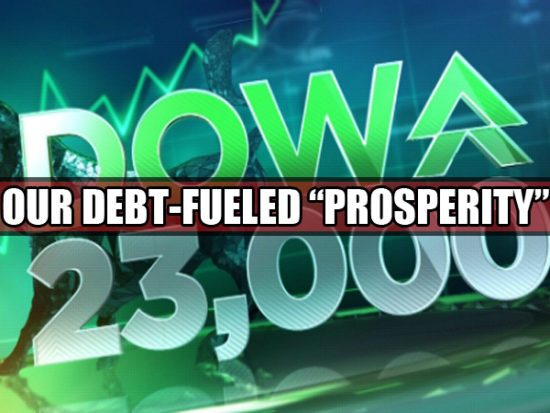 Nothing says American prosperity like the stench of young bodies burning in a furnace to fuel the rank Socialism of America for just a little while longer.

As we endure the predictable waves of Dow 23,000 being pitched as “proof” of American economic strength and vitality, let’s remember how this magical, mythical, and utterly artificial stock price bubble is being inflated, that being: By sacrificing the economic futures of young and unborn Americans.

This is no overstatement.

It is no exaggeration.

Its the simple, cold, hard truth.

Thankfully, more and more Millennials and Gen X-ers are waking up to this truth every day. They’re waking up to the cold, hard fact that they’ve literally been sold into slavery so that previous generations of Americans could have (and continue to have) their All-American Socialism.

How do we keep the farce of Social Security going just a little while longer?

How do we keep the nightmare of public schools and a massive, globe-spanning military rolling along for just a little bit longer?

How do we artificially sustain ridiculously inflated asset bubbles (think: stocks and homes) so that some Americans can pretend to be wealthy for just a little while longer?

We just keep magically printing (or typing) “American money” out of thin air to keep our cherished Marxist constructs rolling along as though the whole system is something other than a long-dead zombie doomed to topple over and decompose into the dust from whence it came. (For more on this important subject, please read Fiat $lavery: We have been bought and paid for…with nothing.)

In the meantime, we can’t seem to feed our young into the furnace fast enough!

And near zero percent interest rates on savings, to boot!

Way to completely decimate and devour the young working people of America!

And what about those poor future Americans who will be born into economic bondage the likes of which most of us could scarcely imagine even just twenty years back?

Too bad for them.

Such is the price of Socialism.

Such is the cost of American Marxism.

Which definitely seems worth of remembering as we cross the Dow 23,000 threshold to resounding applause and proclamations of American greatness.

Almost two years ago, in How do we keep American Socialism going? Get ready for negative interest rates, we shed some (generally unwanted and quite unpopular) light in a direction that most politically active “conservative Christians” don’t want to go, that being the manner in which the very Millennials that they love to whine and complain about have, in fact, been sold up the river to prop up the rank Socialism of the very same “conservatives” doing the whining.

In light of Dow 23,000 and the manner in which many of these so-called conservatives will be happily, loudly, and proudly benefiting from the artificially constructed asset bubbles in stock and real estate markets, it seems like a good time to revisit at least part of that piece from back in 2015:

“One of the things frequently heard during the many commonplace critical rants of older generations against the young is that the younger crew “just doesn’t save money”. They “just don’t appreciate the power of saving” and they “just don’t have the self-control and discipline to apply the power of compounding interest over time.”

Or is that just another All-American sacred cow construct that we’re not allowed to touch on our way to not acknowledging sin and not repenting and not restoring the culture that’s blowing up and sinking into the abyss before our proud American eyes?”

Skyrocketing housing costs (due to the artificial inflation of yet another asset bubble), making home ownership increasingly unrealistic for most working Americans.

All while real income has flatlined for most working Americans since the ’70s…not so coincidentally the same time that the U.S. Dollar completed its transformation into a completely fiat beast by severing all ties to reality under the “conservative Republican” leadership of President Nixon in 1971.

Before 1971, it was quite common for American families to live well on one income.

It was quite common for Americans to pay off their home mortgages in 10 years or less.

It was quite common for Americans to buy new cars with cash.

Think about that the next time you’re promoted to sing about a “land of the free” in tribute to a flag that flies over and empowers the Federal Reserve, IRS, and NSA, to name just a few of the many gigantic tools of Marxism now moving boldly to enslave future generations of Americans…while billing those future generations for the privilege.