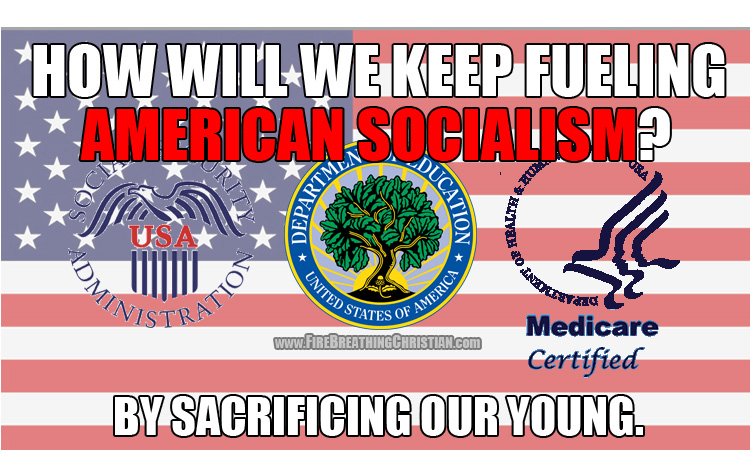 One of the things frequently heard during the many commonplace critical rants of older generations against the young is that the younger crew “just doesn’t save money”. They “just don’t appreciate the power of saving” and they “just don’t have the self-control and discipline to apply the power of compounding interest over time.”

Or is that just another All-American sacred cow construct that we’re not allowed to touch on our way to not acknowledging sin and not repenting and not restoring the culture that’s blowing up and sinking into the abyss before our proud American eyes?

If we’re going to actually repent and restore the cultural train wreck that is America, we’re going to have to deal honestly with sin, beginning with our own, and then work to lovingly confront and correct it wherever it exists, no matter how challenging that path may be and no matter how many sacred cows and golden idols we need to tear down and trample en route to “taking every thought captive to Christ” and pursuing real-world obedience to Him as the only real hope for anything good here or anywhere else in His creation.

The seeds of Socialism planted and encouraged to grow many generations ago are now coming to full bloom and the consequence of pursuing explicitly anti-Christian economic policies over the past 100 years or so is now becoming painfully clear.

One consequence that we want to key on in this article – a consequence that was destined to arrive once this path was first charted many generations ago – is the elimination of the “power of compounding interest” that was still a given in the economic planning of those who grew up in the earlier stages of American Socialism.

What all but the most recent generations of Americans took for granted as a basic tool to be used in disciplined pursuit of long-term economic development and prosperity has – like so many other things – been stolen from the young through older generations’ embrace of American Socialism.

For over seven years now, in order to artificially prop up American “free markets” like the stock market and housing market, as well as the mountain of American Socialism that has come to be adored by even most professing “conservative Christians” in the land, fake money has been printed and typed into existence at a staggering pace…which is, as we all know, one way of very obviously selling our own children, grandchildren, and future generations yet unborn into even deeper dependence and bondage to the American State and its Corporate owners. (See: America’s open economic rape of the young via Social Security.)

This seems like an important aspect of our presently unfolding/imploding economic reality in light of recent developments at the Federal Reserve (which is not federal and holds no reserves) – developments of a sort that have already played out elsewhere in the West, it should be noted.

In Yellen Says Negative Rates On The Table “If Outlook Worsened“, Zero Hedge reported on recent comments made by Federal Reserve Chairwoman Janet Yellen indicating that she is clearing the way for moving our long-running nightmare of artificial “free markets” propped up by way of zero percent interest rate on to the next level of economic madness: Negative interest rates.

Yes, this means that in many if not all instances, those who would like to actually save money in a bank would have to pay the bank for the privilege of giving them their money to hold (and, of course, lend against).

Welcome to where the land of Social Security, perpetually funded perpetual war, Food Stamps, Medicare, State-run “education” and the like was always destined to lead.

And it only gets worse from here, barring repentance and submission to Christ as King in practice.

He is our only real hope for security, social or otherwise.

So even if most of the young’uns in America these days do seem to be quite lazy, apathetic, disengaged, and self-absorbed, remember: Most of ’em aren’t quite as stupid as they’re made out to be by those who sold them up the river a loooooong time ago.

Most of them are smart enough to know that they’ve been sold out.

The only thing that can repair the damage done to people, relationships, economics, and culture by the last 100+ years of our headlong dive into American Statism and Socialism is the Gospel-fueled Great Commission of Jesus Christ.

Only when we each personally strive, wherever we are now in life, to repent of our sin and submit our present and future paths to His will as revealed in His perfect Word will we finally, really, and truly begin to find our way to true and lasting peace, prosperity, security, freedom, liberty, and justice for all.

Maybe when we start modeling faith in Christ as He defines it, we – and our children – will find ourselves less dependent upon, fearful of, and easily controlled by the anti-Christian systems designed to make us slaves.

Maybe when we live a life of obedience to Christ and trust in Him to provide our every need as He has promised, we will find the previously “must have” and “necessary” chains of American Socialism melting away, leaving us truly free to be the men and women that our King has called and equipped us to be.

The only reason that any of these American Socialist/Statist constructs even exist is because we do not believe King Jesus:

“Therefore I tell you, do not be anxious about your life, what you will eat or what you will drink, nor about your body, what you will put on. Is not life more than food, and the body more than clothing? Look at the birds of the air: they neither sow nor reap nor gather into barns, and yet your heavenly Father feeds them. Are you not of more value than they? And which of you by being anxious can add a single hour to his span of life? And why are you anxious about clothing? Consider the lilies of the field, how they grow: they neither toil nor spin, yet I tell you, even Solomon in all his glory was not arrayed like one of these. But if God so clothes the grass of the field, which today is alive and tomorrow is thrown into the oven, will he not much more clothe you, O you of little faith? Therefore do not be anxious, saying, ‘What shall we eat?’ or ‘What shall we drink?’ or ‘What shall we wear?’ For the Gentiles seek after all these things, and your heavenly Father knows that you need them all. But seek first the kingdom of God and his righteousness, and all these things will be added to you.“