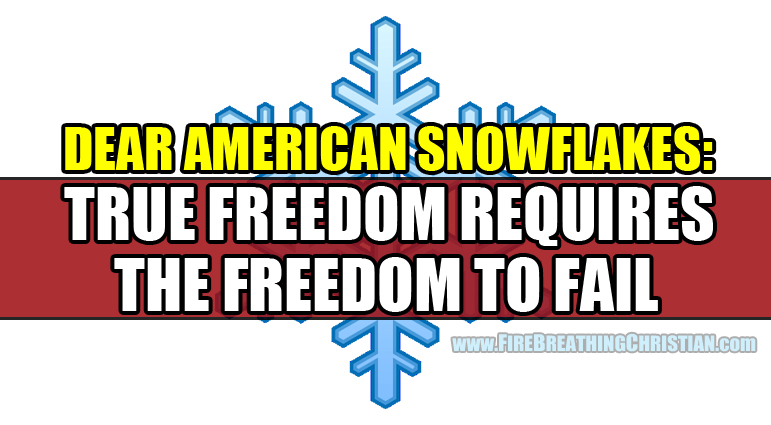 1. The primary purpose of State “help” is to foster State dependence.

2. More and more Americans love – and demand – State “help” in every area of life.

These two realities make it plain that, barring radical repentance and reformation, we are (and should be) a doomed people – and by “people” here I mean the group comprising what is currently called the United States of America.

While I certainly hope, pray, and work towards the aforementioned repentance and reformation, it’s important to acknowledge that there’s precious little tangible reason to believe that such a thing is on the verge (or even on the distant horizon) where American culture is concerned, including (and perhaps especially) in its professing Christian subculture.

We want a massive military that dominates the globe and secures the supremacy of the American State (which we tend to conflate with the Kingdom of God in so many ways that you really have to work hard to miss the rank idolatry of it all…which is precisely what most “conservative Christian” Americans do thanks to generations of State discipleship through public schools).

Acknowledging these hard truths should not to be confused with or construed as pessimism on my part. I’m about as far from pessimistic as is possible, at least as I understand such things, since my hope and confidence is in the Kingdom of God over and above the (apparently) dying wannabe kingdom of ‘Merica. (For more on this, please read The Kingdom of God vs. The (Collapsing) Empire of America.)

To place America anywhere near the Kingdom of God or God Himself in priority is to make America an idol.

Now back to this freedom thing…

In our long-running, multigenerational abandonment of true freedom, true liberty, true security, true peace, and true prosperity – all of which are literally defined and sustained by the Nature of God (which is reflected in His Word) – in our ongoing abandonment and repudiation of these true, Christ-centered and Christ-defined versions of these things, we have bought into counterfeits that can, will, and are leading us deeper and deeper into darkness and bondage.

Which is what any biblically literate Christian should expect, of course.

Christ-denying approaches to freedom will always lead toward bondage.

Which is the path we’ve chosen for a very long while now in America.

Generation after generation, we ship our little ones off to the State for “education” based on the serpent’s approach to the pursuit of knowledge described in Genesis 3, and then we wonder why each generation of product flowing from those State-run schools is more openly pagan, more State-dependent, and more anti-Christian than the last.

Well gosh golly gee, how can this be?!

I know! I know! We’ll “fix” it by getting more George Washington into history class! Yeah, that’s the ticket! That’ll make our All-American spin on the serpent’s pitch in Genesis 3 work!

As insanely ridiculous as this “solution” might sound, it is exactly what most self-described conservative Christians believe (and passionately advocate) as the fix for children’s education in America.

Which, again, is why we are (and should be) at present a doomed people.

Along the way, after generations of running to the serpent for our worldview and approach to the everything-touching subject of children’s education, we’ve created Snowflake Culture.

This All-American Snowflake Culture, despite the frequent expressions of shock, surprise, and ridicule from many of the so-called conservative Christians who’ve been feeding (and advocating feeding) children to the State, is the entirely predictable – and purposeful – consequence of building a culture on the serpent’s Genesis 3 pitch, which went like this (with bold emphasis added):

“Now the serpent was more crafty than any other beast of the field that the Lord God had made.

He said to the woman, “Did God actually say, ‘You shall not eat of any tree in the garden’?” And the woman said to the serpent, “We may eat of the fruit of the trees in the garden, but God said, ‘You shall not eat of the fruit of the tree that is in the midst of the garden, neither shall you touch it, lest you die.’” But the serpent said to the woman, “You will not surely die. For God knows that when you eat of it your eyes will be opened, and you will be like God, knowing good and evil.” So when the woman saw that the tree was good for food, and that it was a delight to the eyes, and that the tree was to be desired to make one wise, she took of its fruit and ate. . . “

Let’s face it: We the People believe the serpent.

We believe that we not only can, but should, set aside the Word of God in order to rightly pursue knowledge (aka “education”).

And the American State completely agrees, of course…which is why it works so hard to teach us accordingly.

Yet no matter how simple and clear this truth is made, we refuse to even consider acting upon it.

Primarily, for most of us, because we’ve been conditioned to believe that “we’re not qualified” to do what God has commanded and equipped us to do as individuals, families, and the church. We’ve become convinced of two things: 1. That we will probably fail at the task demanded of us in Scripture, and 2. Failure is always bad.

This is what we’ve come to demand and expect from the American State.

We demand protection from the risks associated with educating our children biblically.

We demand protection from the risks associated with planning around the financial needs of our latter years.

We demand protection from the freedom to build, operate, and promote ideas, businesses, and careers outside of the detailed supervision and management of the State.

We demand protection from the risks associated with true freedom when it comes to health care, insurance, self defense, choosing a career path, opening a lemonade stand, and how many gallons to flush with.

All while imagining ourselves to be big, brave, and free, of course!

Make no mistake: The State loves this.

The American State loves our open celebration and adoration of State dependence as “the new freedom” in America.

In Why True Freedom Is Now Un-American, we described our silly/sad situation this way:

“What if you saw a very large middle aged woman with her back arched proudly and her nose pointed in the air as she slowly rolled through town on a big, expensive pink bike tricked out with all the latest shiny new accessories…including adult-sized training wheels?

What if as this woman clumsily peddled her ridiculous ride down main street, barely managing to stay upright even with the help of those ginormous training wheels, she went on and on and on about her great cycling skills and the incredible health, freedom, and liberty that her commitment to bike riding had brought into her life?

Whatever your reaction to this scenario, realize one thing: Americans in general tend to look and sound a whole lot like this ridiculous woman when they talk about things like freedom and liberty….while demanding Social Security.

And supporting the property taxes (property theft) used to fund those schools.

And wanting the government to manage every area of life.

Slowly but surely (and not so slowly here lately).

However much our State- and Corporate-sponsored songs and slogans may claim otherwise, we are not a nation of responsible, capable adults free to enjoy the fruits of liberty, including the many hard falls and corrections that come through learning things the hard way.

Instead, we’re a nation of proud, undisciplined children in old bodies, happily dependent on the State for our education, our security, our health, our retirement, and pretty much everything else. All while pretending and proclaiming how awesomely free and brave we are, of course.

Now ask yourself this: Which is sillier – the woman on the bike with training wheels who talks about what a great cyclist she is, or the utterly State-dependent American who talks about how free they are?”

An honest answer to this question is a painful answer, to be sure, but the pain involved is necessary if we’re to ever experience the repentance and restoration that’s required to prevent America from being ground under the heels of God’s righteous judgment.

If we truly love America, we will strive (and encourage others to strive) for repentance and obedience to Christ’s crystal clear and lovingly provided clarity on education, economics, and everything else.

I really is just that simple. (While noting that “simple” is not the same as “easy”.)

If we want the training-wheel, State-provided “help” versions of education, economics, business, and everything else, we will get them. And we will die, as we should (and are).

But when, by God’s grace, we cast aside the “help” of systems built upon the serpent’s pitch in Genesis 3, then – and only then – every truly good thing becomes not only possible, but realized…one step at a time, one overcome challenge at a time, and one otherwise impossible success at a time, all by God’s grace, all for His glory, and all to the benefit of His obedient people.

This is why His Gospel-fueled Great Commission centers on teaching everyone to obey all that He has commanded (see: Matthew 28:18-20)…which is something you won’t be taught in most (if not all) American “churches” that enable and defend things like public schools.

When Christ is cast aside as the necessary, conscious, clear center of anything in His creation, especially something as central and culture-shaping as children’s education, the serpent laughs and culture dies.

May God move us to educate ourselves and our children accordingly…while there is yet time.