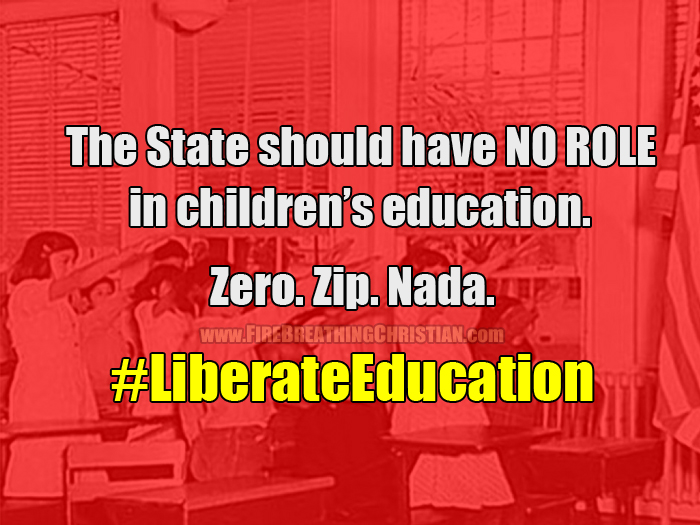 One of the most tragi-comedic displays emanating from self-described Christians in America these days is the way that most of them still excuse, defend, enable, and/or encourage the perpetuation of public schools.

The willful (and suicidal) idiocy of this situation only grows more cringe-worthy as each near-daily revelation of the evil foundation of public schools is met with yet another round of yawn-inducing “shock” and “outrage” from Christian parents who, after expressing said shock and outrage, then keep right on feeding their children to the beast of State-run, overtly anti-Christian education.

The latest “shock”- and “outrage”-inspiring item to make the rounds is a memo from the Orange County Department Of Education, which informs parents who have abdicated their responsibility to secure a Christ-centered education for their little ones by handing over ’em over to the State, that they “may not excuse their children from instruction” related to State-approved materials addressing gender, gender identity, gender expression, and sexual orientation.

But fear not, parents who abdicate your parental responsibility to the State, your beloved school system is – for now at least – still going to allow you to tell your children what you think about the gender/sexuality-related instruction that the State drenches your kids in after said immersion has been completed.

Check out the memo for yourself: 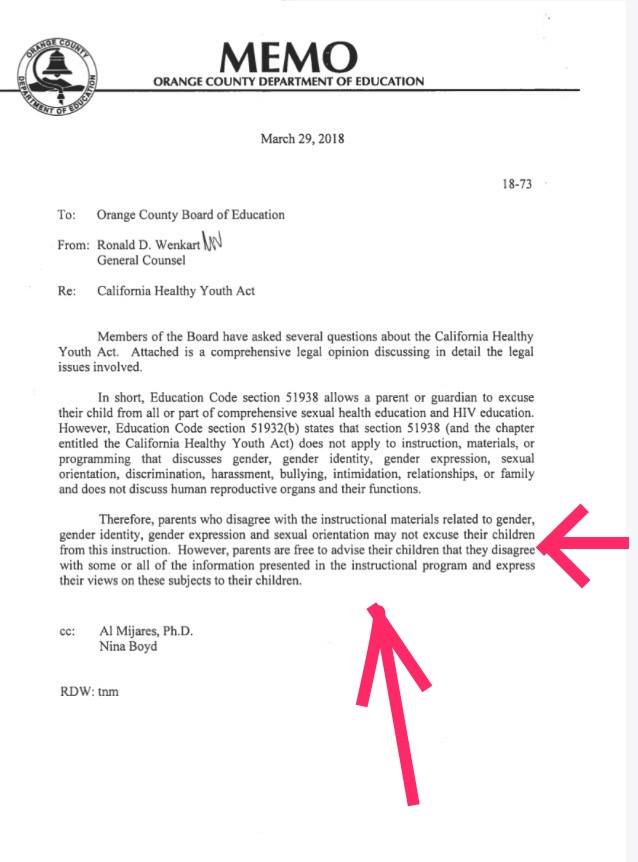 So where are the pastors of America who are supposedly shepherding the masses of Christians who still ignore, defend, enable, and/or even encourage the American State-run “education” system as being somehow valid or legitimate even though it directly opposes (and openly mocks) the very foundation of all truth, logic, law, beauty, sexuality, and every other good thing in God’s creation?

Where are these pastors?

And if they have gotten the Orange County Department of Education memo and the many similar bolts of crystal clarity jumping up and down all around them on a daily basis, what are they doing with that info?

How are they responding to it?

Others, when they’re not holding up an incredibly lame Tim Challies article like a tinfoil wannabe shield, are exercising their right to remain silent, looking everywhere but to Scripture for details on the subject and hoping it all just blows over so they can get back to vacuously chatting about “the wonder of being in Christ” or some similarly vague, undefined, feel-good concept that never seems to be worthy of focus and detailed consideration on subjects like…you guessed it…children’s education. All while kiddos in the families they shepherd are fed to the State-managed beast on a regular basis.

Do I love and respect even many of the pastors in this camp as true Brothers in Christ?

I know some of them very well and love them dearly. Many of them have inspired and instructed me in a variety of significant ways, for which I am grateful.

My point is not to broadly paint all in this camp as non-Christian. My aim is to splash some cold water in their faces and, by God’s grace, wake them from their slumber.

The time has come to sound alarms.

The time has come to stand.

The time has come to repent.

The Lord has spoken. Let’s actually love Him in practice by taking seriously every word He’s said on this subject and every other, shall we?

The American culture is dying dramatically all around us first and foremost because we as Christians have not behaved as though we actually believe Christ is Lord over every detail of life right here and now. We’ve abandoned that approach to His lordship because, in large part, we’ve been encouraged to do so by negligent pastors who are looking for any excuse to avoid the front line battle that’s been raging on the subject of children’s education for generations now.

Even so, in the middle of all of this neglect of children and resistance to the lordship of Christ, there are precious, faithful shepherds who are actually willing to suffer the consequences of standing tall, speaking clearly, and holding fast to the Nature of God as revealed in His Word on the subject of children’s education.

Thank God for those faithful few!

May their number increase, and soon.

For more on this important subject, please consider the following articles:

If a system can’t define “boy” and “girl”, we shouldn’t send boys or girls to it for an “education”.
10 Evils Parents Teach Their Kids By Sending Them To Public School