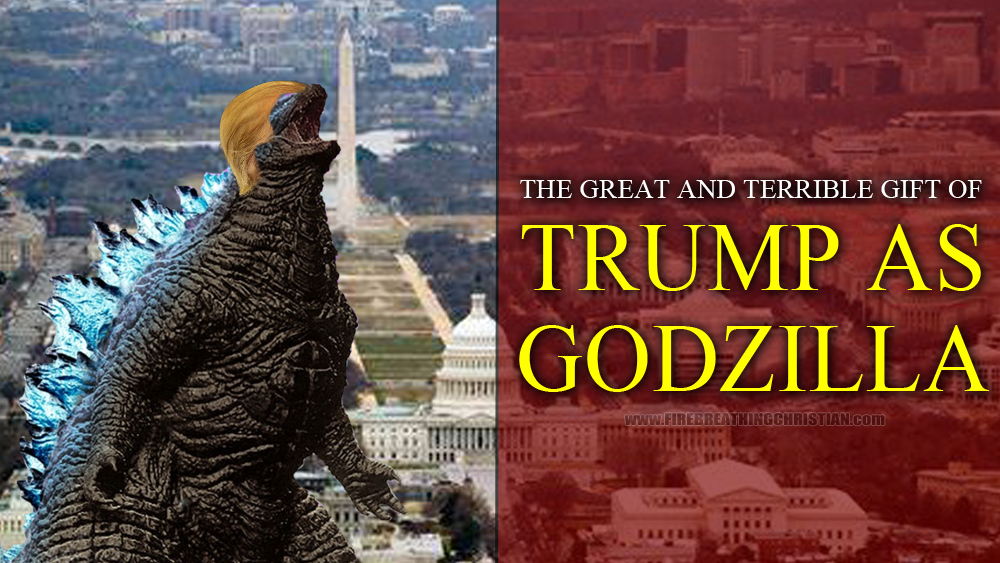 As we watch and wonder at the cultural convulsions escorting us through the death of old concepts, systems, and lies that have defined much of our past and present as a people, it’s important to at least try to get a solid grip on reality as it actually is, as opposed to what we’re told it is or what we wish it was. As we finally experience the long overdue end of massively culture warping “Emperor Has No Clothes” scams and Matrix-style systematic deceptions, we are very well served to do our best to notice what is actually going on here.

One great big awesome thing that’s going on right now is President Trump in the role of Godzilla, actively decimating the DC power structure (intentionally in some ways; unintentionally in many others) while fighting off a variety of much-worse-than-Godzilla monsters who love, adore, and depend on DC and the centralized, Big Government approach it epitomizes.

For the sake of full disclosure and in an effort to give readers a better sense of the context in which I see things and share these thoughts, here are a handful of points that inform my understanding and motivate my appreciation of President Trump as Godzilla:

So in this context, right here in 2020 in the fast fading U.S.S.A., along comes Godzilla…

And yeah, I’m really happy about that.

Like the farce of our contrived unity and the flagrantly anti-freedom, anti-Christ “indivisible union” at the heart of our madness.

It’s easy to understand why pagan power brokers and leaders on the pagan political Right and Left all want to preserve and use the Ring of Centralized Power. What’s less understood, but is rapidly coming into focus for more and more people thanks to Godzilla torching DC, is that the Ring of Power is not a path to a happy place. It’s a tool of darkness and mass bondage.

We cannot make an economic construct based on counterfeit wealth and mass slavery work.

We cannot set aside the Word of God in our approach to reality – an approach first pitched by the serpent in Eden (Genesis 3) – and expect it to work out well in the long run.

We cannot chant Bible verses and caress Ten Commandments plaques and expect that to do the trick.

We actually have to repent and obey King Jesus in practice.

Obedience to Him is not an option.

There is no other way to make any nation great (or “great again”) in His creation.

Jesus is King. His commands are commands. And “we the people”, however much we may imagine ourselves immune to such things, will soon be wiped off the face of His earth if we don’t get with His program.

The land that we call America is not ours.

This is why we’re living Psalm 2, Godzilla style.