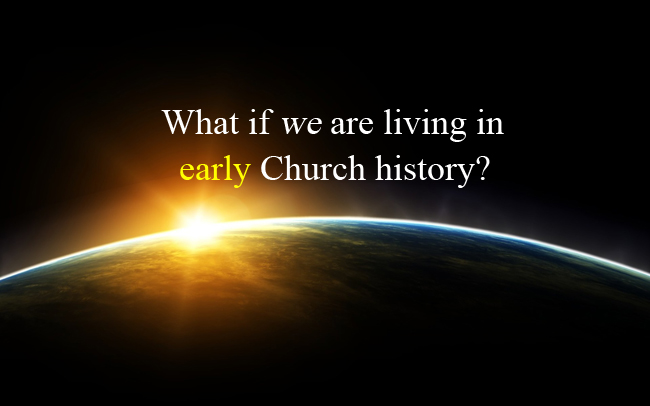 What if we are at this moment going about our lives in a day that is much closer to when Christ initiated His Great Commission than it is to the day that He will physically return in total triumph?

What if there are thousands and thousands of years to come before He returns?

For some – especially many of those immersed in the theology and eschatology (“end times”) that’s most popular these days in America – these questions are inherently depressing and might even be a sign of heresy or unbelief on the part of anyone asking, much less seriously contemplating, such possibilities. (In the interest of full disclosure and hopefully as an encouragement to others, I myself was one of these folks not that many years back.)

Most professing Christians in America have been so immersed and colored by dispensational “rapture” themed perspectives espoused and promoted by the likes of Hal Lindsey and Left Behind mythology that they’ve conflated them with core Christian orthodoxy. Making matters even wackier, the same folks who are most inclined to vigorously build their worldview upon this conflation of Left Behind eschatology (see: Encouragement from Satan) with biblical theology tend to be the same folks who go on and on about the “faith of our fathers” and the “founding principles of America” as good things.

Yet the faith of those who settled the lands that eventually became the United States was very much a faith of optimistic confidence in Christ’s Gospel-fueled Great Commission. The bulk of those supposedly cherished and revered founders came here in the first place largely because of their belief that Christ’s Gospel and Great Commission really, truly, and actually would be successful here on earth in time before the physical return of the King. They actually believed that the Spirit of God – the third Person of the Trinity – really lived within them and that the Gospel was empowered to multiply the presence of Spirit-filled New Creatures in Christ who would, by virtue of their supernaturally inspired new nature, increasingly conform everything that they touched to the Nature of God as revealed in His Word.

Yes, they actually believed these things, and this belief – this faith – is what motivated them to do what they did…you know, all of the awesome stuff that we claim to be so impressed by and thankful for. (See: 7 Empowering Truths for Politically Active Christians.)

Yet where they believed those things about Christ, the Spirit within them, and the Gospel-fueled Great Commission, we generally do not. (See: Christianity in a Box: Containing the Contagion of Obedience to Christ and Beware the “Gospel in a Bottle” .)

In that context, please consider the following question:

If their uniquely magnificent and awe-inspiring accomplishments in the 200-ish years preceding the formal founding of the United States are a shining testimony of their true faith, then wouldn’t it stand to reason that the radical deterioration of American culture and civilization in the 200-ish years since the founding of the U.S. is a testimony of a false faith that, somewhere along the way, uprooted and replaced the true that they brought over and planted so long ago?

Not only do most American professing Christians not believe as those Christ-centered pilgrims did, they tend to be quite hostile to the beliefs of these people whom they at the same time claim to revere and respect. While expressing a desire to return to the faith of these fathers on one hand, modern American evangelicals tend to openly repudiate the very faith in question with the other.

The fire-breathing Calvinistic and decidedly non-dispensational worldviews that settled America many hundreds of years ago now represent a narrow way that is rejected and even despised by most of those in the land who claim both a love for Christ and a respect for those pilgrims.

This would seem to explain much about why we have fallen so far since the time of those faithful, biblically grounded people.

We seem to want the fruits of a certain worldview without wanting the worldview itself, and that, my friends, ain’t gonna happen.

But all is not lost.

Anything but. (See: Roaring into Post-America Christianity.)

Even at this very moment as you read these words, Christ the King is building and moving among His remnant. He’s opening eyes, opening ears and replacing dead hearts of self-serving, idol-adoring stone with living hearts that beat for Him. He’s uprooting the lies of the His enemies from the minds of His people and replacing them with the truth of His Nature as revealed in His Word.

While moving His people to true depth and maturity in preparation for the great mission at hand, He’s inspiring them to ask and ponder hard questions.

Questions like: “What if we are living in early Church history?”