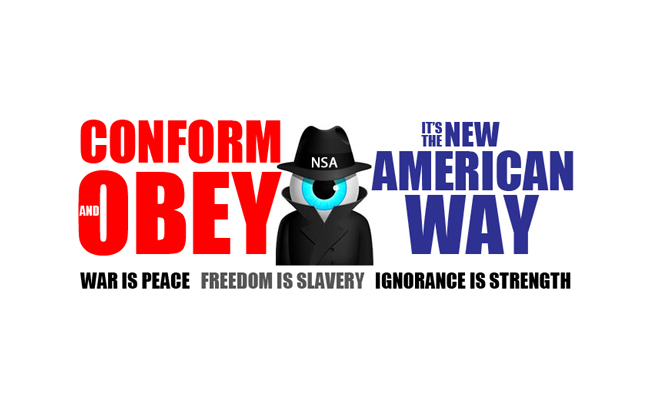 Okay, so let’s put on our thinking caps and try real hard to concentrate for just a second or two and consider the (probably very significant) relationship between two points…

1. The NSA needs to “protect our freedom and liberty” by gathering information on the citizens of the United States on a scale and at a level that is unprecedented in all of human history and would make the KGB and Gestapo weep with envy. (See also: So the American State has to destroy our freedom in order to protect it? Oh yeah, that makes sense.)

2. The Pagan Right and Pagan Left puppets atop our contrived, controlled system of political theater are both obsessed with power and, more often than not, have some rather remarkable skeletons lurking in their closets. (See also: Privacy is for masters. Transparency is for slaves. Welcome to “the land of the free” and the home of the NSA.)

So what could go wrong with this combo, right?

I mean, if the American State is now openly in the business of slurping up pretty much every bit of info that it can on every “free”, “private” citizen in the land (all for their own good, of course), and in that process The State manages to acquire all of the most delicious, damaging, and incriminating info on the political puppets central to its mirage of representative government, then how much easier has NSA-style “data acquisition” made it for the Almighty American State to keep potentially anti-Statist politicians from even thinking about opposing the Statist agenda in a meaningful manner?

Consider the case of former Speaker of the House Dennis Hastert, who has recently become embroiled in controversy after it was revealed that he paid a man a small fortune over time to keep a certain “past indiscretion” secret.

Maybe Hastert actually believed in things like “secrets” being possible here in the “land of the free” and the home of the NSA, but he should have known better. The government and Statist-brand of “patriotism” that he and his pals on the Pagan Right promoted in the wake of 9-11 have made such things as secrets impossible, or nearly so, in our Brave New America. (See also: How American Conservatives happily forge the chains of American Socialism.)

This is what it looks like when Americans worship and promote the American State as their god in practice.

This is the hell that builds when proud Americans refuse to bend their knees in broken repentance and submit to Christ as King in practice.

May God grace the people of this land that brokenness and repentance of past and present America idolatry so that we might shatter the shackles of American Statism while there is still time, and submit to Christ as King in practice, all by His grace, all for His glory, and all to our eternal benefit. (See also: Roaring into Post-America Christianity.)